In this article, you'll read about one of the most important spiritual leaders of the 20th century. His teachings are as relevant in the 21st century as they were in the past. 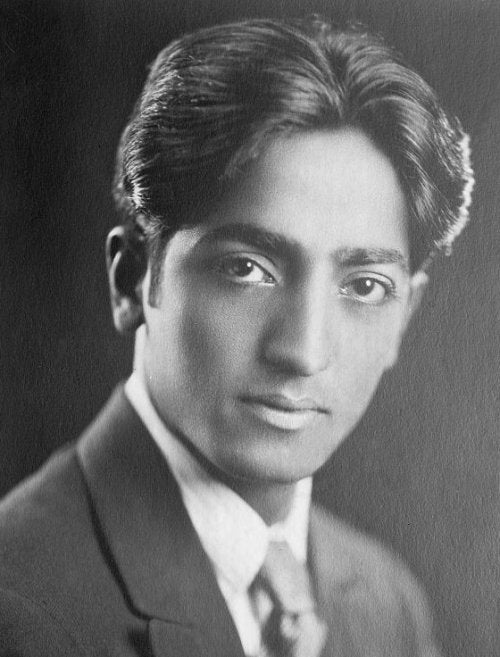 Jiddu Krishnamurti is one of the most accomplished spiritual leaders of the 20th century. Before his 18th birthday, the Theosophical Society chose him to offer the society’s wisdom to the world. He underwent training by the Order of the Eastern Star.

For over 20 years, he trained in the Order but rejected their offer to become their leader. He then started a journey around the world to preach his teachings, urging people of the need to make a global change.

He never took part in any religious groups. His focus was on understanding why humanity should rid itself of fears, anxiety, jealousy, pain, and anger. In the end, his legacy is still alive in his speeches, literature, interviews, letter, and articles.

Jiddu was born into a Hindu family, in a little city south of India. He was a sickly child and believed to be mentally disabled. Some sources claim he was mistreated by his father and some teachers.

When he was 10 years old, his mom and sister passed away. This was very hard for him. However, he found peace in nature. In 1909, he met Charles Webster Leadbeater, a so-called fortune teller that said he was impressed with the boy’s aura. He was then proclaimed as the future guide of humanity.

Webster belonged to the Theosophical Society and, under their watchful eye, Krishnamurti was educated at Adyar, and later abroad. He was adopted by another member of the Society, Dr. Annie Besant. She became a mother figure for Krishnamurti.

The Theosophical Society and Jiddu Krishnamurti

In 1911, the Theosophical Society founded the Order of the Eastern Star for their new teacher: Jiddu Krishnamurti. That same year, he moved to London. He gave his first speech there and also published his first writings. For the next three years, the traveled around Europe, closely followed by his theosophical supporters. After World War II, Krishnamurti went on a world tour.

In 1922, he traveled to California and met one of the most influential people in his life, Rosalind Williams. They both founded the Happy Valley School, but their romantic relationship didn’t work.

During the same year, Krishnamurti went through what he later described as an “intense spiritual awakening”, where he experienced mystical union. His brother, who had accompanied him during all those years, died shortly after, a victim of tuberculosis.

After his brother’s passing, Krishnamurti no longer believed in Theosophy. He even managed to dissolve the Society. This didn’t sit well among members of the organization.

Solo tours and other worries

For the next 14 years, Jiddu Krishnamurti traveled the world, giving speeches and writing articles. After this, he went back to India in 1947 to give a conference tour for thousands of young intellectuals.

Krishnamurti ruled out religion and political ideologies from his life, as he believed these were the factors that divided humanity.

His teachings went beyond the belief systems established by man. As he strayed away from the guru image, he didn’t discuss traditions or schools of thought in his conferences. Instead, he talked about his knowledge of the human mind and what he believed to be sacred. He took as his own the challenges posed by scientists and psychologists.

The legacy of Jiddu Krishnamurti

Jiddu Krishnamurti died of pancreatic cancer when he was 90 years old. His body was cremated and his ashes scattered throughout India, England, and the United States, the three countries where he made an impact.

He founded several schools around the world and also founded the Krishnamurti Foundation, which still runs several schools. His followers keep his nonprofits working, spreading his teachings.

Truth is a pathless land

The grand core of Krishnamurti’s teachings is his 1929 declaration of truth as a pathless land. He taught us that man can’t get to it through organizations, beliefs, dogmas, priests, rituals, or philosophy.

To him, truth can only be found through understanding and observing what’s in our minds. Man has surrounded himself with symbols, ideas, and beliefs. This dominates his thoughts, therefore dominating his life and relationships. The name and shape of our cultures shouldn’t define us, they’re superficial by tradition. Instead, we need to free our minds.

The Six Blind Sages and the Elephant: Learning to Value Other People’s Opinions
Do you value other people's opinions? Do you take into account perspectives that are different from your own? Here's a great story to teach us! Read more »
Link copied!
Interesting Articles
Biographies
Emmy Noether: Biography of the Woman Who Revolutionized Physics

Biographies
The Life of Ryszard Kapuściński, a Famous Journalist