Jane Goodall and How She Became a Worldwide Expert and Activist

Jane Goodall revolutionized the scientific landscape by showing the world that chimpanzees and humans aren't so different after all. What makes us similar? Read on to find out. 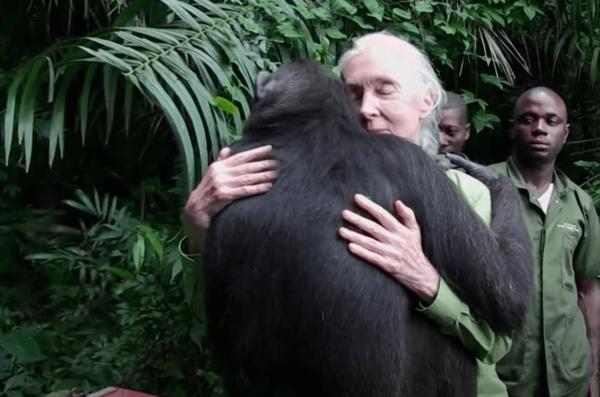 Jane Goodall is the world’s leading expert on chimpanzees and fights tirelessly for their conservation and respect. It’s impossible to try to summarize decades of primate study in just one article. However, we’ll try to bring together her great contributions to the understanding of primate behavior.

It’s equally impossible to capture in just one article her extraordinary personality, her commitment to our world, and her kindness. For this reason, this article will try to encourage you to find out more about this incredible woman. She’s one of the best examples of how small changes can make a real impact on our world.

“Habitat destruction is often linked to greed and materialism of the developed world.”

She was an animal lover from childhood, but it was after reading Tarzan of the Apes that she really felt inspired to go to Africa to study animals. She says she was jealous because Tarzan had married the wrong Jane!

Her first experience observing animal behavior was when she was four years old and wanted to understand how chickens laid eggs. She spent more than four hours in hiding watching them. She was so absorbed that her parents called the police, not knowing where she was.

Her mother reacted to what she did with great interest and allowed her daughter to tell her what she had discovered. Jane always said that, thanks to her mother’s interest, a scientist was born that day.

On a personal level, her case is perhaps the best example of how encouraging children’s curiosity and helping them to experiment for themselves and question things is the right way to help them grow up happily, committed, and passionate about what they do.

The first time she traveled to Gombe, she did so accompanied by her mother. At that time, it wasn’t considered safe for a young, single woman to travel alone to that area. They spent four months there during which Jane could only observe the chimpanzees from a distance.

She was able to obtain her doctorate in ethology, which allowed her to continue studying primate behavior. In 1960, paleontologist Louis Leakey sent her to Tanzania to study the social and family interactions of wild chimpanzees. That was the start of several exciting decades of field studies.

One of the first things Jane Goodall discovered about chimpanzees when she was only able to observe them with binoculars from a distance was that they were able to build and use tools.

This ability was thought to be exclusively human, so this discovery showed that chimps are much more like humans than was previously thought. This claim, like many others, wasn’t well received in the scientific world.

She studied how they used their calling sounds and non-verbal language as a way of expressing fear or sadness, or as a sign of threat or danger. This was also a revelation, as nobody imagined these typically human behaviors could be present in primates.

“Now we must redefine ‘tool’, redefine ‘man’, or accept chimpanzees as humans.”

Maternal behavior in chimpanzees and humans

Regarding maternal behavior, we have examples that, today, we could equate with two different styles of parenting. Jane Goodall observed that, in general, mothers were protective and favored the independence of their offspring. They took care of them and stimulated them to favor their development, just as human mothers do. This is what we know today as secure attachment.

However, she also observed a chimpanzee by the name of Passion, an indifferent and insensitive mother. Her indifference demonstrated the importance of maternal behavior and secure attachment for the correct development of the offspring, just as with humans.

She discovered that the babies were dependent on their mothers for many years, while they learned to fend for themselves by imitation. In particular, she studied the case of Flint, a male chimpanzee, who, as a “teenager”, continued to suckle and require constant attention from his mother, Flo.

His mother was old and died in an accident one day. Flint found her and, after spending a long time observing, returned to the community. He seemed to become more and more depressed, stopped eating, and died soon afterward.

Flint’s case could be extrapolated to Spitz’s study on the effects of mother and child separation. Separation can cause the child to experience an anaclitic depression or hospital syndrome, which can lead to death from marasmus (a form of severe malnutrition).

Only a very small percentage of Jane Goodall’s findings have been made known, only the most significant ones, and those that most easily relate to understanding human behavior. However, her studies were the basis for all subsequent research with chimpanzees.

Her research has made her the most important primatologist in the world, which is why she’s won multiple awards.

Criticisms of Jane Goodall and her work

As soon as she entered university to do her doctorate, she was accused of wrongful research methods. She was criticized for naming the chimpanzees, as they said this was unscientific and suggested anthropomorphism. Still, others criticized her for attributing emotions or feelings to them and for suggesting they had different personalities.

People tried to discredit her on numerous occasions simply because she was a woman. This happened especially when she suggested the similarity between humans and primates.

Headlines attributed her success not to her incredible work but to her beautiful legs and blonde hair. Ignoring the criticism, she actually used some of it to her advantage to get more funding to continue her studies.

From researcher to activist

After the Chicago Academy for Conservation summit where the impact of deforestation was made clear, she left the field and became an activist. Thanks to her fight for the conservation of these primates and their habitat, she’s considered a “world ambassador for chimpanzees”.

In addition to this, the Jane Goodall Institute offers numerous educational programs and conferences to make humans aware of the impact our behavior can have on nature and to encourage respect for animals and the environment.

She believes that no matter how much intellect human beings may have, they can’t be called intelligent, as they’re destroying their only home.

“Now that we have finally realized the terrible damage we’ve done to the environment, we’re doing our utmost to find technological solutions.”

Five Jane Goodall Quotes to Reflect on
These Jane Goodall quotes have a wonderful purpose: to restore human beings' respect towards nature. She's one of the most revolutionary scientists. Read more »
Link copied!
Interesting Articles
Biographies
Picasso, a Biography of the Father of Cubism