James Vicary's experiment was a very popular 1956 experiment that took place in the United States. Said experiment supposedly proved that people can be mentally manipulated with, what he called, "subliminal advertising". 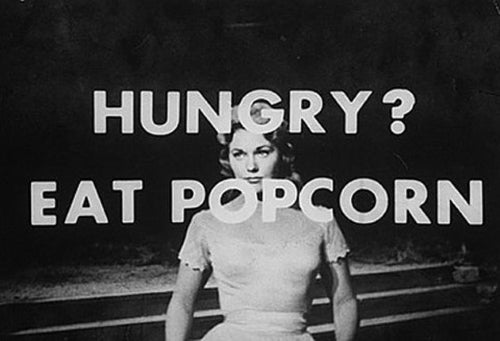 During the 50s, everyone talked about mind control and brainwashing. At the end of the decade, James Vicary conducted his famous experiment on the supposed efficacy of subliminal advertising. Over time, his conclusions were criticized. Nevertheless, they’re still a source of inspiration.

James Vicary’s experiment is probably the most famous in advertising. His test was so notorious that, since then, people believe subliminal advertising is successful. Many nations around the word forbade this practice and similar techniques to what Vicary used in his famous experiment.

James Vicary was a famous market researcher who was born in Detroit in 1915. He was a pioneer of consumer behavior studies and how consumers react to different types of publicity. James Vicary’s experiment was the first, and only, experiment focused on subliminal perception.

The experiment of James Vicary

As we stated above, during the decade of the 50s, there was a lot of interest in mental phenomena. Particularly, hypnosis and the unconscious mind became very popular. James Vicary had an idea for an experiment in which he wanted to prove the effect that subliminal perception could have on people; how it could induce people to buy using cinema, for example.

Vicary conducted his experiment during the screening of the film Picnic in Fort Lee, New Jersey. He showed a few hidden phrases during the movie, which said “Drink Coca-Cola” and “Eat popcorn”. For this, he used an instrument called a tachistoscope that was able to show several images in a short period of time.

The images were at high speed, so the audience didn’t consciously notice them. In other words, he showed the signs to the audience but nobody could see them consciously. This was the goal: to prove the impact of messages directed at the unconscious mind.

Once Vicary finished his experiment, he published a report on it. In this report, he claimed that, after being exposed to the subliminal messages, Coca-Cola purchases went up 18%, while popcorn purchases went up 57%.

Soon after, London’s Sunday Times newspaper ran an article on both the experiment and Vicary’s report on.

Almost immediately, there was a sort of mass hysteria. Later on, writer Vance Packard wrote the book The Hidden Persuaders. It helped consolidate people’s panic and alarmed many different governments.

Since then, the concept of subliminal advertising came to be. The American government threatened to take licenses away from any media that used these techniques. Afterward, this type of propaganda was forbidden in several countries. By their own account, the CIA started studying this novel method.

Over time, people started to suspect Vicary’s experiment, mainly because its author refused to share information about the methodology he used. Likewise, Doctor Henry Link, a specialist in experimental psychology, dared him to repeat the experiment. However, Vicary refused to do so.

The Advertising Research Foundation (ARF) asked Vicary to give them detailed information about his experiment but he refused to answer. Later on, the radio and television chain CBS tried to conduct a similar experiment. They sent subliminal messages urging the public to call their station at a given time but this didn’t happen.

Finally, in 1962, in an article published in the magazine Ad Age, James Vicary confessed that he never conducted said experiment. He made it up because his company was going through tough times and he needed notoriety to keep it afloat.

What the experiment ended up proving was that society is gullible and that they believe anything that comes from a “scientific” source, with the help of mass communication media. Many governments around the globe still forbid subliminal or dishonest advertising.

The Psychology of Social Media Trolls
Why do some people attack other people on social media? What kind of psychological issues explain the actions of social media trolls? Read more »