The Iceberg Theory and Our Decisions 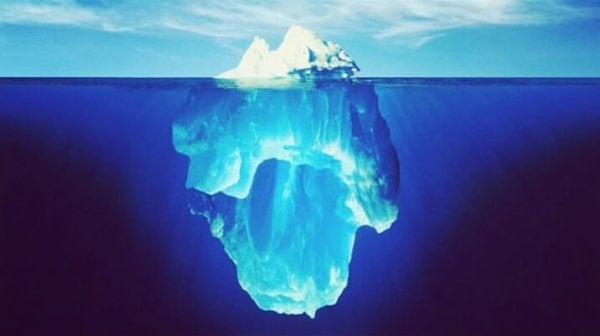 Hemingway’s Iceberg Theory has been applied throughout history to different areas from literature to human resources, and we present to you today this theory applied to the field of psychology.

Hemingway’s theory in psychology is to say that we only deal with that which we perceive with the naked eye. The rest goes unnoticed, which can be compared with an iceberg. That is, there is a conscious part of the information, but there is also another unconscious part.

Imagine you are traveling in a boat, and in the distance you catch sight of an iceberg, you look at it, and what do you see? A mass of ice. But, underneath that iceberg is another gigantic mass of ice hidden from our view which maintains it and keeps it solid.

When we look at the reality we have before our eyes, we see the surface, the visible. This, according to the iceberg theory, is only 20% of the total. And the rest? That corresponds to the unconscious part: 80% of the total. This can be compared to the ins and outs of our mind and all its processes that we do not see.

As an example, think of the many times we convince ourselves of an idea, and we stubbornly follow the easy path. This option would be one that supports or favors our idea. We no longer try to figure out if we are confused or wrong, but rather we just seek information to support and defend our hypothesis.

Why don’t we try to check to see if what we are choosing is false? Why is it that most of the time we do not debate about costs or benefits?

Could it be that after making a sudden decision, new questions and problems come to light that we had not taken into account? We as human beings tend to run a program of cognitive economy by which we choose the information that requires less effort and is related to our way of seeing life.

For example, we believe that a situation has been created by different issues. For example, my friend told me such a thing because she wants to be like me, because she’s envious of me, because she cannot bear the fact that I’ve had so much luck in my life… And actually, it may have been for many other causes, but we’re so convinced of what we have created, and any comments that come to mind we relate to our hypothesis.

Remember that most of the time we maneuver hypotheses and conclusions based on the information we have, which is not nearly the total information that exists. Caution with decision-making!

Most of us want to be successful. Perhaps we want to improve our relationship with our partner. Or maybe we'd…