How to deal with a breakup with no explanation (ghosting) 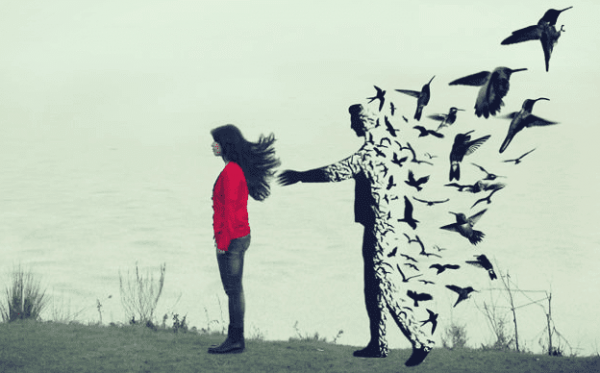 Many people let someone come into our hearts under one condition: that they don’t break it. We take action and warn them against it, but still they do and they catch us off guard. This can happen when there is, for example, a breakup without explanation, when from one day it’s as if they used disappearing powers and are just gone, without a “we have to talk,” “I’ll call you” or “I’m sorry, this is is over.”

They say that all broken people are made through unresolved stories. Somehow, the worst things that happen to us spin around in our minds, evoking uncomfortable remnants of that past that still stings. Now, sometimes this type of breakup is more complicated. Because more than being made of unresolved chapters, we are left with stories with no end, shadows of people who left us overnight without giving a reason.

We know that the subject is not new. In the United States, where it is custom to giving a label to each trait, this behavior or dynamic is called “ghosting.” This is the act of vanishing from someone’s life- a person who until recently you had an emotional bond with- is something that is becoming more common, to the point that, on average, this is starting to happen to everyone one or two times in their life. Or worse, we may even be the ones who “ghost” others.

Although it is often said that leaving someone without giving an explanation is a male art, we must consider a couple of aspects. Abandoning without giving a reason is not an art, it is disregard for the other person and a sign of immaturity. Also, this act is not done by males exclusively.  Men and women both ghost, and it is even more prevalent in this era of new technologies where it is possible to end a relationship with a single click and/or a simple block on social media.

A breakup without explanation and the unsuccessful search for why

There is no written law that tells us before leaving someone, you have to tell them why. Nobody forces us to have that final conversation, to list one by one the reasons for our decision, for the change. Nor have we signed a contract that obliges us to explain why our hearts no longer beats in the same way or why the illusion of the relationship has ended.

That’s the truth. Nobody governs the rules of what should be done or not in an emotional relationship. However, there is the sense of ethics, of moral and emotional respect, and of maturity and courage. These type of principles aren’t something we are born with, but instead are learned during upbringing. Because of this, there are many people who must face a breakup without explanation and everything this entails.

Although there is not too much clinical literature on all the psychological processes that the abandoned person tends to experience, we can say that they almost always occur with the same dynamics. They are the following:

How to handle a breakup without explanation?

There are no abandonments without motives. Breakups without explanation occur more frequently than we think and it is necessary to know how to handle them, respond to them and, most importantly, survive them. Let’s see some guidelines that can help us in these cases.

Calls that are not answered, messages that are not returned. Social profiles blocked. Days that become weeks where there is no communication, no contact or even less presence. Contacts, friends and relatives of the person who dodge us and give us excuses.

We could look for even more clues, but this is pretty clear evidence that the other person has abandoned you and wants to end the relationship. Avoid drawing out the inevitable and proceed to accepting what has happened: we need to say goodbye to the other person through their silence.

They will tell you to “turn the page,” “assume it’s over,” “forget that person.” All this will come a little later. The first and most necessary step is to validate ourselves and what we feel. It is time to recognize the wound, to cry, to externalize that pain and to rediscover ourselves, even though we might be broken.

We must let it happen and let it flow.

No matter how hard we try, it will not always be possible to talk to the other person and find out why they ended the relationship. So that is something that we must take on ourselves: we are obliged to give shape to a breakup without a final conversation. We are going to have to give ourselves a resolution to that chapter, and for that we must combine courage and responsibility.

If there is something that remains after a breakup without explanation, it is pain and anger. We must understand that these two dimensions do not fade away alone with the passage of time. They are resistant, they embed themselves and they can completely condition our life.

Let us learn, therefore, to handle them. To do this, start new activities, use the support of friends and family, start projects that excite us and allow us to channel those complex emotions that can undermine our identities and destroy any new happiness.

Focus on the present moment to heal

When you’re facing a breakup without explanation, you can end up living anchored in the past and in the conditional time. “What would have happened if instead of that he had done something else? What if he had said this? Why did not I realize what …? “

This type of reasoning is a source of undoubted suffering.

Finally, we have one more task. Make our current suffering a constructive learning process. It is clear that few pains are as deep as the wound of abandonment, however, our human potential can allow us to get out of it. We can survive that breakup without explanation, and we can continue because we have the tools for it.

The Premack principle can make confinement more bearable for several reasons. Firstly, because it's an ideal psychological tool to improve…

Wellness
Why We Fall in Love with the Impossible

Perhaps it is because we read or see many stories of love or we really like suffering. However, there are…

Wellness
8 Reasons You Need To Take Time to Be Alone

As social human beings, which we are by nature, in some stages of our life, we dedicate too much time…