How to Break the Cycle of Negative Interactions in Your Relationship

Sometimes, no matter how hard you try, you can't stop fighting with your partner. A better understanding of how human communication works can help you put an end to these negative interactions. 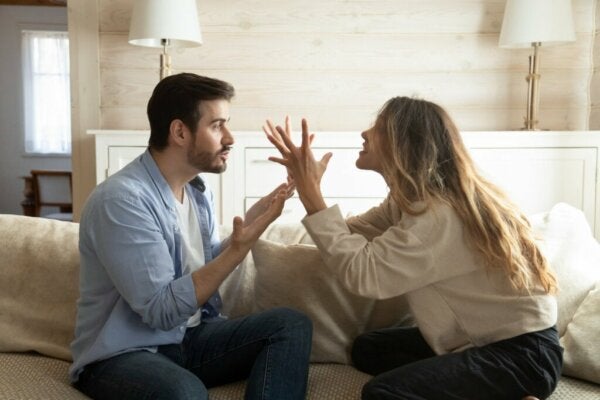 When you share an emotional bond with another person, you’re always going to have good streaks and bad streaks. In romantic relationships, those dynamics are often more intense due to the amount of time you spend with your partner and the intimacy of your connection. It might seem like the state of your relationship is at the mercy of fate, but it depends almost entirely on your actions and those of your partner. Today, we’ll tell you how to break the cycle of negative interactions in your relationship.

Have you ever felt like you couldn’t stop fighting with your partner, no matter how hard you tried? You start the day with the best of intentions, but one misinterpreted gesture or word and you’re at it again in the blink of an eye.

In those moments, you might feel as if your relationship isn’t long for this world. However, before you make any rash decisions, keep reading. Understanding how human communication develops can give you some clues about how to break the cycle.

The origin of negative interactions

When you live with someone or spend most of your time with them, they’re there when you’re at your best and your worst. They’re the ones who get to witness your stress, your physical and mental fatigue, your anger, and your bad moods.

Relationships work best when they’re balanced, but there are days when one of you will give 80% and the other 20%. Other days, it’ll be the opposite.

Therefore, if your partner answers your question in a way you think is rude or makes a passive-aggressive comment, it’s important to be assertive. In an ideal world, you’d respectfully communicate to them how they made you feel. Unfortunately, however, it isn’t always easy (or possible) to act this way. Thus, often, your automatic response is to get offended and resort to indifference, disdain, and the silent treatment. You may also overreact and respond with something equally hurtful.

If this happens every once in a while, you shouldn’t worry too much. It’s practically inevitable. If this pattern repeats itself and becomes the norm, then you have a problem.

Communication patterns tend to repeat themselves

Communication between two people is essentially a constant feedback loop. When you communicate with another person, you aren’t doing it from a neutral place. Whatever you say is, in many ways, a response to what you’ve seen, heard, or felt from them before. The trajectory of the interaction you’ve had with someone predisposes you to react positively or negatively.

The same is true, of course, for your significant other. Some couples hardly ever fight, and others find themselves in a constant state of conflict. This happens because certain communication patterns have taken root. Once they’re there, it’s difficult to change them.

Let’s say your partner says something that bothers you. Thus, you react with an angry comment or irritated silence. The other person then feels hurt, so they respond inappropriately as well. Neither person is willing to concede and you both think it’s the other person’s fault.

We clearly remember the comments and actions that make us feel bad, but it’s harder to realize how your behavior is contributing to this negative dynamic with your partner.

How to break the cycle of negative interactions with your partner

This communication problem can be hard to fix because both partners blame the other person and no one wants to take responsibility for taking the first step. If you’re aware that both people are feeding these unhealthy dynamics, then you’ll realize it’s possible to create something better. The key is to stop simply reacting to the other person. Instead, decide what kind of gestures, words, or interactions you want to communicate with.

Take the first step to creating new communication patterns. Once you’re in the habit of negative interactions with your partner, they tend to repeat themselves. The good news is that positive interactions work the same way. Consequently, when you change your contributions, your communication will change. When you get to that point, it won’t matter anymore who’s to blame, or who did what, because both partners are contributing. You don’t have to fight about who started it, but you’ll be able to talk about who ended it. You can be that person. Remember that the power is in your hands.

Over time, you’ll get better at identifying these patterns when they start. That’ll make it easier to see how the negative interactions snowball and you’ll be prepared to stop them in time. In conclusion, it’s important to be aware of what your partner is contributing and of your own role.

Couples Separated by the Pandemic
Love in times of uncertainty isn't easy and even more so for couple separated by the pandemic. This hard situation puts us to the test. Read more »
Link copied!
Interesting Articles
Culture
Five Films to Work On Children's Self-Esteem

Cinema is more than just a fun day out – it can also be a valuable educational and training resource.…

Counterdependency is a new word that describes a phenomenon that's also relatively new: affective detachment due to fear. For many, the normal human thing to do is strengthen bonds with others.…

Culture
Stephen Hawking: The Man of The Stars

Stephen Hawking is perhaps the most famous living scientist of our time. His prestige is probably only comparable to that of Albert Einstein…