Being Happy Does Not Mean Being the Best 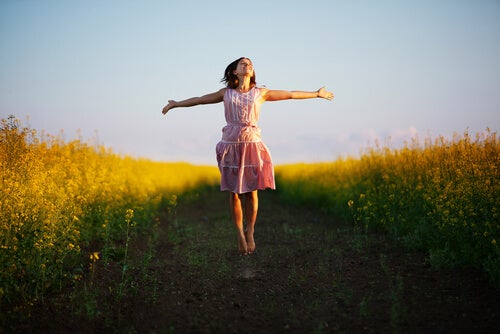 In our society, being the best has become one of the most important goals. From a young age, our performance in different areas is evaluated with numerical grades, with no regard for whether we enjoy what we’re doing or not.

People who get an ‘A’ on almost everything are the “best,” which allows them to earn the acceptance and admiration of those around them.

In general, this approval makes them feel really good about themselves. Who doesn’t like being recognized for their merits and valued for their achievements?

On the opposite end, those who don’t perform outstandingly on things that everybody thinks they should be good at end up receiving insults from their peers, professors, and even their own parents. Some parents reprimand or punish their children because if they’re not the best, they’ll never become a useful adult.

Being the best to gain self-esteem

When you’re the best at something, it usually makes you feel complete. Being number one raises your self-esteem because it attracts the admiration of others, as well as other positive consequences that we value almost too much.

When we say positive consequences, we’re talking about things like fame, success, money…Things that we value disproportionately in our society, and that we have to fight tooth and nail for, no matter the cost.

Everybody wants to be the best at what they do, because if not, what’s the point?

This is the trap of self-esteem, or the love that you have for yourself. We often associate self-love with external characteristics, which creates a dependent type of self-esteem.

That’s why it doesn’t make sense to try and gain self-esteem by listing off your virtues and achievements, since it doesn’t necessarily make you love yourself more.

Being the best, the most hard-working, the most attractive, the friendliest, the number one in the class –  it’s all just air. It doesn’t have any value in itself and it does less than you think. It makes you think that being the best is the most valuable thing that exists, and unfortunately, almost everyone believes that.

You don’t gain more self-esteem by being better than anyone else, nor does it make you any happier. If that were the case, there wouldn’t be so many successful, famous, rich, attractive people who have confessed to being very unhappy and whose lives have ended in tragedy.

How many famous athletes have ended up in the world of drugs because they couldn’t handle all the demands – both from themselves and their coaches – that they were subjected to? How many actors, singers, and artists have ended up taking their own lives or being victims of their own abuse?

What happened to the whole ‘being the best will increase your self-esteem and make you happy’ thing?

Being the worst and still accepting yourself

Wanting to be the best serves only to give you a good dose of anxiety. The culture of effort; of being a worthy man or woman; of winning at life through blood, sweat, and tears – all this has done is create a multitude of unhappy people. Souls who want to achieve self-imposed goals that they have no reason to pursue, since nobody is obligated to do so, and it won’t add any cash to their wallets of happiness.

In addition to anxiety, wanting to be the best can also plunge you into deep depression if you’re not able to be everything you wanted to be.

In the end, the only thing you’ll achieve is that your happiness and self-love will depend on external factors, rather than having a foundation within you. Therefore, if you want to stop being complicit in this irrational idea, you can start by practicing unconditional acceptance. Acceptance and self-esteem might seem like the same thing, but they’re actually different.

Healthy acceptance doesn’t depend on being the best or the worst, the most attractive or the ugliest, the smartest or the least intelligent. Acceptance consists of liking yourself, loving yourself, taking care of yourself, and pampering yourself regardless of who you are or what you’ve done. You simply love yourself because you’re a person, valuable by virtue of being born.

Nothing external can contribute more or less value to a human being because people aren’t measured quantitatively. There’s no ruler that you can use to measure anyone’s worth. All of the judgments that we make towards ourselves and other people are a product of culture, a social construct.

We invite you to reflect on the following: imagine that you’re the worst at something – at work, in class, in your friend group – and despite that, feeling happy and content with yourself. It’s possible, isn’t it? Well, if you’re capable of putting yourself in that place in your imagination, then you can start to move towards it in the real world. We hope it will be a path full of wonderful discoveries!

3 Habits to Boost Your Self-Esteem

Link copied!
Interesting Articles
Psychology
Your Child Will Follow Your Example, Not Your Advice

Psychology
Use Your Mind to Protect Your Heart

You always hear public service announcements warning of the risks your lifestyle can pose for your health. Obesity, a sedentary lifestyle, bad…

Psychology
Psychology of Attraction: What Draws Us To Other People