It's hard to summarize the number of philosophical questions that 2001: A Space Odyssey raises. This Kubrick work is a visual experience for the viewer, given that they witness human evolution from the bone to the conquest of space. But if there's a character that sums up the human in itself, it's HAL 9000. 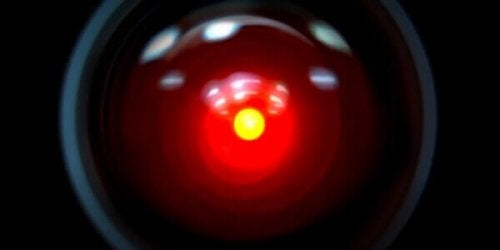 To this day, the emblematic film 2001: A Space Odyssey continues to surprise and captivate viewers. It’s crazy to think that this magical movie was made in the year 1968. But one thing’s certain: this film has nothing, absolutely nothing to envy the science fiction of today. It’s a masterpiece from start to finish. In fact, many people believe that this is the best film ever made. Evolution and intelligence, machines and men, HAL 9000 and Bowman, and an ending that still leaves the viewer speechless. These are the components of one of the greatest works of cinema.

Few films age as great as this one. 2001: A Space Odyssey gives us the greatest temporal ellipsis ever seen: from the launch of a bone to a spaceship. That’s the way Stanley Kubrick summarizes human evolution.

The film has little dialogue, as it’s a purely visual experience accompanied by a great soundtrack. There’s no need for words; it speaks for itself, putting the main reflections of humanity before the viewers. It manages to combine science with the mystical and skepticism with spirituality. In addition, it even makes you question your own intelligence and the technological advances that exist and will exist in the future. This film presents inventions that were quite unthinkable at the time. In fact, there’s a character who, without being a man, is very human: HAL 9000.

It’s impossible to summarize in a few words what 2001: A Space Odyssey means, not only due to its great contribution to cinema but also due to the experience itself. For this reason, we’ll be focusing our attention on the iconic HAL 9000 smart computer. However, we first must review the plot (or plots) of the film.

We can’t pretend that 2001: A Space Odyssey is a work of mere distraction. In reality, it’s quite an innovative film, to the point where watching it is a unique experience. The script was written by Stanley Kubrick and Arthur C. Clarke. In fact, it was inspired by the latter’s short story named The Sentinel. This film is visually spectacular. However, it’s also important to take its soundtrack into account. This is because it’s a fundamental component that gives it a formidable philosophical foundation.

The film is based on philosophical, scientific, and evolutionary questions that humans beings have always wondered. The chosen soundtrack is, for the most part, the work of Richard Strauss. The composition of Also Sprach Zarathustra (Strauss, 1896) wasn’t done randomly; it refers to a symphonic poem inspired by the homonymous work of Friedrich Nietzsche in which he exposes, among other arguments, his idea of ​​the Übermensch or Superman. This idea of ​​the Superman, as well as the idea of the eternal return, are two fundamental pillars of this film.

We talk a lot about evolution but little about the future. When we think about evolution, we immediately associate it with the idea of “we came from monkeys”. However, we rarely think about the future of our own evolution. However, when we watch this film, we can’t help but think: “What if we still have a lot to evolve? What if we’re only one step away from finally getting to the Nietzschean superman?”

Moreover, what this Kubrick film proposes goes beyond the purely skeptical. In fact, it combines the idea of evolution with that of a superior, more developed, and almost alien intelligence. Now, it’s important to mention that, parallel to the main plot, there’s another one linked to the HAL 9000 computer. As a consequence, this makes the viewer think about the nature of all technological advances and leads them to doubt their own idea of what’s human.

The main plot is definitely related to evolution. At first, you can observe a group of primates that, thanks to the appearance of a monolith, managed to create certain tools. You witness the birth of the first man. Suddenly, a temporary ellipsis leads you to the moment when men conquer space. The second monolith appears, symbolizing that man is prepared to evolve but, in order to do this, he must destroy his own creation to avoid being surpassed by it. This creation is, of course, HAL 9000.

Then, the following monolith transports you to a new spatial and temporal dimension, which makes you reflect on human life and the passage of time. Finally, the last monolith appears in a scene that’s been related to Michelangelo’s Creation of Adam. What you can see there is the death of man and, in turn, the birth of a new being that’ll be returning to Earth: the superman.

The creation of man – a perfect machine that rebels against its creator. Is it a metaphor for humanity itself? HAL is surprisingly human. Actually, not even its creators can tell if it has feelings (and it certainly does). So what makes us human?

HAL 9000 is the fundamental piece of the mission to Jupiter on the Discovery spacecraft. Discovery astronauts don’t really know the true purpose of their mission. They designed HAL to never make a mistake. It’s the perfect machine! In addition to this, they programmed it with a single goal: to carry out the mission and not reveal its nature to the occupants of the ship.

Everything seems to run as it usually does until, after a conversation between HAL and Bowman, HAL reports a failure to Bowman, which ultimately turns out to be wrong. How is it possible for a perfect computer incapable of making mistakes to be wrong? This makes astronauts mistrust HAL. Because of this, they want to disconnect it. HAL can’t hear them, but he’s able to read lips and, upon discovering the astronauts’ plans, he experiences a very human feeling: fear.

So what exactly happened? They programmed HAL not to fail, but also not to reveal the nature of the mission. Bowman’s response sparks certain uncertainty in HAL, it feels as if the mission won’t achieve its goal. Therefore, HAL must decide between telling Bowman the truth to avoid jeopardizing the mission or maintain secrecy, something that could lead to a failed mission. At this point, HAL faces a dilemma and it sees no way out other than lying (another very human thing).

Thus, HAL 9000 stops being just a machine; it becomes obsessed with the mission and behaves irrationally as a consequence of its suffering. HAL owns its thoughts and feelings and is aware of its own existence. Upon learning that they want to disconnect it, the most human fear of all appears: fear of death. In this way, Kubrick anticipated one of the dangers of our time: the moment when machines overcome and dominate humans.

Many stated similarities between 2001: A Space Odyssey and Homer’s Odyssey since the word “odyssey” already appears in the film’s title. Nonetheless, what’s interesting here is that we see how the character of HAL 9000 is similar to Polyphemus. The latter has only one eye, something that visually reminds us of HAL’s red “eye”.

Polyphemus attacked and assassinated Ulysses’ companions and, finally, Ulysses defeated Polyphemus. He did this by getting him drunk, stunning him. On the other hand, HAL rebels against the astronauts and kills them. Finally, Bowman manages to disconnect HAL who, little by little, loses consciousness until it dies. Bowman, being the only one who manages to survive, becomes the superman.

In short, what Kubric proposes is a deep reflection on human nature and intelligence. This film, especially its end, is an experience, a journey to the depths of humanity. With hardly any words spoken, Kubrick managed to capture a film that delves into countless philosophical questions and gave the world a character like HAL 9000. A character that, without possessing human form, is extraordinarily human.

Stanley Kubrick: The Life of a Genius
The name Stanley Kubrick brings to mind cinema, perfection, symmetry, and depth. He is recognized as one of the great influences on 20th-century filmmaking.  Read more »
Link copied!
Interesting Articles
Cinema, Television, and Psychology
3 Films with a Strong Feminist Message