Erin Brockovich - The Antiheroine Everyone Needs

Erin Brockovich is one of those movies you watch at least once in your life. It's based on real events and is about a real woman who challenged everyone to stop injustice against many underprivileged families. 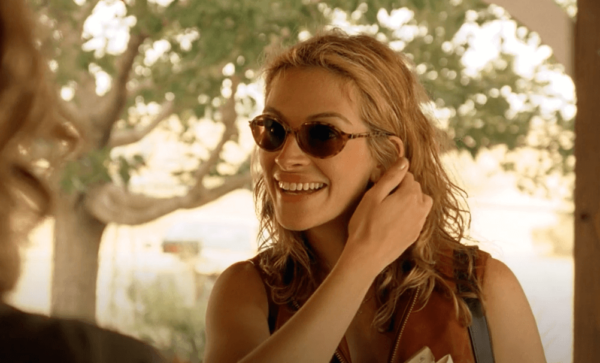 Erin Brockovich is a legal drama based on the true story of a woman who helped win the largest settlement ever paid in a class-action lawsuit in America.
Steven Soderbergh directed the film and Julia Roberts earned the highest salary ever paid to a female movie star at the time. The film had five Oscar nominations at the 73rd Academy Awards.
Erin’s story is that of a single mother of three. After losing a personal injury lawsuit, she asks her attorney, Ed Masry (Albert Finney), if he can help her find a job. As a file clerk, she finds some information about a little-known case brought against Pacific Gas and Electric. Thus, she begins to investigate the details of the case, convinced that the facts just don’t add up.
Eventually, Erin discovers a systematic cover-up of a very dangerous practice: industrial poisoning of a city water supply that threatens the health of an entire community. The film delves into Erin’s personal struggle to find justice for people who didn’t even know they needed it.

“We must be our own superheroes.”

Twice divorced and raising her three children on her own, Erin Brockovich has a hard time finding a job. She has no diploma, speaks a language that isn’t compatible with the formal sphere, and her stilettos are longer than her skirts.
She becomes the heroine of a poisoning scandal by a large and powerful electric company. The actress takes on the eponymous role of the film and injects all the energy and drive she needs to muster into the character. Her performance is a true stellar turn, one that turns this production into a resounding success.
The film tells the hard-to-believe but true-to-life story of Erin Brockovich, a somewhat grouchy former beauty queen. A low-wage employee at a small law firm, she managed to build a huge legal case over contaminated water. The $333 million settlement to be paid by Pacific Gas & Electric is the biggest in the history of the United States.
Susannah Grant’s script strays from the courts and the judges’ rooms, though. The film focuses on a woman’s journey of self-discovery triggered by a passionate conviction that she must help correct a serious mistake. This is because the plaintiffs are people like her. Hard workers whose well-being is threatened by corporate indifference and disdain.

Erin has a traffic accident due to the recklessness of another driver and it leaves her with some muscular sequelae. Thus, when she loses her case against the other driver, she nearly blackmails her attorney Ed Masry (Albert Finney) into hiring her to work at his Los Angeles law firm. She isn’t fond of the rest of her colleagues, as they’re uncomfortable with the way she dresses and her language. Despite everything, Erin becomes good at her work.
She comes across some medical records that confuse her while she organizes a file. In fact, she uncovers a water supply poisoning in California’s Mojave Desert and a cover-up by the PG&E. Brockovich begins to notice some strange things surrounding Pacific Gas and Electric’s offerings to homeowners in Hinkley.
Thus, she proceeds to investigate and visits municipal water archives to see if the groundwater in the area may have been contaminated with hexavalent chromium. Her logic: it’s probably related to the horrible illnesses that Hinkley residents suffer from.

Erin Brockovich, head of a family and ready for anything

Leaving her children under the care of her boyfriend, a motorcyclist named George (Aaron Eckhart), Erin travels hundreds of miles in her rickety car to visit potential victims. Thus, she connects emotionally with many of the people affected by this situation. Most of them are humble, vulnerable, and concerned about their families. From the beginning, they’re kind to Erin and trust their personal stories to her.
The relationship between Erin and her boss Finney is central to the story. Furthermore, the love-hate relationship between these two characters from two different generations gives the film a comedic touch.
Even so, the depth of the relationship between them is evident throughout the film. He’s aware of Erin’s great family burden, so he accepts her manners. He notices her authenticity and risk-taking nature. She’s just what he’d like to be but doesn’t allow himself to be.

A fascinating yet sober film

Finally, the film is an aggressive and linear reality-based drama about a low-income mother. Soderbergh delivered a film that many sectors recognized: the audience, the critics, and the film festivals. He himself was his main competition for the Academy Award for Best Director. He lost the one for Erin Brockovich but won it for his movie Traffic.
The film shows some of the motifs that recur in his previous works as director, such as an interest in the sinister nature of large corporations, female independence, and individual and collective capacity for self-awareness and learning. However, it’s clear that Soderbergh curbed his experimental inclination, taking the less-is-more approach to the naturalism and brilliance of all performances.
Joaquin Phoenix’s Speech: For Sentient Beings and the Environment
Joaquin Phoenix's speech barely lasted three minutes. That was enough, however, for it to reach people around the world and touch their hearts. Read more »
Link copied!
Interesting Articles
Culture
The Prince of Tides: The Tragedy of Silence

Today, we decided to talk about The Prince of Tides, an oldie but a goodie that is, unfortunately, still relevant today. Sexual…

Culture
Most Frequent Linguistic Errors in Children Aged 3 to 6

When children begin to talk, they make a series of linguistic errors. These are a result of their learning process.…

Wonder is a simple, family-oriented story that came about in a time when readers seemed to be caught in the spell of fantasy and dark stories. It was published in…