Edward Scissorhands, A Story About Acceptance 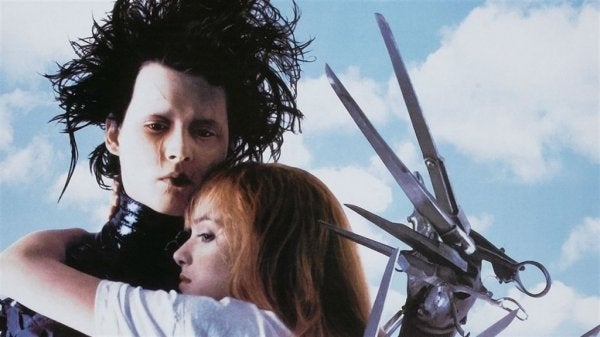 Edward Scissorhands, directed by Tim Burton in 1990 and starring a very young Johnny Depp and Winona Ryder, is considered by many to be Burton’s masterpiece. Its soundtrack is a highlight, composed by Danny Elfman, who has become an idol himself.

The aesthetics of the film are notable, from the credits on, with aspects that recall other works by the director, like The Nightmare Before Christmas (1993). Your first step into the movie, into a dusty but magical ancient mansion, is your first clue that you’re looking at the purest of the “Burton Universe”.

In the form of a story, almost a fable, mixing fantasy with everyday life, Burton gives us a movie full of emotions and feelings. He brings to life a story with two messages that stand out: the importance of accepting our differences and the importance of leaving our prejudices to the side.

Edward Scissorhands is a very personal story with an autobiographic tone, although it’s presented as fantasy. Burton has spoken often of the problems in his childhood. In fact, he has always defined himself as a loner and even “weird”. His ex-wife Helena Bonham Carter recognized in him certain characteristics of Asperger’s syndrome.

Edward Scissorhands, a story of contrasts

Burton presents the movie as a story told by an old woman to her granddaughter. Then we delve into the fantasy. It all starts in a colorful neighborhood full of gardens and single family houses.

There’s not a single black car, door or item of clothing in the neighborhood. In all this color, an old, decrepit mansion stands out, in the back and on top of a hill. I’ts gray and black, with echos of German expressionist cinema.

The first character we meet is Peg, mother of two children, who works for the cosmetics company Avon. In a desperate attempt to sell her products, Peg decides to go into the mysterious mansion. When she gets there, she comes across strange trees carved into the shapes of animals and humans.

The mansion, which looks so dark at a distance, has a totally unexpected garden; it’s beautiful and very colorful. It’s like an announcement of the extraordinary inner life of its inhabitant. Here, the music plays a key role as Peg enters the mansion.

For sure, Peg expected to find something terrifying or horrifying. However, she finds a wonderful, magical place. The mansion is totally neglected inside, covered in dust and spiderwebs.

We see a few newspaper cuttings stuck on a wall, with titles like: “child born without eyes reads with his hands”. Soon afterwards, we meet Edward, the strange inhabitant of the strange mansion. Instead of hands he has scissors.

From the start, Edward is very innocent. You see it when he talks about his father, saying that he “didn’t wake up”, a clear sign of his lack of knowledge about the world, life and death. Peg, fascinated by the scars the scissors caused him, decides to try her cosmetic products on him and invites him home.

Now we are witness to all the difficulties Edward experiences as part of society: differentiating good from bad, the hurtful rejection he initially triggers in his neighbors, and then their fascination once they discover that they can use his abilities as a gardener and hairdresser.

The neighbors represent pure morbidity, acting out collective thought, and they are a faithful reflection of how those ideas change depending on the circumstances, in such a way that their opinion of Edward is not their own but rather collective.

Burton shows us how difficult it is to be accepted when you’re not like everybody else. He awakens curiosity in some and fear in others. We see how the neighbors are gossips, spreading rumors and criticizing Peg and her strange guest.

Edward fits in quite well in Peg’s family and bonds with her young son and her husband. However, when he meets Kim, her teenage daughter, certain feelings wake up in Edward. But he doesn’t know how to express them. The relationship is hard from the beginning because of her prejudices. Over time, though, she starts seeing in Edward the person he really is and what a huge heart he has.

When his neighbors start admiring him for his ability as a hairdresser and gardener, Edward actually gets popular and they even offer to set up a beauty salon for him. Edward and Peg are guests on a television program where they explain Edward’s situation and the audience comments and asks questions. It’s interesting to see how when “different” becomes an attraction, it triggers fascination. Edward is no longer different; he is special.

“-Audience: But if you had regular hands you’d be like everyone else.

-Audience: Then no one would think you’re special. You wouldn’t be on TV or anything.

-Peg: No matter what, Edward will always be special.

Conflicts return when Edward agrees to help Kim and her boyfriend commit a crime. This is when we return to Edward being looked down upon for being different. Society starts to see him as a monster. Someone who is dangerous and thus needs to be eliminated. The neighbors who once so admired his talent are now afraid; they make up stories and want to see him dead.

There is a moment, a small gesture, that should be highlighted. It’s the scene where Edward is being chased by his neighbors; he is alone and they all want to see him dead…

But a dog sits beside him; Edward cuts his fur so that he can see better and the animal shows his gratitude. This little moment is truly magical because here Burton shows us how animals know no prejudice. And sometimes they are much more understanding than people.

Burton shows us a pure character with social problems from living isolated for too long because of his condition. Few see Edward as a good, innocent man. The mansion is a reflection of this character: huge, imposing, dark railings serving as a shield to protect the magical, sensitive garden.

Much has been said about Burton and Asperger’s syndrome, and it’s hard to know exactly what his childhood and life were like. But we can see certain characteristics of Asperger’s in Edward, like his clumsiness with his hands, his trouble fitting in, and his rich inner world.

Without a doubt, Edward Scissorhands teaches us a wonderful lesson about acceptance. It teaches us not to be afraid of differences and to look inside a person to see who they are.

“Sometimes you can still catch me dancing in the snow”

Embracing Acceptance and Change
In life, we're often faced with situations we don't know how to react to, and we can either move towards acceptance or avoidance and denial. Read more »
Link copied!
Interesting Articles
Cinema, Television, and Psychology
Can Voldemort's Life Help Us Understand Evil Better?