How Do Dogs Recognize Faces? 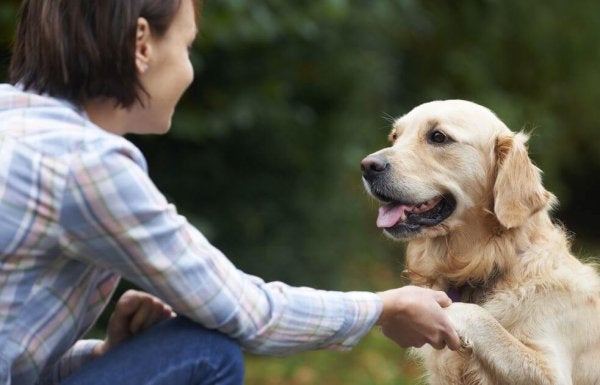 Dogs are one-of-a-kind animals that, when well-behaved, are an inexhaustible source of companionship and love. They’re always ready to play, follow you around, and be with you. They’re the first ones to notice when you come home and usually the happiest to see you. You can be gone for five minutes, and when you come back, they show the same amount of affection as if you’d been gone for a year.

They have sensitive ears and highly accurate noses, but they also have a good sense of sight, a sense that doesn’t usually take the main stage for them, but that they certainly use, especially for movement. They also use it to recognize people, and in this article we’re going to attempt to explain how.

“Properly trained, a man can be dog’s best friend.”

How do we recognize faces?

For humans, the visual recognition of faces is a process that occurs in the brain quickly and efficiently. This process is not only notable because it’s fast or because it’s connected with long-term memory; it also stands out because it’s “falsely selective.” If that weren’t enough, there is even an area of the temporal cortex that’s specifically dedicated to facial recognition.

What do we mean by “falsely selective?” If you’re not Japanese and you don’t live in an area with a high Japanese population, when you see a group of Japanese people, their features seem very similar to you. You might even feel like you would completely confuse one for another. This would happen to you with both Japanese men and women.

This doesn’t happen because there’s less variability between their bodies than there is between people you can easily distinguish; it’s because you’re not accustomed to differentiating their faces. This is largely due to the fact that it wasn’t too important for your ancestors to know how to differentiate between one Japanese person and another, and save for special cases, it isn’t for you either.

Before entering into the canine world, we’d like to point out that in human beings, there is even a disorder related to facial recognition called prosopagnosia, or face blindness.

“If a dog will not come to you after having looked you in the face, you should go home and examine your conscience.”

How do dogs recognize faces?

Generally, dogs look at us from below, and if you look back at them for a few seconds, they tend to tilt their heads like they’re asking you what you want. Facial recognition is a part of the advanced social behavior that dogs exhibit with humans.

In an evolutionary sense, it isn’t crazy to think that being skilled at recognizing human faces was a huge advantage for dogs in the face of a threat. Being able to perfectly identify the person who took care of them versus people who didn’t treat them well likely ensured their survival and therefore increased their chances of reproducing.

Various studies have been done on facial recognition in dogs. Through studying their eye movements, researchers have discovered that dogs are capable of differentiating between familiar and unfamiliar faces, as well as between familiar faces and those of their owners. These studies have also shown that the faces of other dogs call more attention to them than those of unfamiliar people.

In one study published in Animal Behavior, researchers found that dogs pay more attention to their owners when the owner’s face is exposed rather than covered up.

Finally, studies that analyzed brain activation in dogs through MRIs have identified two areas of the brain involved in facial recognition:

There’s no doubt that dogs love the faces of the people who show them affection. We’ll end this article with a funny video to demonstrate:

Culture
The Four Paths of Yoga

Yoga is an ancient discipline that people nowadays practice like a sport. However, if what we're looking for is its true practice, we must follow a series of guidelines. In…