The way that children and teens behave often says a lot about their family dynamics and relationships, which is why psychological therapy can be so important. 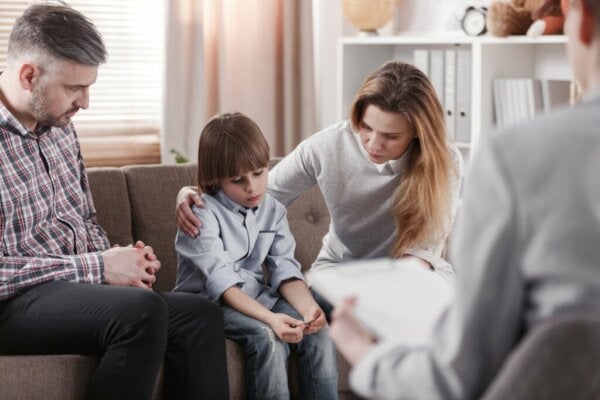 Today, the number of teens and children in therapy is on the rise. Attempts to explain the phenomenon and the dysfunctionality these children are struggling with point to social factors.

To a certain degree, family dynamics reflect the dynamics of the society in which they exist. Consequently, it’s hardly surprising that children today are struggling to make sense of an increasingly chaotic world. Therefore, what are the motivating factors behind their dysfunctional behavior? How can therapy help?

Chaos at the familial and social level

Elementary and middle schools are experiencing a growing level of aggression and violence among students, though it would be reductionist to attribute violence solely to the school environment.

It’s worth asking ourselves, however, why we expect schools to be free of violence when violence is a constant in every other social context. Traffic accidents, corruption, assault, robberies… Even soccer fields can become the backdrop for violence.

Work is often an unstable environment, rife with corruption and abuse. This has led to an economy defined by an ever-increasing gap between the rich and the poor, and a large population of disenfranchised, angry people. As if that weren’t enough, television is full of stupefying shows about wars between stars and people in show business.

If society is supposed to provide parameters for children about right and wrong but all they see is stupidity, corruption, and violence, how can we expect them to have a healthy outlook on the world?

Being in a constant state of crisis heightens problematic situations and conflicts with the family. That, in turn, injects a certain amount of neurosis into each family member. Dysfunctionality is no longer just laying a trap, it attacks.

Family units don’t exist in isolation. They’re immersed in the social context and inevitably reproduce the good and bad of the broader culture, to some degree.

Today’s familial climate is identical to the social one. People struggle to keep up with an overdemanding workload, fearing that they’ll be replaced if they fail.

At home, many couples barely talk to each other. They take care of the logistics of everyday life and child-rearing. Discussions revolve around bills and schedules but neglect deeper and personal questions and reflections. They don’t want to disrupt the delicate balance of their existence because they’re afraid it might lead to the chaos that comes from separation. This lifestyle produces a kind of helplessness that manifests itself in unhealthy responses that snowball into something huge and destructive.

This climate of permanent tension, added to fits of aggression, make for an environment that breeds anger, low self-esteem, conflicts, and helplessness in every family member.

Children and symptoms of dysfunctionality

Children get stuck in these behavioral patterns and parents become less tolerant. A demanding environment with little room for complaint or emotional expression leads to violent situations. This climate of marriage tension delves even deeper, however. When parents are constantly arguing, they start to involve their children in their vicious cycle of conflict.

Each child becomes part of the dispute, tending to side with one parent or the other. If the child takes the father’s side, they’ll be upset about anything their mother does to the father. At the same time, they’ll feel guilty for thinking bad things about their mom and vice-versa. This cycle of guilt and anger help maintain the tense, stressful family environment.

The communication of complexity quickly becomes complicated. The children’s feelings start to manifest themselves in other contexts as well. In other words, they start to behave badly in the other place they spend a lot of time at: school.

There, the child reproduces the unhealthy communication style they’ve learned at home but also releases pent up feelings of anxiety and stress. It’s enough to re-enact the violent behavior they’ve witnessed at home a few times to be labeled the “bully” at school. As soon as that happens, they’re likely to develop some kind of learning disability. One thing leads to another, and they become the target of name-calling and bullying by their classmates. That makes them feel left out and alone, which leads to more aggressive and violent behavior and reinforces the label.

Meanwhile, parents are getting notices from school about their child’s bad behavior and poor grades. They focus all their attention on that child and try different rewards and punishments to change their behavior. However, this strategy is usually fairly ineffective.

Now the child isn’t just problematic at school but also at home. There’s some wisdom in this, however. They’ve managed to release pent-up emotions and get their parents to pay attention to them. This is also a distraction from discussions that could lead to a separation. This exhausting cycle repeats itself over and over again. If you don’t stop it, it’ll lead to chaos, desperation, and even psychological disorders.

These days, going to therapy is much more socially acceptable than it used to be. Most people no longer associate it with being “crazy”. Instead, it’s generally seen as a healthy way to address psychological issues and increase well-being. Thus, today’s parents have the option of taking their children to therapy to help address their symptoms and resolve dysfunctionality.

Some therapists prefer to interview the parents first, and then do a series of individual sessions with the child. Starting at ages four and five, therapists use play therapy with their patients as a way to identify and decode the signs of conflict.

The symptoms that children show can express their parents’ relationship problems, intolerance to separation, a fragmented family, etc. The therapist’s job is to read the message that the symptom is transmitting. Family therapy is usually in order. It helps the therapist understand the family’s dynamic and the child’s resulting behavior.

Whatever the therapeutic strategy, it should give the child or teen the tools and resources they need to undo this dysfunctional process.

Therapists also have to inform parents about what’s happening and take responsibility for the root causes of the problem. If they continue to place all the blame on the child, they won’t resolve anything and the cycle will continue.

In conclusion, psychotherapy should be a space for reflection and learning. It’s also a way to organize and correct the detours and destabilizing factors of an individual’s well-being. For a child living with stress, anxiety, uncertainty, and instability, seeing them smile again is immensely rewarding.

New technologies come with new changes in how we communicate, and they can be wonderful since they allow us to…