Are Women Who Play Hard to Get More Attractive?

The myth of the woman who plays hard to get is highly widespread around the world. People say that men are only genuinely interested in women who don't make it easy to establish a relationship with them. But is it true? 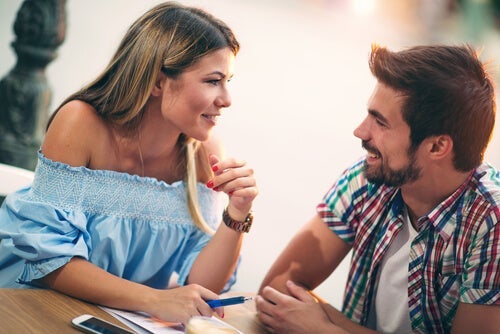 Women who play hard to get tend to create obstacles during the love conquest. Traditionally, people think that this attitude gets men more interested in women, so those who are “easy” don’t attract them as much. But is it true?

First, let’s point out that there are no fixed rules in love and relationships. You fall in love with someone without making a list of reasons why. However, during the flirting stage, it seems that there are patterns that people seem to repeat over and over again. And these patterns indicate that, in fact, women who play hard to get are more interesting to men, but not in all circumstances.

There’s research on this topic. Instead of looking for the perfect recipe to win over someone’s heart, experts have been exploring how humans respond to certain stimuli and how relationships grow. Let’s see what they have to say about it.

“The fantasy of a man is the best weapon of a woman.”

An old experiment about playing hard to get

In 1973, Dr. Elaine Walster from the University of Wisconsin conducted a somewhat rudimentary experiment. She wanted to know whether men were more interested in women who played hard to get or not.

What Walster and her collaborators did was hire a prostitute to allow them to identify the ins and outs of the subject in the most basic of situations. They asked the prostitute to randomly act reluctant with some of her clients and be more affectionate with others.

They discovered that, in those circumstances, men were less interested when the prostitute was more affectionate. In fact, they immediately lost interest.

They repeated the experiment with women from a dating agency and got similar results. The only difference was that, in this case, men were more interested in women who selectively played hard to get, meaning those that were reluctant to be with other men but very eager to be with them.

These studies show that this subtle difference modified the appeal of playing hard to get. In both contexts, women were available to get closer to some men. Therefore, it wasn’t logical for them to put obstacles in what they were looking for.

Nowadays, society believes that the harder something is to get, the more valuable it is. This fact has also been demonstrated in social psychology: people value more being part of a group that’s hard to get into. Some also say that men love challenges.

Neuroscience indicates that women also like challenges since it gives situations a touch of extra excitement.

Dr. Robert Weiss, vice-president of Elements Behavioral Health, points out that both men and women use elaborated strategies to challenge their potential partner during the flirting stage. However, said strategies are different in men and women.

Usually, women play hard to get by engaging in behaviors such as faking disinterest, responding to texts hours after they receive them, and simply being unavailable from time to time. Men, on the other hand, prefer to make women feel jealous.

Women who play hard to get

If a person seems unavailable, it doesn’t always mean that they’re trying to flirt. Some people just can’t avoid making things harder during that initial flirting stage. They act like that because they’re insecure and fear getting hurt. Usually, the other person notices this attitude and tries to stay away.

Furthermore, a research study published by the Journal of Experimental Psychology indicated that the hard to get paradigm only works when the person is already highly interested in that woman. When she’s hard to get close to, it increases interest but doesn’t really create it.

However, sometimes there’s no prior interest. In those cases, playing hard to get tends to demotivate the other person. No one wants to put extra effort into something they’re not entirely sure they want. In these cases, getting close and being available ends up being the spark that lights the fire.

Three Kinds of Men You Should Never Date
Neither men nor women are perfect. We are actually quite far from it. We are all full of defects and we go through times when we are really difficult Read more »
Link copied!
Interesting Articles
Romantic Relationships
Russ Harris on Making Relationships Work

Russ Harris is part of a group of psychotherapists who subscribes to the acceptance and commitment therapy (ACT) approach. British…