What's laughter? How's comedy born? And, above all, what's happiness and how does one achieve it? Annie Hall is a comedy of characters whose narrative and cinematographic ingenuity make it one of the best comedies in film history. Laughter and psychology go hand in hand in this movie by Woody Allen. 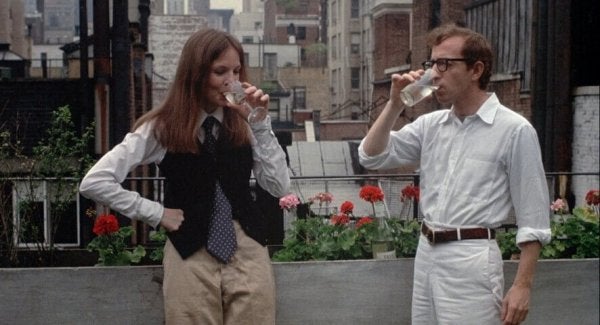 Annie Hall premiered in 1977. It was a time when technology didn’t prevail. Despite the passage of time, it seems that Woody Allen’s classic is still relevant. This is because its theme fits perfectly into this era. And you can still appreciate the situations and their ingenious dialogues and monologues.

Thus, Annie Hall appeals directly to the viewers. Allen breaks into their lives as he looks at the camera and makes them participants. It plays with them by presenting digressions, comings, and goings. And it even shows subtitles to express the thoughts of the characters. Finally, there’s also an animated fragment parodying Snow White and the Seven Dwarfs.

In addition to being a cinematic delight, with a really interesting and innovative aesthetic, Annie Hall gives the comedy a very real psychological component that interprets the problems of contemporary men very well. The fears and neurosis that are still present today, even though they belong to a rather different era.

The film received several Oscar awards. In fact, the movie industry recognized it as one of the best scripts in film history and the best romantic comedy. “Annie Hall is a must,” they said. It’s a “romantic comedy” and “it’s contemporary life”. Because it’s totally ingenious, spontaneous and thoughtful, it’s a delight for your senses. However, it’s also susceptible to analysis and study from areas such as philosophy and psychology.

Perhaps before asking who she is, you should ask ourselves how she came to be. At first, the love story between Alvy Singer and Annie Hall was part of another script. Later, it continued to evolve towards anhedonia. Anhedonia is nothing other than the inability to feel pleasure, resulting in a feeling of permanent dissatisfaction. And this is precisely what Alvy Singer’s character is all about.

This original idea seemed rather incoherent. In fact, it was more similar to an internal monologue by Allen than the comedy you know today. Subsequently, it took shape and the result is exceptional. Annie Hall is a character comedy. It’s a comedy that looks at reality and normalizes visits to the psychologist.

Diane Keaton and her character

Ok, so who’s Annie Hall? Well, she’s none other than Diane Keaton herself. And it’s because Allen didn’t imagine fictional characters nor did he look very far when drawing his unique protagonists. Instead, he was inspired by himself and his muse, Diane Keaton.

Keaton’s birth name was Hall. Also, her family knew her as Annie. Beyond the name, there are other similarities between characters and performers. For instance, they both worked as singers in nightclubs. In addition, they tried to see the film as a reflection of the sentimental relationship that Allen and Keaton maintained. And, also, of their subsequent breakup that, in turn, invites you to reflect on contemporary relationships.

Annie Hall not only created a trend in the cinematographic field but also in the world of fashion. Keaton used to wear men’s clothing such as wide clothes, vests, and ties. This was a contrast to the typical clothes women wore in the world of cinema. Her look created a trend, broke molds, established a new milestone in fashion, and gave the character a great personality. The result? A comedy with its own name and identity.

Can psychology and laughter go hand in hand? There’s been much talk of laughter throughout history. Even though in reality the comic used to be associated with the “masses”, while the serious was part of the “upper-class” culture.

Already in antiquity, you can see how laughter was dealt with by various authors such as Democritus, Aristophanes, or Hippocrates. Authors such as Cicero or Quintiliano deal with the rhetoric of laughter. In fact, there are rhetorical manuals that talk about jokes or laughter genre for keeping the attention of the viewers.

Laughter was caused by clumsiness and was “low”, so it isn’t surprising for it to be frequently associated with the figure of the fool or the madman. At first, there wasn’t much distinction between the two. But the distinction came, especially, with Cervantes and Don Quixote, a work in which the two well-differentiated figures appear. The fool was Sancho, and the crazy one, Don Quixote.

Humanism highlights the figure of Laurent Joubert who brings this issue closer to psychology with his Treaty on Laughter. As of this moment, there are several authors who theorized on the issue — such as Freud, Bergson, or Koestler.

Bergson gathered a series of articles in a work entitled Laughter. In it, he concluded that laughter is due to the clash between two planes. Koestler, meanwhile, goes one step further and says that laughter is produced by “bisociation”, which stands for “double association”.

There are certain studies that deepen laughter from a psychological point of view. In the case of Annie Hall, there’s an association of contemporary psychological problems with laughable situations. They take everyday situations to the extreme and use countless narrative resources. Also, they break the plot to introduce characters known to the public of the time, such as philosopher Marshall McLuhan. There’s also an anagnorisis with the character of Alvy Singer.

Alvy Singer is a comedian with many psychological problems. He has a shrink and excessively questions and analyzes everything. Anagnorisis provides a character with elements that produce recognition. Thus, in the case of Alvy Singer, there’s a feeling that they’re not only psychoanalyzing Allen but the viewers as well.

Laughing at yourself, at your phobias, at the problems of a world in which you lack very little and yet you’re totally unhappy. Allen performs an exceptional cinematic and humorous exercise. He gives you one of the best scripts in the history of cinema where psychology and laughter merge.

Alvy Singer has been looking for happiness all his life, but can’t find it anywhere. Not even his love for Annie Hall, where he’ll only find imperfections. He’s the Pygmalion of his era, trying to mold Annie to be his perfect woman.

In contemporary times, people associate happiness with possession; whether it’s about having a relationship, social status, or material things. In Annie Hall, you see how such relationships aren’t so perfect at times; hoy they’re irrational and can drive you to insanity.

In his tireless struggle to understand what happiness is and how to achieve it, Alvy asks a couple who are seemingly very happy what the key to their happiness is. The couple is comprised of two people who are, in fact, totally happy. However, they don’t question anything at all. Also, they don’t think and are completely empty and superficial. Thus, Allen gives you one of his keys to happiness: don’t overthink and remain ignorant.

There’s no place for thought in a world as frantic as ours. Alvy represents the neurotic urbanite with a totally pessimistic vision that parodies regular people. Annie Hall invites you to analyze, but also to laugh. In other words, to take life less seriously or else, be just like Alvy Singer.

Neurotic and Psychotic Defense Mechanisms
Defense mechanisms are automatic psychological processes. They protect you from anxiety and the perception of internal/external dangers or stressors. Read more »
Link copied!
Interesting Articles
Cinema, Television, and Psychology
This Sweet Film Will Teach You A Lesson About Love And Relationships