"And the People Stayed Home": A Poem to Make Us Think

In this very interesting article, discover the amazing poem "And the people stayed home". Read on! 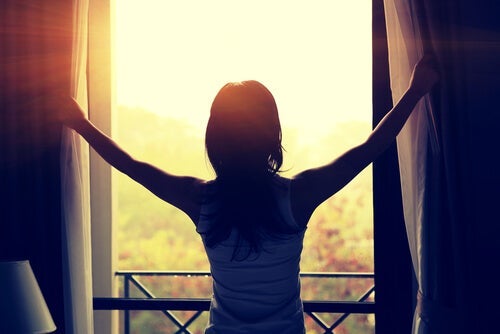 “And the people stayed home” is the name of a poem that has circulated over the last few weeks on several social networks. It was promoted by stating that it was written in 1800, during one of the many pandemics that have plagued mankind.

As the days went by, it became clear that this isn’t true. The author of “And the people stayed home” is Kitty O’Meara. She’s a woman who worked as a teacher and as a spiritual assistant in hospices and hospitals in the United States. She was simply inspired by the pandemic that has us on the ropes.

The text captured many people’s attention. Thus, it didn’t take long for it to go viral. One of the elements that makes this poem so special is the echo of hope in its lines.

“And the people stayed home” reminds us that, although darkness surrounds us, we’ll eventually come out into the light.

“And the people stayed home…”

The poem begins with a phrase that, for many of us, has meant a radical change from our old way of life: “And the people stayed at home”. Suddenly, the present and the future were in question. We were forced to confine ourselves, change our plans, and cut off our relationships. We were forced to change the ideas we had about the future.

Then came the confusion. Most of us don’t live in big houses with huge gardens and sea views. Thus, we had to learn how to live and cope in small and sometimes inadequate spaces. Spaces where individual and group conflicts also exist.

Many of us have chosen the activities indicated in the poem: “And the people… read, and listened, and rested, and exercised, and made art, and played games…”. This confinement has mainly been a question of finding other ways to make the most of our time and limit uncertainty.

In the best cases, people have echoed the following lines of the poem: “(They) learned new ways of being, and were still. And listened more deeply. Some meditated, some prayed, some danced. Some met their shadows”. When we truly find what’s deep within us, we surprise ourselves and listen even more intently.

“And the people began to think differently”

The second part of the poem concerns our immediate future. It speaks of what we hope will happen. An experience as intense as the one the whole world is going through should mean that we’ll learn some lessons. Lessons about who we are, what we do, and how we relate to nature.

In the poem, that inner change leads to something new: “And the people healed”. In this case, healing isn’t just about overcoming physical illnesses but about purifying areas of our minds and spirits that we may not have been aware of.

Issues such as the value of life and solidarity. Or living in harmony with the planet we all inhabit. Perhaps it’ll also speak to us about the leaders we choose and the purposes we set for ourselves, based on ambitions that sometimes have no limits. To heal is to recover what’s essential and makes us truly human.

“…they created new ways to live and heal the Earth”

If man is healed, thanks to universal solidarity and collective commitment, then the world will also heal. The poem continues: “And in the absence of people living in ignorant, dangerous, mindless, and heartless ways, the Earth began to heal”. Like a chain effect, it starts inside us, in confinement, and then spreads outwardly and influences those around us.

What the text implies is that we’re facing extraordinary times that require us to change. We need to rise above what we’ve been and what we’ve done. We need to learn to think about ourselves differently. This is the only way to undo what’s been done and close Pandora’s box and the evil it poured out on this planet.

In its final lines, the poem gives us a scenario full of hope. It says: “And when the danger passed, and the people joined together again, they grieved their losses, and made new choices, and dreamed new images, and created new ways to live, and heal the Earth fully, as they had been healed”.

This beautiful poem begins by saying “And the people stayed home”, and it ends by pointing out that the result would be to “…heal the Earth fully, as they had been healed”.

Hopefully, this poem will be more than just a beautiful text. Hopefully, it’ll be a prophecy of what’s to come if we do what we’ve been told to do. May all of this result in what so many of us have wished for: a better world.

Love is about Action, Not Poetry
Love is about action. But, it's an abstract concept and difficult to define. In fact, people from all walks of life have tried to pin it down and label it. Read more »
Link copied!
Interesting Articles
Literature and Psychology
Long Live The Antiprincesses!