A Nahuatl Legend - The Myth of the Sacred Land

A Nahuatl legend, The Myth of the Sacred Land, presents an allegory of the concept of living life to the fullest. In order for it to be possible, people must meet a series of circumstances to guarantee its emergence and preservation. 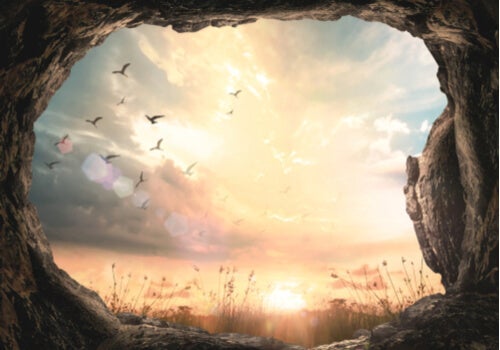 The myth of the sacred land is a Nahuatl legend that tells about the beginning of the world many, many years ago. There was once a noble courageous pregnant woman. She wanted to be a mother so badly because she loved life in spite of inhabiting the desert, a place with little water and food.

The Myth of the Sacred Land tells that, when the moon was full and bright, the woman gave birth to a beautiful child. It was a healthy boy who cried a lot. The mother tried hard to feed him but he didn’t want to breastfeed. Thus, he was hungry and kept crying.

The woman tried to comfort the baby but the boy didn’t calm down. Upon careful observation, the woman noticed that the boy had a water well on his belly. Fearing he might be a victim of witchcraft, she asked a friend to go fetch a healer who could help her.

A Nahuatl legend – a strange kind of evil

The mother’s friend walked the entire day until she reached the healer’s hut. She told her a boy was born and wouldn’t stop crying. She also told her about the strange markings on his belly and that his mother feared it a spell. The medicine woman mulled over it for a while and then collected some things and asked the woman to take her to the child.

The two women were exhausted when they arrived. They heard the child’s cry for afar, he hadn’t stopped at all. The medicine woman approached him and carefully examined his belly. She then consulted with the spirits, who told her the boy wouldn’t calm down until they opened a well in the location of the drawing. The woman communicated it to the mother and the rest of her family.

The Myth of the Sacred Land tells that everyone went about opening the well on the boy’s belly the next day. They didn’t know how to do it but the medicine woman told them how. Thus, she guided them until, a few days later, the water began to flow. The next step was to burn an incense stick next to the child. Then, at the end of the ritual, they noticed the belly no longer had a drawing.

A surprise in the Myth of the Sacred Land

The healer spent the night in the village and the boy slept peacefully until dawn. However, the next morning, he began to cry again. The mother rushed to check on him and saw the drawings of small fruits and vegetables on his arms. So, she immediately called the healer, who carefully evaluated them.

After carefully examining the boy, the healer informed them the next step would be to collect some soil and plant fruits and vegetables on that spot. The child would continue to cry otherwise, and perhaps even become ill and die.

Everyone in the village was ready to follow the directions. The boy calmed down as they prepared the soil. In fact, he hardly cried after they started planting. The Myth of the Sacred Land tells that the healer left at this point. She promised to return in a few months to see how things were going.

An important lesson in this Nahuatl legend

Several months went by and the healer kept her promise. She once again collected her things to travel to the village. When she arrived there, she saw how it was now a beautiful place full of fruit trees and beautiful crops. She was taken aback, of course. However, she heard the boy cry as she got closer.

When she finally talked to the mother, the latter told her the boy was fine for a while. However, he had begun to cry again a few days later and they didn’t know why. She had examined him and found no other markings on his body. Then, the medicine woman also examined him thoroughly and found nothing. Thus, she conferred with the spirits again. The next day, she publicly revealed what they communicated to her.

According to the Nahuatl legend, the healer addressed the villagers and told them they must make a pact with Mother Earth. The child had come into the world to teach them you can’t bring a new life into the world unless you’ve created the proper conditions for their proper development and well-being. Now everyone had to promise they would always ensure there are water and fertile land that can make life possible. Thus, they followed the advice and the boy grew up healthy and happy.

The Origin of the Three Kings
Discover the origins of these Biblical Magi, including where the tradition of Three Kings Day began and how they've influenced art through the centuries. Read more »
Link copied!
Interesting Articles
Stories and Reflections
The Benefits of Reading: New Worlds to Be Discovered