7 Songs that Improve Your Life, According to Science 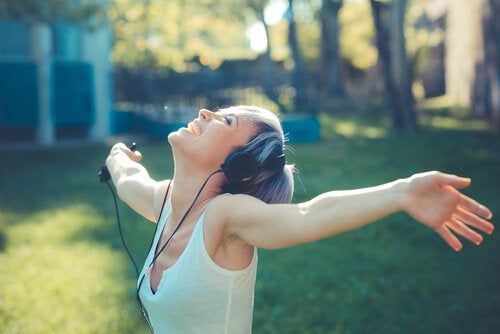 Well, when you think nobody could stop you because you’re doing so good, you’re actually partly right. Now, what can we do to get to that state of optimism?

Listen to some of the songs below!

It’s obvious that a life without music would be a seriously sad one. Rhythmic sound has been with us from the beginning of our history as a species.

From banging a pair of bones over tightly stretched skin, to our modern-day digital chords, all it takes is some music to get excited or sad or start dancing like maniacs.

A fascinating scientific study about songs that improve your life

The author of the study about a set of songs that can improve your live is Jacob Jolij. This neuroscientist from the University of Groningen in the Netherlands, says that he has found an equation capable of predicting the effect of different songs on our emotional state.

It’s interesting that Jolij focused on a mathematical formula to establish how music affects our emotions. It’s true that solving a complex algebra problem can instill a great sense of joy in an individual. But can you imagine if science could talk about something as exciting and not quantitative as music?

According to Jacob Jolij, musical compositions with tempos higher or equal to 150 beats are capable of giving the human brain with a lot of energy.

Thinking of songs with a fast tempo is relatively easy, since there are many of them. But would you like to know what songs Jolij recommends? He focused on the most famous songs with a good rhythm…

Songs that will improve your life, according to Jacob Jolij

Let’s take a look at the songs that fit into Jacob Jolij’s mathematical formula. You’ll notice that most of them are very upbeat and appealing. And first place goes to, like how we started this article, Queen.

Don’t stop me now, by Queen

Did you think that you singing along to this song like there were no tomorrow was mere coincidence? Well, it’s not. Actually, it’s pure mathematics.

The tempo of one of the most renowned songs by Queen is the first recommendation Jacob Jolij makes for having a fulfilling life.

“Don’t stop me now
I’m having such a good time
I’m having a ball”
–Queen, Don’t Stop me Now-

We’re sticking with queens again. From the celebrated group headed by Freddy Mercury, we’re passing over to the quintessential ABBA. The Swedish quartet gave the world songs that are true hymns to joy and life. But, according to math, none of them compare to Dancing Queen.

Good Vibrations, by The Beach Boys

Another group that always brings a good time and love. Even their sad songs praise life and passion. It’s not surprising, then, that Jolij’s science recommends their hit Good Vibrations.

Next, our Dutch neuroscientist recommends another classic hymn, Uptown Girl by Billie Joel. What else can we say? We’ve all danced, hummed along or at least smiled to this song.

Eye of the Tiger, by Survivor

Without a doubt, Eye of the Tiger, immortalized on the Rocky soundtrack, helped the famous boxer give his all and overcome. It turns out that it’s uplifting outside the film as well. It lifts our spirits and improves our mood anytime we hear it.

“So many times it happens too fast
You change your passion for glory
Don’t lose your grip on the dreams of the past
You must fight just to keep them alive”
–Survivor, Eye of the Tiger-

I’m a Believer, by The Monkeys

The Monkeys, another famous group, gave us I’m a Believer, number six on this list. Are you lacking strength to face the day? You can be sure that this song will cheer you up. It’s just science.

Girls Just Want to Have Fun, by Cyndi Lauper

And we’ll wrap up this list of songs science says will improve your life with another classic, Girls Just Want to Have Fun, by the great, Cyndi Lauper. Every time we hear this song, we want to get up and dance around like crazy.

In addition to the songs above, Jolij’s study recommends other songs.

And that’s all it takes. Do you want to put a smile on your face and feel better? What are you waiting for? Turn on the music and fill your playlist with these hits.

If you have a song that really gets you moving, share it with us in the comments!

Music Can Make It Easier to Get Out of Bed
We don't know when it was invented, but we do know that thousands of years ago, philosophers like Plato said that "music is for the soul what gymnastics Read more »
Link copied!
Interesting Articles
Culture
12 Quotes by Renowned Linguist, Noam Chomsky

Culture
The Boomerang Generation: The Kids Who Move in with Their Parents

One of the fastest growing trends in the Western world is the boomerang generation. This generation represents kids who move back…

Sleep paralysis is an experience that tends to produce a lot of anxiety. It occurs primarily when falling asleep or…