Why Your Brain Always Looks for Someone to Blame

Some people are incapable of accepting their own mistakes. Thus, instead of taking responsibility for their actions, they project the blame onto others. This reaction is related to a strategy the brain has to avoid facing reality and to look for someone to blame. 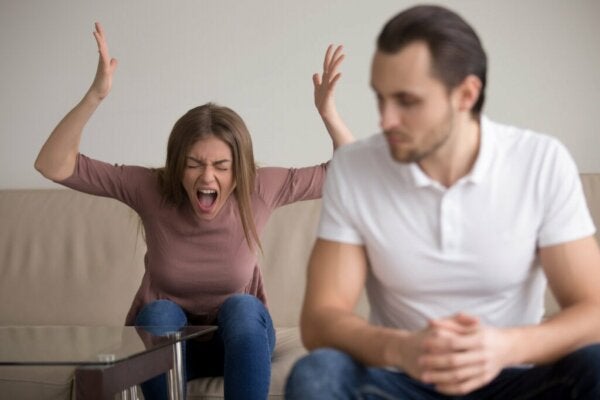 Although you may not realize it, your brain looks for someone to blame for the things that happen to you. It does it for important things, but also for rather trivial and inconsequential ones.

Looking for someone to blame for your sadness, bad luck, or setbacks is a powerful defense mechanism, as you can shift onto other people’s shoulders aspects that sometimes concern you.

If your partner leaves you suddenly, your mind may whisper to you that there’s probably a third party. It isn’t always easy to accept that, sometimes, love reaches an endpoint, and fades away. And if you fail an exam, then, it’s the teacher’s fault, as they have it in for you. Looking for a scapegoat is something that many people do almost constantly.

The blame game can be compared to turning on a fan and randomly apportioning responsibility for the things that happen to you. Some people do it more overtly. However, others hold back much more and are able to restrain themselves before starting to point fingers.

This phenomenon is actually more common than you’d think, and it all boils down to one thing: emotional mismanagement.

When things happen in the opposite way to what you were hoping for, or expected, then you need to make sense of what happened. And this sometimes happens by blaming other people. Let’s take a closer look at this.

Why does your brain look for someone to blame for what happens to you?

Imagine you’re walking down the street, and, suddenly, you slip on some fallen leaves. As you get back on your feet, annoyed at having attracted attention, perhaps angry at having made a fool of yourself, you start to tell yourself that it’s the fault of the local government. They should keep the pavement clean and pick up everything that’s on the ground.

Somehow, your mind is governed by that idea of cause and effect. If something happens, then there’s a reason behind it. Moreover, your brain will tell you that the cause of that misfortune is someone else, and never you. By doing so, you’ll release the negative emotions, the anger you felt because of that fall, and the embarrassment it caused you.

Why does the brain play the blame game?

The brain looks for someone to blame for the things that happen to you, and this happens a lot more than you’d think. So much so, in fact, that the mass media knows all about it and uses it distinctly to its advantage.

In a study conducted at the University of Amsterdam, researchers found that the most sensationalist newspapers usually have a common strategy. You may have noticed that they’re always looking for someone to blame for everything that happens.

That culprit is almost always important people, celebrities, or a particular political party. So, as you can see, it’s very easy to manipulate this process. However, it’s also something that we all use, almost unconsciously, for the following reasons:

All negative things bother us

Many people have the emotional management skills of a three-year-old child. They’re intolerant to frustration, try to escape from any form of responsibility, and are allergic to negative emotions.

When they make a mistake, or when something happens that they can’t control, they channel their rage, looking for culprits while repeating to themselves “It wasn’t me“.

This low tolerance to error, and to those uncontrollable and simply unfortunate aspects of human life, subject them to a state of constant anger. As a result, this can create very problematic situations, both for themselves and for those around them.

What can you do when your brain looks for someone to blame for what happens to you?

When your brain looks for someone to blame for what happens to you, you must be fully aware of what it’s doing in your mind. The human mind is made up of multiple defense mechanisms that most people aren’t aware of.

Because of this, people let themselves get carried away by irrational thoughts, and by ideas such as “This happened to me for a reason and someone’s to blame“.

In short, before looking for a scapegoat, you should take time to reflect. Before you look to blame other people, even if it’s at the highest levels, society in general or politicians, try to think about your responsibility. Try to understand to what extent you may be to blame.

Before blaming anyone you can think of, focus on yourself and look for solutions to what’s happening to you. This is the only winning strategy in life to make you a more responsible person. And, as a bonus, you’ll improve your own well-being!

Why Do We Sometimes Blame the Victim?
We believe we're safe as long as we "do the right thing". This belief makes us unconsciously blame the victim, even if we're the victim ourselves. Read more »
Link copied!
Interesting Articles
Brain
The Tip of The Tongue Phenomenon