Biophilia is related to the satisfaction human beings experience when they come into contact with other living beings and with nature in general. 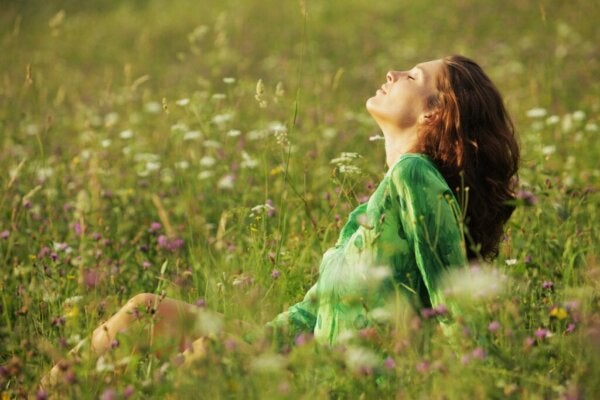 Biophilia is humans’ innate tendency to want to get close to nature and feel in tune with it. The first person to use this term was the philosopher and psychoanalyst Erich Fromm in 1973. Later, Edward Osborne Wilson published a book called Biophilia.

From an etymological point of view, biophilia is a word composed of two Latin roots: bio, which means ‘life’; and philios, which translates as “natural inclination, affection or friendship”. Wilson defined it as the ability to marvel at the life around us.

An important aspect of what we’ve mentioned so far is that biophilia is deeply rooted inside us. We could say that it’s “innate” to humans. We aren’t talking about environmentalists or green activists, but, rather, about a tendency that we’re born with to love nature.

The theory of biophilia, expounded mainly by Edward Wilson, points out that humans were closely related to nature. They experienced a natural need to be in contact with other living beings and this became congenital.

From this perspective, getting in contact with other living beings is as important as socializing with other humans. That’s why people have a special feeling of balance and peace when they go to a forest, the coast, or spend time with their pets.

This tendency is present in human genes. You could say that human beings have a type of “coding” that makes them feel attraction, curiosity, and interest towards everything that has life. That’s why Wilson says that man shouldn’t only be defined as a “social animal” but as a “social and natural animal”.

Experts conducted a study in the Netherlands with more than 300,000 adults and children. The purpose was to identify the impact of contact with nature on daily life. The results of the study were published in the Journal of Epidemiology and Community Health.

The study concluded that people who live near green areas have fewer anxiety and depression problems than those who live in cities. In fact, it found evidence of a lower risk rate for at least 15 diseases, including heart disease, diabetes, muscle pain, migraines, and asthma.

We’d also like to highlight another study titled “The health benefits of gardens in hospitals“, authored by psychologist Roger Ulrich. He showed that patients who have undergone surgery recover more quickly and need fewer painkillers if they can see a green landscape from their window.

The same report also suggested that looking at vegetation has a tremendous impact on our health. It can reduce heart rate, blood pressure, and sympathetic nervous system alterations.

Many large cities have done nothing but steal space from nature in order to build large concrete masses, gray streets, and dark buildings. In many of these cities, the only hint of nature is in small green areas and parks. In addition, they aren’t always close to housing complexes.

Cities establish a separation between humans and their natural surroundings. Thus, contact with nature has been reduced to our experiences as tourists, at most, and often isn’t part of everyday life.

Several cities have become aware of this, and are creating new models and styles of urbanism where nature is, once again, the central part.

The country par excellence in this new model is Singapore. In many of their cities, they’ve built networks with an uninterrupted flow between parks and green areas. Many birds, insects, and other animals have gradually started to populate these spaces.

Biophilia was at the forefront of ancestral cultures, and it’s now also present in several non-Western cultures. For most of the surviving indigenous peoples, contact with nature is unquestionable. They don’t need theories to keep this love of nature present and alive.

Beyond conservationism or ecological movements, perhaps the best thing to do is to look inside yourself. There, perhaps hidden away, you’ll find that “social and natural animal” that isn’t entirely comfortable with being prevented from having fluid contact with other living beings. Perhaps it’s time to begin to change that paradigm.

Does Nature Relieve Your Stress?
What is it that makes us want to spend time in the great outdoors? Is it possible that nature helps relieve your stress? Read on! Read more »

If you've ever thought about the meaning of excellence, there's a crucial detail you should always remember: excellence doesn't mean…

Wellness
I Want to Experience Everything

If we really think about it, life is so short... So why don't we try to experience everything it has…

Wellness
The Truth Satisfies the Soul

Telling a lie or not saying the truth in order to not hurt someone or to hide a reality is something that we have all done at some point in our lives.…

Nowadays, we know that people can be emotionally intelligent. There are many types of intelligence: linguistic, musical, logical-mathematical, special, corporal,…