What is Agoraphobia? Symptoms and Treatment 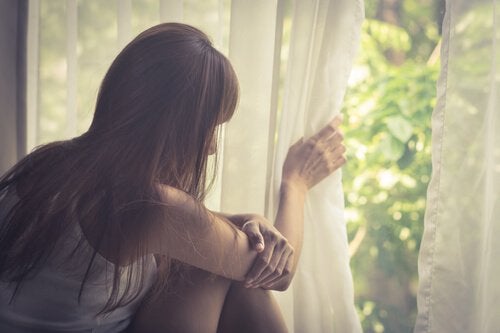 Agoraphobia is a psychological disorder closely associated with anxiety.  Agoraphobia can exist without a prior history of anxiety disorder. However, these two psychopathologies often go hand-in-hand.

Let’s define both concepts and get a firm grasp on the conceptual framework in order to fully understand agoraphobia.

A panic or anxiety attack involves the sudden, isolated, and temporary onset of fear or intense unease. It is usually accompanied by certain characteristic symptoms.

The relationship between agoraphobia and panic attacks

Suppose someone experiences a sudden onset of all of these physiological symptoms. If their thought pattern takes on a catastrophic tone, they will feel even more fear. So, these initial symptoms of anxiety intensify.

The person will interpret their feelings in such a way that he truly believes he is going to die or lose control of the situation. That, in turn, makes the symptoms worse.

Thus begins a vicious cycle that worsens anxiety to a point that the person has to ask for help, or he worries the people around him so much that they will get help for him.

Some other typical behavior for this type of anxiety has to do with avoiding places that are possible sources of anxiety. If they are already in a place that causes anxiety, they will escape or take some kind of tranquilizer.

What’s the problem with safety behaviors? Well, they only work in the short-term.

In other words, if the person takes an anti-anxiety medication, drinks some water, or leaves the situation when symptoms begin, the unpleasant feelings with subside. This escape is negative reinforcement and will cause the person to act the same way in the future.

In fact, they will limit themselves more and more every time. Escaping means they never learn that nothing terrible will actually happen. They won’t die nor will they lose control or go crazy.

Escaping doesn’t let them realize that. The only thing it does is reinforce the person’s behavior. They believe that because they escaped or used their safety behaviors, they are safe and sound.

The truth is, the patient’s interpretation is biased. They mistakenly believe that their symptoms can kill them because they seem like a heart attack or psychosis. It’s important to understand that although they seem similar, they aren’t the same.

Anxiety has its own symptoms, which often develop after a lifetime of adversity. Patients with anxiety are like pressure cookers that end up exploding. This sends the person a message that it’s time to stop and reclaim their balance and inner peace.

When does agoraphobia happen?

Agoraphobia happens when a person has had repeated anxiety attacks. They develop a terrible fear that the attacks will happen again in certain situations. The idea that they will experience another attack and it will be difficult to get help motivates the fear.

The person, in this case, has something we call “fear of fear”. Metaphorically, we could think of a child that is afraid of their own shadow and tries to get away from it.

For example, if their panic attacks happened in a supermarket, over time they will also associate places like the movie theater, malls, or even public transportation with panic attacks.

This limitation can lead to symptoms of depression. Why? The person stops getting any kind of positive reinforcement from their surroundings. Every time they feel incapable, their self-esteem drops and their desperation mounts.

What is the underlying cause?

There are some factors that try to explain the answer to this question, though they don’t all have to present to mean agoraphobia (with or without an anxiety attack). Some authors discuss the following as factors that lead to the disorder:

Focused attention on their own sensations

Some people have a special sensitivity to detect bodily changes. Consciously or subconsciously, they are always aware of their bodily reactions and fluctuations. They use these changes as a reference to anticipate any of the dangers we previously mentioned.

When people with this sensitivity have any kind of physical symptom, they will notice it more quickly. That, in turn, will add to their anxiety.

This theory has a lot of empirical evidence to support it. In a study in 1980 by Ehlers, Margraf, Roth, and others, they found that patients with anxiety disorder significantly increased their anxiety when they felt their heart rate rise.

Hyperventilation causes compensation in respiratory alkalosis (with an almost normal blood pH). That means that carbon dioxide and bicarbonate levels in the blood are lower than that of control patients.

These levels make people more prone to anxiety attacks. That, in turn, makes them more likely to suffer from agoraphobia.

Separation anxiety makes the person more vulnerable to turn to avoidance behavior during panic attacks. This might lead them to develop agoraphobia.

There are some environmental factors that contribute to agoraphobia as well. Stressful events like losing a job, a breakup, or losing a loved one can also be the impetus for an attack.

What is the treatment for agoraphobia?

Treating agoraphobia is treating the fear of our own fear. That manifests itself in the symptoms we listed above.  The treatment has to help the patient overcome their own fear and live a normal life. This general goal encompasses other, more specific goals that the therapist will progressively lay out for the patient.

Psycho-education consists of explaining the disorder to the patient. The psychologist explains common causes of the disorder, outcomes, and treatment.

Once the patient knows his disorder and knows the treatment options, therapy can begin. We’re going to focus on cognitive behavioral therapy because it has the most empirical evidence behind it. This type of treatment has two well-differentiated parts: cognitive and behavioral.

The goal is for the patient to modify his erroneous beliefs and ideas about his symptoms and the situations he is coping with.

The other goal is for the patient to be able to manage said situations without any safety behaviors. The patient should be able to reduce his anxiety and modify his distorted thought patterns.

Cognitive restructuring is the technique of choice when working with thoughts. It consists of asking the patient questions targeted at taking apart negative and irrational thoughts that uphold the disorder.

This way, the patient is forced to change those ideas and replace them with thoughts that more closely reflect reality.

Another cognitive technique that we can use are behavioral experiments. They are cognitive in nature because the goal is to dismantle the patient’s thoughts. The patient and his therapist agree on a situation that he will have to go through in real life.

The patient writes down everything he thinks could happen, and then does the experiment. Afterwards, he reflects on if what really happened matches what he thought would happen.

Cognitive techniques are essential to help someone with agoraphobia more calmly handle their problems. But behavioral therapy, practiced over time, will actually get rid of the disorder. Behavioral techniques in the context of agoraphobia means exposure to real-life situations.

First, the patient and his therapist should come up with a hierarchy of anxiety-producing situations.  Starting with the one that produces the least amount anxiety and ending with the worst.

Then, they evaluate them using the Subjective Units of Distress Scale (SUDS) that goes from 0 to 10. Some situations will include safety behaviors, but those should be progressively eliminated.

The end goal is for the patient to be able to deal with the situations on their list. In other words, they will face them like any other person that doesn’t have the disorder.

The situation is crossed off the list when the patient notices that his anxiety diminishes significantly and he can cope on his own. Only then will he move on to the next situation, never before. Otherwise, it could provoke sensitivity to the situation instead of familiarity. And that is obviously not the goal.

If the exposure is successful, the patient has managed to overcome the situation. His anxiety will fall to normal levels. In essence, he will learn and internalize the idea that nothing as terrible as he imagined occurred.

In broad strokes, this is the general treatment for agoraphobia. Depending on the case, we can also use other strategies. For example, things like social skills training, addressing depression (if there is any), getting rid of secondary gains.

In addition psychologists might recommend medication along with psychotherapy. This can be helpful for patients who have suffered for a long time.

Barlow, D.H (1988). Anxiety and its disorders: The nature and treatment of anxiety and panic. Nueva York: Guilford Press

How to Control the Symptoms of Panic Attacks
Panic attacks can happen without any warning. Here, we will analyze what the symptoms of panic attacks are and how we can control them. Read more »

Barlow, D.H (1988). Anxiety an its disorders: The nature and treatment of anxiety and panic. Nueva York: Guilford Press

Link copied!
Interesting Articles
Psychology
It's Hard to Be A Child in a World Full of Tired Adults

Psychology
The Bond Between Children and Pets

One of the most famous and incredible French writers, Anatole France, once said that "until one has loved an animal a…