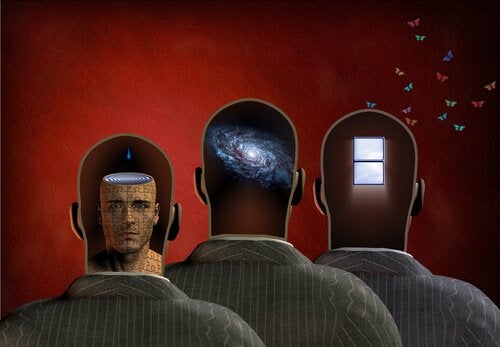 The triune brain is a concept that neuroscientist Paul MacLean developed to refer to the three parts of the brain in human beings. These parts develop in different stages of the evolutionary cycle, which is why people say they’re created from the bottom up. This means that the oldest, most primitive part of the brain develops in the uterus. The emotional brain develops within the first 6 years of life. Hence, the prefrontal cortex develops last.

Advanced physics and technology have made neuroscience one of the most popular fields of research. Neuroscience has allowed us to better understand how the triune brain works (three types of brains in one). Now we’ll describe the characteristics of each part of the triune brain.

The reptilian brain is also known as the ancient animal brain or the reptilian complex. It’s located in the brain stem, right above the place where the spinal cord accesses the cranium. This is the most primitive part of human beings. It starts developing in the uterus, so it has an influence on everything newborns do (breathing, eating, sleeping, waking up, crying, urinating, defecating).

The brain stem, along with the hypothalamus, controls the organism’s energy levels. This is called “homeostasis”. This term refers to the maintenance of internal balance. The functions that the reptilian brain controls are fundamental. However, we often disregard their importance when we think of the most advanced functions of our mind such as abstract thinking.

Many psychological problems are related to difficulties in the basic functions that the reptilian brain maintains. For example, for any trauma treatment, the specialist must take into account if the entire body has suffered an imbalance.

Some authors also consider the emotional brain a mix of the reptilian brain and the limbic system. This is the center of our emotions and our danger monitor.

Consequently, intense emotions activate the limbic system, specifically the amygdala. The amygdala is in charge of notifying us of possible dangers (as it’s the center of fear) and setting different responses in motion:

Through his studies with animals, Gray demonstrated that the lower the serotonin level, the greater the hyperactivity to stressful stimuli (and vice versa). For example, in male monkeys, he observed how the position in the dominance hierarchy influenced serotonin levels.

Certain people who have experienced traumatic events register the threat. However, their conscious mind continues as if nothing had ever happened. Although the mind can learn to ignore emotional messages from the brain, the body’s warning signals don’t. This means that the emotional brain will continue to function regardless.

In addition, both parts of the triune brain (reptilian and emotional) are responsible for recording experiences and also managing our physiology and identification (comfort, security, threats, hunger, fatigue, desire, pleasure, pain).

This is the youngest part of the triune brain. It’s also known as the neocortex and it’s the one that differentiates us the most from other animals. This is where the prefrontal cortex is located, which is the one in charge of planning, anticipating, perceiving time and context, inhibiting inadequate actions, empathic comprehension, etc.

On many occasions, the rational brain can’t release the emotional brain only through knowing and understanding what happened to it (in the case of a trauma, for example). For a lot of people, it’s easier to tell what happened than realizing, feeling, and putting their internal experience into words.

The frontal lobes are part of the rational brain. They’re in charge of balancing the person’s impulses and also their adequate behavior in a specific situation. A correct functioning of the frontal lobes is crucial to be able to carry out the following functions:

The rational brain occupies only 30% of cranial space and it basically manages our outside world. Understanding operations, reaching goals, managing time and sequencing actions are some of its main functions. Additionally, the cellular and biochemical organization of the neocortex of the rational brain is more complex to this organization in the emotional brain.

The Limbic System: What Is It and How Does It Work?
The limbic system is referred to by many as the "emotional brain". But what else does it do? And what exactly is it? Read more »
Link copied!
Interesting Articles
Psychology
Spencer Kagan and Cooperative Learning

Spencer Kagan is a renowned author who has carried out multiple studies on cooperative learning. This type of teamwork is different…

Psychology
Are You Living in a Prison of Perfection?

Some people live in a prison of perfection, trapping themselves in a self-imposed cell and throwing away the key, fascinated by…

Psychology
How Meditation Can Improve Your Daily Life

What it is happiness and how do you find it? This is the question we spend our lives trying to answer. We fill our life with lists, challenges and ideas that…