The Science Behind Personal Well-Being

Positive psychology was revolutionary. Today, we'll be talking about its origins and foundations. 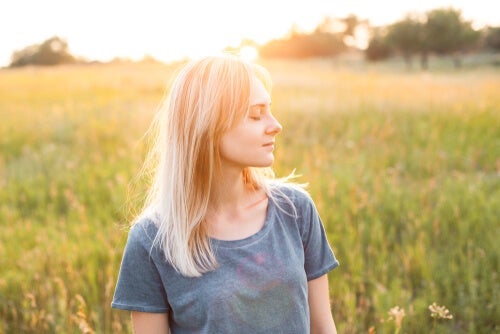 The science behind personal well-being is rather interesting. In the year 2000, Martin Seligman of the University of Pennsylvania and Mihaly Csikszentmihalyi of the University of Clarenot published in the American Psychologist journal a special monographic number entitled “Happiness, excellence, and optimal human functioning”.

It was dedicated to a new area of ​​psychology called positive psychology. It pretty much constituted the formal announcement or ‘birth certificate’ of a new psychological movement (Seligman & Csikszentmihalyi, 2000) that we could fit into something called “personal well-being”.

According to these authors, positive psychology is a science of subjective experience. It studies the processes that underlie human beings’ positive qualities and emotions. What this branch of psychology looks for is to improve people’s quality of life (Seligman & Csikszentmihalyi, 2000).

According to this, positive psychology has a lot to say when it comes to the science of personal well-being. As a science, it studies the processes that contribute to optimal functioning whether that’s individual, in groups, or institutional (Gable & Haidt, 2005).

As a dedication and source of inspiration, it seeks to promote the optimal functioning of three pillars. Subjective experiences (happiness, hope), positive traits (forgiveness, wisdom), and civic virtues (responsibility, altruism) (Linley & Joseph, 2004). In addition, it also focuses on preventing the manifestations of psychopathologies through the development of positive traits and qualities.

“What we want isn’t blind optimism but flexible optimism: optimism with its eyes open. We must be able to use pessimism’s keen sense of reality when we need it, but without having to dwell in its dark shadows.”

As we mentioned above, positive psychology works within the framework of the science of personal well-being. That being said, it tries not to go beyond the edges of scientific methodology. Remember that many researchers consider the latter to be the best means to understand phenomena.

This framework defines a clear way of acting. Precisely by trying to place itself within it, it attempts valid and reliable methodological strategies, which include quasi-experimental and correlational experimental designs. We say it tries because it doesn’t always achieve it. The reason for this is that sometimes it works with overly subjective measurements influenced by uncontrolled variables.

Keys to the science of personal well-being

According to science, being grateful, not comparing yourself excessively to others, and accepting circumstances that can’t be changed are keys to achieving personal well-being. Scientists from the University of Wisconsin, analyzed brain activity during a 12-year-long study on meditation and compassion.

In this neuroimaging study, it was possible to see how the areas associated with happiness were activated with more intensity and frequency when the person didn’t compare themselves to others, appreciated any circumstance, and accepted the situations they had to deal with. In this research, they studied brain functioning with different techniques and tools, such as nuclear magnetic resonance imaging (NMR).

The results of this study were so impactful that the National Academy of Sciences of the United States published them in 2004 and it cconstituts the fifth most consulted scientific reference in history.

Optimism before setbacks: a pillar for the science of personal well-being

Pessimistic people share a common characteristic. They tend to believe that bad events will last a long time and that they’ll bring tragic consequences without them being able to help it.

Moreover, many people believe that they can count on direct access to happiness, joy, comfort, and great pleasure. In reality, they should work on these feelings by exercising personal strengths and virtues. These latter ones are incredibly important, and people oftentimes turn a blind eye to them. Usually, in the midst of great wealth, they’re pretty much forgotten.

Pessimists often ignore that there many internal circumstances under their control. They have the ability to act in order to achieve something. This has a lot to do with things such as self-efficacy, coping mechanisms, and uncertainty tolerance (UT).

When it comes to our health, we may decide to act in four different situations. Deciding to stop smoking, remaining committed to exercising often, a balanced diet, and a good level of optimism. Believe it or not, several pieces of research state that optimism is just as important as the three other variables in this example.

We speak of a data-based optimism associated with your reality. Your abilities and resources are its shields. It’s inspired by the confidence that freedom provides for the individual. It expands the possibility of being creative, allowing your intelligence to flow along with the desire for self-expression.

“Well-being can’t exist just in your own head. Well-being is a combination of feeling good as well as actually having meaning, good relationships, and accomplishment.”

What’s the Real Revolution of Positive Psychology?
The revolution of positive psychology has taken the 21st century by storm. We take a closer look at it in this article! Read on. Read more »
Link copied!
Interesting Articles
Wellness
Are You Willing To Take Risks To Find Happiness?

Wellness
How to Make a Decision that Will Change Your Life

Wellness
I'm Releasing You from Me

I'll be okay, I assure you. I've found a lot of people who make me laugh. I've found myself again, in the mornings, when you're not there for coffee time; in the…

"How much does your life weigh? Imagine for a second that you're carrying a backpack. I want you to picture…

When we talk about sexual problems, we usually think about problems related to orgasms. We talk about things like premature ejaculation or…

Jack London represented a literary essence where the wild became physical and inspiring. Never has the genre of adventure and…