The Samurai and the Fisherman: A Beautiful Story 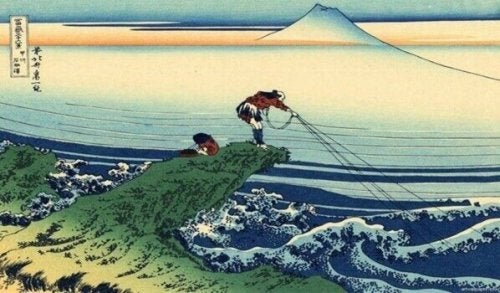 The story of the samurai and the fisherman is a beautiful tale with a surprising lesson. It all started in ancient Japan. There lived a samurai known for his great generosity, especially with poverty-stricken people.

One day, he was given the mission to work at a nearby village. After he finished, and just as he was about to go back home, the samurai saw a fisherman with a very sad expression on his face. It seemed that he was weeping. He decided to approach him and ask him what was wrong.

“Anger is a wind which blows out the lamp of the mind.”

The fisherman told him he was about to lose his boat because he owed money to a local shopkeeper. As he didn’t have the means to pay him, the moneylender had decided to keep the fisherman’s little boat as a guarantee. But if he lost his boat, the fisherman would not have a job and his family would starve to death.

The samurai listened attentively. His noble heart was moved by the story. Then, without hesitation, he pulled money out of his pocket and gave it to the fisherman. “It’s not a gift,” he said. He didn’t think giving things away was a good thing because it promoted laziness. “This is a loan. In a year, I will come back and you will return the money. I will not charge you any interest.”  The fisherman couldn’t believe it. He promised the samurai he’d do whatever it took to pay him back and he thanked him enormously for this gesture. However, this story had only begun.

The return of the samurai

When the samurai started looking for the fisherman on the spot they had met the year before, he didn’t see anybody. He asked the other fishermen around, but they couldn’t give him an answer. Finally, one of them was able to show him where the fisherman he was looking for lived. The samurai went there.

The samurai got very angry. He thought that his generosity being paid with theft was completely unacceptable. So, he started looking for the fisherman everywhere he could think of until he found him next to a cliff. The man was hiding.

When the fisherman saw the samurai, he was terrified. He only managed to say that the fishing season had been awful and that he didn’t have the money to pay him back. “Ungrateful,” yelled the samurai. “I helped you when you needed it the most! And this is how you choose to repay me?” The fisherman was speechless. The samurai then, drowned in rage, took his saber out to punish the fisherman.

The moral of the story of the samurai and the fisherman

When the samurai returned home, still shocked by what had happened with the fisherman, he saw light coming out of his room. It was weird. It was already very late. Slowly and carefully, he walked towards the bed and found his wife lying on it. He realized there was someone next to her. He came closer and saw that it was another samurai.

His wife came out to greet him happily. Behind her, the samurai’s mother walked out of the room as well. “Look who’s here!” said his wife. She had been scared of staying home by herself, and so she had asked her mother-in-law to keep her company. The samurai’s mother had put on her son’s clothes in case a thief broke in. If a thief saw her, they would think she was a warrior and would leave them alone.

The story of the samurai and the fisherman ended a year later. The samurai visited the fisherman’s village again. The fisherman was waiting for him. He had the money, plus interest, as it had been a good year for him. The samurai hugged him. “Keep that money,” he said. “You don’t owe me anything. I’m the one indebted to you.”

"Throughout my whole life I've understood love to be a kind of consented slavery. That's a lie: only freedom exists when…

Wellness
The Focus of Our Lives: Thoughts and Emotions

It is impossible to know our exact number of thoughts, but it is said that we have up to 70,000…

All of us live our personal dream. We may or may not be conscious of each step, but they’re there, playing…

Wellness
Love Has a Limit and Its Name Is Dignity

Love will always have a limit and that is dignity, because that respect that each of us has for ourselves…