The Rocky Horror Picture Show: A Sexual Revolution and Liberation 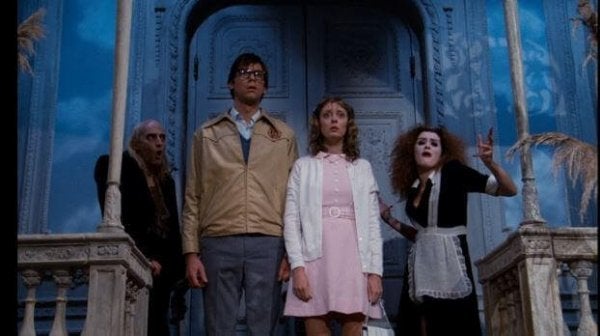 The Rocky Horror Picture Show is a musical created by Richard O’Brien. In 1975 they made a film adaptation of it that’s now seen as a cult classic. Even the soundtrack to the film has become a classic. The failm was also a big first break for the actors Susan Sarandon and Tim Curry.

The Rocky Horror Picture Show is a strange film right from the start. It’s all over the place: from comedy to science fiction, on top of parodying old B-horror films. It has a very mysterious and scary look to it, but it’s the “cheap,” surreal, and humorous air that really makes it special.

It wasn’t very popular when it first came out. But as the years have gone by it’s become like one of those myths we still talk about in modern times. It’s also a film you shouldn’t take too seriously, and it brings you into a carnival-like, unusual world. You either like it or you don’t, but nobody walks away without some kind of opinion.

It bursts into madness

A pair of striking red lips sing the song that starts off the film. It’s an almost hypnotizing introduction that grabs your attention, reminds you of old B-horror films, and makes you want to know what’ll come next.

There’s a criminologist in the story who acts as the narrator. He’s the one who tells you you’re going to witness something shocking and totally out of the norm. He shows you a young engaged couple, Brad and Janet. They’re a clear example of the kind of couple that would be “proper” and socially acceptable at the time. Of course the film takes that to the extreme, because this definitely isn’t one where they do things halfway.

The young couple has made a promise not to have sex until marriage. Then Brad asks Janet to marry him at their friends’ wedding. They make the characters look pretty ridiculous, because they declare their love for each other in such a “corny” way that it’s more funny than it is romantic. They decide to go see an old professor named Dr. Everett Scott to tell him the wonderful news.

When the course of their desinty shifts

On their way, they run into a heavy storm and can’t go any farther. Lost in the middle of the road, they heave a sigh of relief when they see a light and think they’ll be able to get help. But that couldn’t be further from the truth. Fate will bring them to a strange, sinister castle with the oddest kinds of inhabitants.

This is where you meet Magenta and Riff Raff, two servants in the castle, along with Columbia and Dr. Frank-N-Furter, an odd transvestite scientist. Frank-N-Furter, an obvious reference to Frankenstein, invites these new guests to his big party. It just so happens they came on a very special day, because he’s going to show off his new creation, Rocky: a muscular young blond man.

Brad and Janet make desperate efforts to understand what’s going on around them, because they find themselves in the middle of a party where everyone is aliens from Transsexual, Transylvania. But that’s all just totally normal. Or is it?

Sex was a taboo subject for a long time, and still is in some places. But it’s a natural thing that goes way beyond any kind of taboos we might impose on it. Sexual repression and liberation play a fundamental role in this film, along with accepting homosexuality, bisexuality, transexuality, etc…

All this happens in a comical way, in a kind of upside-down world where being heterosexual isn’t normal. Somewhere where Brad and Janet, who are socially accepted in their world, are the ones out of place. In other words, it makes what people saw as “normal” into the strange thing and normalizes what people saw as different.

They’re making a contrast, showing you a brutal clash between both worlds, between two totally opposite extremes. You should remember that this film is from 1975. So back then it was completely radical. It broke from all convention, and even now it’s still just as unique. It’s a film that opened up a path to explore other realities and made way for new musicals like Priscilla, Queen of the Desert.

Has sex always been such a taboo subject?

Sexual normalization and liberation definitely came late, around the end of the 20th century. But there’s still a lot of room left to improve. There are still plenty of prejudices, taboos, and discrimination against homosexuals, bisexuals, and transsexuals. Has it always been like that?

It’s weird that nowadays books and film like 50 Shades of Grey are so scandalous, controversial. What they do isn’t even that new. Back in the Middle Ages there were stories like the one about Rustico and Alibech, in Boccaccio’s Decameron, that are much more uncomfortable and scandalous than 50 Shades of Grey. Along those lines, and even more shocking, there’s the Marquis de Sade and his 120 Days of Sodom, written in the 18th century. This is a book with everything from torture, sex, coprophagy, and anything else the human mind can imagine. Michel Foucault deeply explored all this in a three-volume work called The History of Sexuality.

“If sex is repressed, that is, condemned to prohibition, nonexistence, and silence, then the mere fact that one is speaking about it has the appearance of a deliberate transgression.”

-Michel Foucault, The History of Sexuality-

From being invisible to being cult

You could say there was a kind of invisibility or a block when it came to talking about sex when this film came out. So The Rocky Horror Picture Show used parody, films, and music to bring it up. But the film didn’t even play in every film theater, and not that many people liked it. But as time has gone by, people have started to be much more interested in it.

There was actually so much interest that some theaters only played this film. They also did it in a very special way: the audience would participate and play out some of the scenes. This turned into an absolute tradition. Theaters would hire actors and the crowd would come dressed up and interact with the film itself.

We should point out that this tradition still exists today. The film is still very alive and they still play it in theaters all over. People still organize nights for it, where the crowd dresses up and throws rice at the screen during the wedding scene, for example. Or they’ll cover their head with a newspaper right when Brad and Janet do to shield themselves from the rain. There are even fan clubs for the film. It has gone from generation to generation, and there’s an unbelievable cult fascination surrounding this musical.

The most amazing thing is that there was no big ad campaign that caused this. What made it happen was word of mouth, and the fact that people started to interact with the film. It was when they started to dance along to “Time Warp” and came dressed up to all the screenings.

Where is it now?

The Rocky Horror Picture Show has had such an impact that they made a TV adaptation in 2016. There was even something new that wasn’t in the original: they cast Laverne Cox, a transgender actress, as Frank-N-Furter. Plus Tim Curry (the Frank-N-Furter from the 1975 version) was still in it. Along these lines, the series, Glee, also had an episode where they paid tribute to the film. But we could go on forever just talking about tributes and references to this unique film.

The Rocky Horror Picture Show is a musical that hasn’t gone out of fashion at all. It’s still around even now. It brought about a sexual revolution and liberation, and the core of the film lives on even today. It’s one of those films where you see something you missed before every time you watch it again. It created a whole new way of going to the theater and envisioning a film. The soundtrack left a huge mark and made way for even more films and musicals like it. It’s absolutely one of those films you have to see at least once in your life.

“And crawling on the planet’s face, some insects called the human race. Lost in time, and lost in space. And meaning.”

Stigmatophilia: Sexual Attraction to Piercings and Tattoos
Some people have a passion for piercings and tattoos, and some are outright sexually attracted to them. This is known as stigmatophilia. Read more »
Link copied!
Interesting Articles
Cinema, Television, and Psychology
The Painted Veil: The Paradoxical Nature of Human Relationships