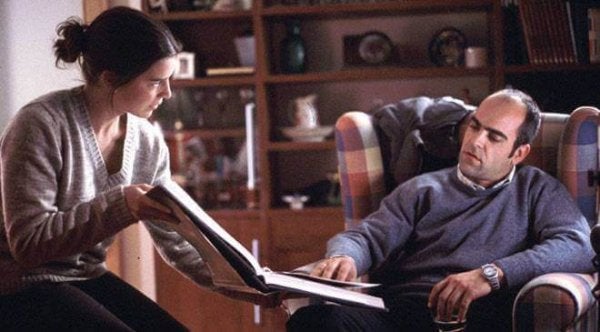 A subject that’s so unpleasant but yet, at the same time, so relatable and common is not easy to portray on the big screen. Gender violence, unfortunately, continues to claim numerous lives in 2018. I’m not talking about taking lives in a just a literal sense, but also depriving victims of their quality of life. Icíar Bollaín captures the backdrop, consequences, and outcomes of gender violence in her movie Take My Eyes (2003).

Bollaín creates films that pretend to be a true reflection of reality. She creates her films and characters from everyday life experiences. From the language and costumes to the gestures and scenarios, everything reflects an overwhelming sense of realism.

In addition to believing that more women should be behind the camera, this director also believes that the film industry is a way to bring about change. It’s a door that can try to right all the wrongs in today’s society.

Take My Eyes tells the story of Pilar, a woman who escapes to her sister’s house with her son. She does this to run away from her husband Antonio, who abuses her both mentally and physically.

Pilar gets a job as a cashier in a gift shop that houses the painting The Burial of the Count of Orgaz. She establishes relationships with her coworkers and becomes interested in art. At the same time, Antonio starts going to anger management sessions. He hopes that it will help him get his wife back.

It’s important to talk about how this film addresses this issue. It portrays each character and point of view as naturally as possible. In this day and age, it’s easy to judge the victim when you don’t know their situation first-hand. Similarly, it’s very easy to simply say “Leave him because he’s no good for you”. However, it’s not really that simple because abuse leaves victims confused and lost.

Take My Eyes allows the viewers to reflect on gender violence, how society addresses it, and both the victim’s and the abuser’s situations. With this film, Icíar Bollaín aims to bring awareness and change that can lead to a more equal society.

Gender violence doesn’t have to be simply physical or domestic. It’s important to note that gender violence, as the name suggests, is violence towards another person because of their gender. That is, it suggests the “superiority” of one gender over another. It’s usually associated with violence against women, but we shouldn’t leave out homophobic or transphobic attacks.

Similarly, violence isn’t just physical. It can be psychological, planting a strong feeling of insecurity, fear, and lack of self-esteem in the victim. Furthermore, it’s a lot harder for the victim to leave if their abuser is their partner or someone they trust. This is exactly what Pilar struggles with in the film.

The patriarchal system makes women look like “the weaker sex”. The RAE (Real Academia Española) accepted this definition until recently.

This system is still deep-rooted even though RAE eliminated this definition. You can still see it in the distinct definitions that are used to describe men and women, like “a good man” or “an honorable man”. In contrast, women are described as “a boring woman”, “a street woman”, or “a femme fatale”, among others.

That means that that the term “woman” still has negative connotations, especially when you compare it to the term “man”. Masculinity represents strength and bravery. In the film Take My Eyes, you see how Pilar’s mother tells her that a woman is nothing without her husband. She tells her that it’s her duty to get back with Antonio, even though he abuses her.

Similarly, the men Antonio goes to therapy with don’t think about the seriousness of their abuse. Since they work and are the breadwinners, their women have to do the chores and must obey and accept their rules. The men in Take My Eyes are the result of countless generations that believe and accept the idea of machismo. In their homes, the women must follow their orders. Women only have a say in domestic and family matters.

The evolution of women

Over time, women have managed to gain a place in the working world and, thus, have partially achieved their independence. However, it’s hard to change the minds of entire generations. Pilar witnessed her own mother being victimized by the system in her own home. Her mother did everything that “a good woman” was supposed to do: get married in a church, have children, and stay home to look after them.

Pilar’s sister, Ana, on the other hand, is able to see the pain and injustice her sister suffers. She’s also aware of her late father’s mistakes and has a healthy and equal relationship with her partner.

In contrast to the other men, Ana’s husband represents “the new masculine reality”, a man who helps with household chores and treats his wife as an equal. This is totally different from her mother’s conservative attitude and from Pilar, who has no self-esteem and isn’t capable of picturing a life without Antonio.

Thanks to her job at the museum, Pilar finds hope and an escape route in art. She wants to succeed in her job. Pilar finally begins to dream and have goals again.

In the museum, Pilar also meets her coworkers, who are all very different and have their own dreams. However, they have one thing in common: they’re all independent. These women are just like her sister Ana. Some have stable relationships and others chat with men online, but they all live their lives without depending on any man.

Icíar Bollaín created this new reality that’s intertwined with an unequal past. Each character represents a different reality. The men’s group therapy tells us that there’s still a lot of machismo. These types of men don’t understand that women aren’t objects.

Take My Eyes doesn’t leave any loose ends. It addresses every aspect of domestic violence and a society that encourages machismo. It also doesn’t leave out Juan, Pilar and Antonio’s son, who’s the silent victim in all of this. Also, because of Antonio’s abuse, Pilar also has to deal with a lot of emotional anguish.

However, the film leaves room for hope. It shows that something is changing in the world. It shows the different forms masculinity can take and that men are vulnerable too. Take My Eyes pushes us to reflect on a subject that unfortunately keeps taking lives: gender violence.

“Let nothing define us. May nothing hold us down. Let freedom be our own substance.”

Why is Gender-based Violence Increasing Around the World?
The stats presented by the World Health Organization (WHO) on gender-based violence are truly alarming. One in three women around the world has suffered it. Read more »
Link copied!
Interesting Articles
Cinema, Television, and Psychology
The Assassination of Gianni Versace: American Crime Story