Symptoms, Causes, and Treatments for Phalacrophobia

Phalacrophobia is an intense fear of hair loss. Those who experience this disorder don't tolerate the mere idea of baldness and display exaggerated reactions to any stimuli that suggest it. 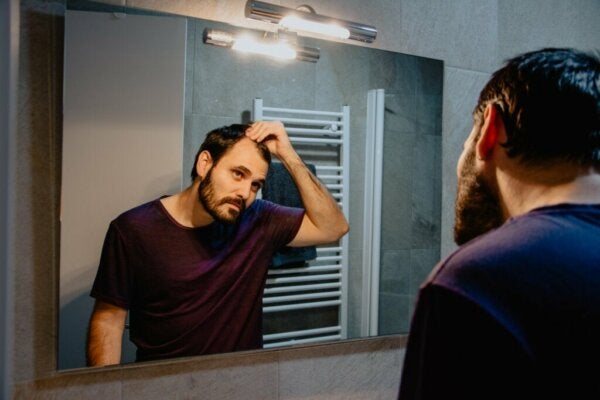 Any stimulus, even a word or a symbol, can motivate or arouse an irrational fear such as phalacrophobia (the fear of baldness). These fears are sometimes incomprehensible, although there’s a reasonable foundation for them.

Everyone is afraid of mutilation, basically of losing any body part. This is an atavistic fear and is part of the instinctive survival mechanisms. Furthermore, hair isn’t vital to a person’s health but is still part of healthy anatomy. Thus, phalacrophobia makes sense.

However, it doesn’t make sense to take this kind of fear to an extreme. Psychology considers phalacrophobia a disorder precisely because it’s extreme. The mere thought of being bald triggers intense states of anxiety in some people.

“Anyone can be confident with a full head of hair. But a confident bald man – there’s your diamond in the rough.”

Phalacrophobia is defined as an exaggerated fear of baldness. Exposure to any stimulus related to hair loss causes a state of extreme anxiety.

Just imagining the possibility of going bald unleashes panic in those with this disorder. Likewise, there’s a variant in which the terror is triggered by seeing a person with baldness. It’s an uncontrollable reaction that causes great discomfort to the person who fears it.

This type of phobia is actually present in both men and women, even though alopecia is more common in men. Those who experience this irrational fear are extremely sensitive to any comments about their hair.

The symptoms and causes of phalacrophobia

The fear is so intense that people with phalacrophobia undergo a series of physiological responses when they come into contact with the object of their fear. There’s tachycardia, tremors, dizziness, and anxiety crises.

Those affected by this problem continuously check their hair and are torn if they notice any loss. Likewise, they’re constantly worrying about their hair health and sometimes take exaggerated measures that border on the absurd.

Some psychological approaches point out that this phobia stems from fears associated with baldness. In particular, from the fear of losing hair and thereby reducing attractiveness or showing signs of aging. This is also related to feeling emasculated in some cases.

However, these explanations provide an account of the possible reasons but don’t explain the exaggerated fear. Psychoanalysis points out that this, like other phobias, stems from unconscious associations that don’t necessarily have to do with appearance, attractiveness, or youth.

A mechanism of displacement operates in the psychoanalytic plane, within the phobias. This is also known as metonymy. Thus, what actually causes fear in a person is something else, a sort of sexual desire they consider inconvenient. It’s either that or an aggressive impulse they consciously reject.

These people don’t admit that desire or rejection and, thus, they encapsulate and send them to the bottom of their mental sphere. One way of doing this is by displacing the fear towards another object — their hair, in this case. As you can see, the phobia begins and fulfills the role of continuing to cover up the desire or impulse they’re unconsciously rejecting.

Systematic desensitization is the most commonly used treatment for all types of phobias. It consists of exposing the affected person to what produces the exaggerated fear — gradually and with support. Thus, a psychologist can help a person gradually expose to and come into contact with what they fear.

Cognitive restructuring is another frequently applied treatment. It has to do with rethinking and deconstructing the beliefs behind the irrational fear. (Phalacrophobia and the ideas associated with the loss of attractiveness, aging, or the over dimensioning of personal appearance, in this case).

Finally, psychoanalysis also treats phobias but it does so within the context of a deeper analysis that encompasses early childhood experiences. It implies a much longer intervention that requires a high commitment from the affected person.

Perfectionism is something people often consider more of a strength than a weakness. But can that constant desire for perfection…

Every psychological evaluation process ends with the communication of its results through a report. Therefore, this report must be truthful,…