Selective mutism is a very complex childhood anxiety disorder characterized by a child's inability to speak and communicate effectively in particular social settings, such as in school. 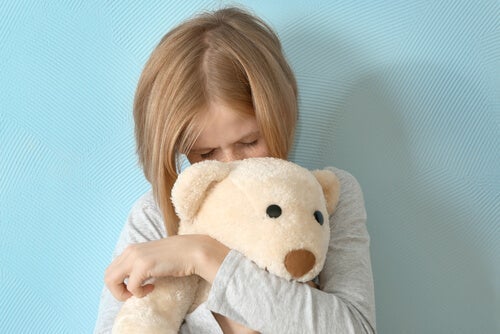 Today, we’re going to talk about selective mutism, a rather complex childhood disorder characterized by a child’s inability to communicate effectively in certain social settings. These children speak in environments where they feel comfortable but have great difficulty communicating in other environments.

This is a childhood anxiety disorder where the social environment plays a modulating role. Relating to others in environments where they don’t feel safe, such as a new school, can be overwhelming. As a result, many end up displaying a total or partial selective mutism in that particular environment, the degree of the mutism depends on the child.

Unlike traumatic mutism, where the child completely loses speech after experiencing a traumatic event, children with selective mutism don’t completely lose their ability to speak. They can speak and socialize in some environments, and with some people. Thus, their mutism is a way of avoiding social anxiety.

How does it develop?

A high percentage of children who suffer from selective mutism have a genetic predisposition to anxiety. They’re children who show signs of severe anxiety and extreme shyness from a very young age.

Statistics also show that many of them have a temperament that favors this often incapacitating condition. Some hypotheses point out that these inhibited children seem to have a low threshold of amygdala excitability. This would make them interpret events or circumstances as signs of potential danger, even when they aren’t.

Only 20-30 percent of them present some subtle speech, language, or learning abnormalities. In these cases, the additional stress makes the child much more anxious in situations where they need to communicate.

A small proportion of these children with inhibited temperament come from bilingual families. Alternatively, they may have spent some time in a foreign country. Therefore, they’ve been exposed to another language during their language development stage (between two and four years of age).

The behavior of a child with selective mutism

It’s important to point out that a child with selective mutism has a normal communicative attitude in environments they feel comfortable in. Parents of these children often comment on how talkative, funny, curious, and even stubborn they are when they’re at home.

The symptoms of selective mutism

Almost all of the symptoms of childhood selective mutism can be attributed to anxiety. Some of them are:

How do therapists treat selective mutism?

Intervention therapies for children suffering from selective mutism are focused on moving from nonverbal to verbal communication. The main goal is to reduce anxiety, boost self-esteem, and develop social and communication skills. There are several approaches in this intervention:

Whatever approach is chosen, the solution doesn’t involve forcing the child to talk. Rather, it’s a matter of transferring that sense of security that enables them to talk in certain environments to those in which they don’t have such a high degree of knowledge or control in order to reduce overall anxiety.

Clinical Psychology
Amitriptyline (Elavil): What Is It and What's It For?

Amitriptyline is a tricyclic antidepressant and painkiller. It was first discovered in 1960, and you're most likely to see it marketed…