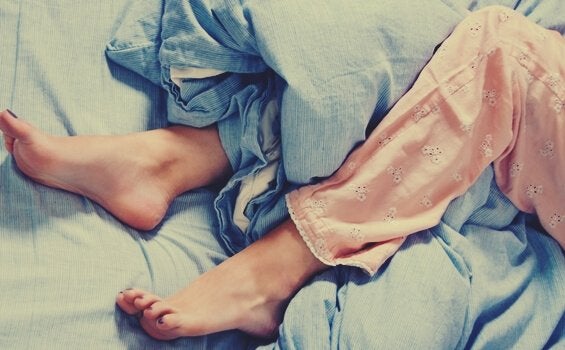 Restless legs syndrome is currently one of the most common neurological disorders. It is a very uncomfortable tingling and itching sensation in the legs, and the need to move them to get relief. The condition does not just affect a person’s sleep, but also has a marked impact on their emotions.

The disorder, also known as Willis-Ekbom disease, may seem strange and harmless to some people. How can a little tickling sensation in a person’s extremities be considered a “disorder”? How can symptoms that seem so innocuous have a diagnosis?

Restless legs syndrome is a neurological disorder involving an impulsive need to move your legs. It usually affects a person’s sleep, so it is also considered a sleep disorder.

Those who experience it daily know that it’s not as innocuous as it may seem. For some people, restless legs syndrome is tolerable, but for others it means not sleeping well at night, not being able to sit down during the day, and just feeling irritated and exhausted— both physically and mentally.

Restless legs syndrome: what are the symptoms?

Restless leg syndrome affects people of all genders, cultures and ages. It is common in small children, although on average it starts for the first time between 40 and 45. Symptoms include:

It’s important to mention that these symptoms don’t disappear or weaken. Rather, they tend to get worse.

Why do I have restless legs syndrome?

Like with many disorders and health problems, the origin of restless legs syndrome is not clear. That said, we do know that there are genetic factors and that the mechanism that triggers these symptoms lies in the nervous system. Relevant factors that have been identified:

What treatments are there for restless legs syndrome?

At this point we should make a recommendation. If you’ve started experiencing itching or other problems in your legs at night, see your doctor. The origin could be in a circulation problem or you may indeed have restless legs syndrome.

What starts off as a mild annoyance can end up affecting your quality of life and mental health. The insomnia and exhaustion can be a very big problem, so it should be treated as soon as possible.

In conclusion, there is not cure, and so treatment focuses on the symptoms. If you have restless legs syndrome, try new techniques and treatments. Find the approach that works best for you, one allows you to live a normal life and get a good night’s sleep.

Learn How to Fight Insomnia Effectively
Having a good day begins with having enjoyed a night of good sleep. Insomnia affects many people and fighting it is a primordial priority. Read more »
Link copied!
Interesting Articles
Culture
León Felipe's Most Memorable Quotes

León Felipe's quotes are like his life: surprising and exultant. No one ever thought that a pharmacist could have such…