Perfectionism in the Workplace Isn't a Virtue

Perfectionism in the workplace is one of those traits that people admire, for the most part. However, perfectionists don't necessarily enjoy it as they feel slaves of their own eagerness for avoiding mistakes and hiding their shortcomings. 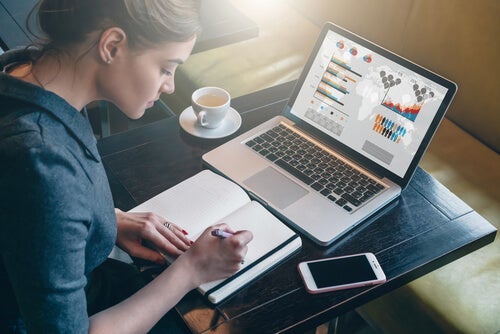 Perfectionism in the workplace is often considered a virtue. In fact, many people proudly mention this ability during job interviews. However, their attitude demands control over every little detail, which is why this desire for excellence is actually a flaw.

It’s clear how this ability has more negative aspects than positive ones when a perfectionist begins to work. They won’t meet their deadlines, for example.

The study “Work addiction: An organizational behavior as well as an addictive behavior?“ considers perfectionism a psychological addiction and says that the fear of failure imposes strict control, a high level of demands, and intolerance to mistakes. In today’s article, you’ll learn the truth behind this trait.

Perfectionism in the workplace isn’t healthy

An important facet of workers who are perfectionists is that they often end up with health problems. Anxiety and stress are frequent among them, but there’s more:

Many other problems can derive from perfectionism. For instance, a work overload due to an inability to delegate that doesn’t let them enjoy their social interactions is just a small part of the reason why they end up stressed out and highly anxious.

In addition to these emotions, let’s add how perfectionists can’t enjoy their leisure time because work is always in their minds. As a result, they may become impatient and irritable due to the notable lack of attention to their own needs, according to the article we mentioned above.

Depression due to control

According to the article “The pros and cons of perfectionism, according to research” extreme perfectionism can lead to indecisions and rigid and controlling behavior patterns and could also lead to depression.

Even though perfectionism at work is often linked to ambitious people with a desire to achieve high goals, these people always believe they need to do overtime. Thus, this is a rather harmful behavior.

Mistake intolerance could lead to self-esteem problems; while a very high self-demand could also lead to depression.

Mistake intolerance only frustrates a perfectionist. In addition, they tend to seek the approval of others, even though they’re mostly subjective. For example_

Imagine that a person is a wooden door manufacturing and installation expert and they’ve been doing it for many years. This person is a perfectionist who focuses on every minimal detail and can’t meet deadlines because they want to make sure the door is perfect. But then, they come across someone who doesn’t like the result. This is when all that self-demand skyrockets together with the feeling of maladjustment.

Can you stop being a perfectionist?

Perhaps we’ve reached the most important point. Is it possible to mitigate perfectionism at work and minimize its consequences? Yes, it’s possible. To do so, you must seek help and, above all, be aware that it’s not a virtue but a flaw.

A perfectionist must seek professional advice as soon as they begin to deal with the consequences of being one. The counselor will develop an appropriate intervention. For the most part, they’ll focus on any feelings of inadequacy that may be perpetuating this obsession. This is because a person who needs to be in control and seeks perfection usually has very low self-esteem.

Thus, perfectionists have tools with which to relax and reduce their wear and anxiety. Especially in those planes where this trait manifests itself with more force. As you can see, a perfectionist can feel better with patience and hard work. Are you dealing with perfectionism in the workplace? How is it impacting your sanity?

The Dissatisfaction of Perfectionism
Perfection isn't always perfect. Getting frustrated for not reaching perfection is the curious paradox of perfectionism. Learn more with us! Read more »
Link copied!
Interesting Articles
Organisational Psychology
How to Turn Down a Job Offer - and Still Look Good

Organisational Psychology
Occupational Burnout Will Be an Official Syndrome