Set from birth to have a prominent political career, Julius Caesar was a cunning and determined individual who has since become one of the most famous people in the history of mankind. 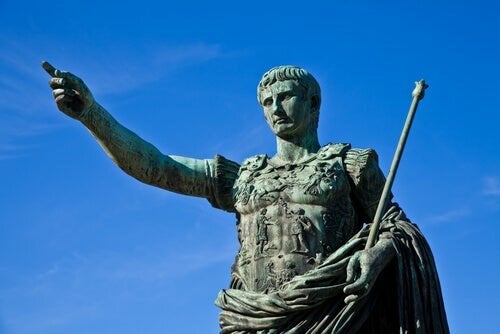 We don’t know a great deal about the early years of Julius Caesar, in the final years of the Roman Republic. However, what little we do know makes for interesting reading, particularly when it comes to understanding a bit more about his future career. These years were full of political conflicts and Rome was ravaged by corruption. In fact, murders and betrayals were an everyday occurrence.

At this time, the Roman Senate was divided into two consuls. On the one hand, were the optimates. They were connected to the Roman aristocracy. Furthermore, they wanted to keep the state under their sole control. On the other side were the populares. They were supported by the people.

However, the populates were not commoners themselves. They simply used the commoners’ meetings for their own benefit. Amongst their members was the ordo-equester. This was a kind of middle class.

The family of Julius Caesar

Caesar’s political career was marked by his family connections to a certain extent. The Julia family came from an ancient and prestigious line, although it never really came to much. Caesar’s father was a senator. He was linked to the populares group by the marriage of his sister to Gaius Marius. Gaius Marius was seven times consul. This was the most important office in the Republic. Holding such a powerful office meant his relatives were also assured a good standing in society.

Caesar altered his rather scant heritage by arranging to marry Cosucia. She was the daughter of a wealthy gentleman. All Caesar’s training was in the field of politics. He was well versed in the classics. Furthermore, he soon showed literary and oratory skills. He would later demonstrate these skills in his writings. Caesar wasn’t particularly robust but he did receive extensive physical training. In fact, he became a skilled rider. He was also dedicated to the military.

As well as influence from his father, Caesar received a great deal of advice from his mother, Aurelia. Her family, the Cottas, also influenced him.

Aurelia respected Roman traditions. She also took the moral virtues of the time extremely seriously. Caesar inherited these values. In fact, he became well known for them. Caesar greatly admired his “matrona”.  Indeed, he was unusually affectionate towards her throughout his life.

Turbulent beginnings to a celebrated career

In 84 BC, Caesar’s father died. Caesar then became head of the family according to Roman tradition. Caesar was sixteen years old, therefore an adult.

Cinna, the successor of Gaius Marius, ruled the city at this time. Caesar broke his promise to his fiancée and married Cinna’s daughter, Cornelia, instead. This assured him of a rapid social ascent. In fact, whilst aristocratic supporters were being purged from the city, Caesar was granted the priestly post of flamen dialis.

However, not all of Rome supported Gaius Marius and Cinna. Sulla was one of these enemies. He was both a successful soldier and a politically important figure. In 83, BC Sulla returned to the Urbe after fighting in the provinces. He demanded power and began to purge his enemies. However, his enemies were the same individuals as those surrounding Caesar. Consequently, it was amazing that Caesar actually managed to escape. Perhaps it was because he was young and looked harmless. Perhaps it was due to his priestly position. Or perhaps it was because he had so little to steal.

Caesar’s marriage to Cornelia turned out to be very inconvenient. In fact, it turned out that, if Caesar wanted Sulla’s friendship, he’d have to reject Cornelia and marry Sulla’s niece. However, maybe he was more moved by love than political leanings because he refused to give up Cornelia.

His only alternative was to flee Rome and go to Northern Italy. There he contracted malaria, had to bribe several soldiers not to hand him over, and was even captured by pirates. However, he never lost his determination.

Sulla ended up granting Caesar his official pardon. Then, Caesar decided to flee further, to the East. Sulla stripped Caesar of the flamen dialis. However, this action actually benefitted Caesar. This was because, for as long as he’d held that priestly position, he’d been prohibited from holding any political office or from participating in any military action. Now he was permitted to fight in Lesbos, in Asia Minor, where he had quite a lot of influence.

Sulla died in 78 BC. Caesar returned to Rome as a military hero. He was now free to begin his brilliant political career. The rest of the life of this seemingly harmless and frivolous young man is history.

5 Types of Leaders
We could talk about dozens of features that make up the different types of leadership, however, it would be easier to review each one's characteristics. Read more »
Link copied!
Interesting Articles
Biographies
Ferdinand Magellan: Biography of an Epic Traveler