Hugs Leave an Imprint on Our Genes

Hugs leave an imprint on our genes. This gesture of sincere affection nourishes not only our heart and acts as medicine for the soul, but also creates an imprint in our epigenetics, thus promoting psychological well-being. 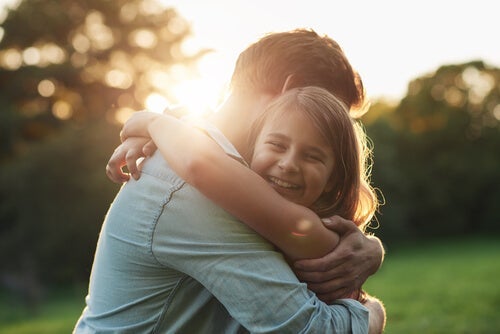 Hugs leave an imprint on our genes. Science has just discovered something wonderful. Physical contact, for example, comforting babies skin to skin with our caresses and constant affection, leaves an imprint on their brains. This molecular imprint is imprinted on their genes like indelible ink. Amazingly, it will influence their personality and even their immune and metabolic systems.

Human beings need the contact of their loved ones in order to reach their full potential. It’s clear that no one dies from a lack of affection, and not being touched by love won’t make us drop dead.

However, in a manner of speaking, they’ll wither, and they’ll suffer from that deprivation of love and emotional nutrients that make human beings more secure and fulfilled.

Body, mind, and skin share a connection that goes beyond our neural centers or sensory receptors. These are the scenarios where biological markers such as oxytocin orchestrate basic, essential processes. Thus, people often say that hugs are like medicine for the soul. We could go a step further and affirm that touching and being touched improves our epigenetics.

They’re imprints of love that one generation can leave on another. A statement of this depth may arouse our skepticism, but some studies support this beyond mere human intuition.

These are findings that invite us to reflect on whether constant affection towards a newborn baby will influence their future ability to care for those around them.

“If you can find someone like that, someone who you can hold and close your eyes to the world with, then you’re lucky. Even if it only lasts for a minute or a day.”

There’s a truth as dramatic as it is sad, and one that few people talk about. We’re referring here to children who grow up in orphanages. Child development experts know that, in the most disadvantaged countries, there are rooms full of babies who don’t make a single sound.

These silent rooms in orphanages reveal the response of little ones who have learned early on that crying will do them no good.

In those sad places, no one comes to comfort them, nor to hold them in their arms. No one nurtures them with that special affection that relieves fears and meets emotional needs. A tragedy like this inevitably ends up having a profound impact on their lives.

Studies, such as the one conducted at the University of Wisconsin-Madison by psychopathologist Seth Pollak, made some startling discoveries. According to these findings, these children’s cognitive development will be deficient, and they’ll be more vulnerable to stress and anxiety. As a result, there’ll be indirect, but negative consequences for their immune system.

Growing up either with or without hugs will affect our future as human beings either positively or negatively. The key to all this is in our DNA and the striking mechanism that makes up what’s called “epigenetics”. Let’s find out more about it below.

How do hugs leave their mark on our genes?

A study conducted by the University of British Columbia in Canada was published in the scientific journal Development and Psychopathology. In it, Dr. Sarah Moore told us for the first time about some fascinating facts. The amount of close contact, comforting affection, hugs, caresses, and words that babies receive not only helps them feel secure and loved. The findings also showed that:

What about adults? How do hugs benefit us?

The hugs we receive in the first few months make an indelible imprint on us.

So much so, that this outpouring of cuddles, affection, caresses, and skin-to-skin contact doesn’t only determine a baby’s correct neurological development. These early manifestations of sincere love even influence later generations, something that we had already proven in some way with these findings regarding love deprivation.

In other words, the traumas experienced by one generation can be passed on to the next. This came to light in a study conducted by Dr. Torsten Santavirta’s team at Uppsala University, where the effects of World War II were seen in several families.

But what about in adulthood? Do they perhaps have the same effect? Yes, hugs leave an imprint in adults too! Hugging in adulthood continues to have a very healthy effect on an adult’s brain. The trigger for this well-being, which is capable of relieving stress and anxiety, is a neurotransmitter that also acts as a hormone: oxytocin.

We all need to touch and be touched. Our skin, whatever our age, needs this special language, which in many cases is more important than words. Caresses and hugs act as nourishment for the roots of our lives to foment bonds, eliminate uncertainties, and build happier environments where we can truly develop as people.

Epigenetics: Can Tragedies be Inherited?
Negative experiences can leave a genetic trail in the sufferer and transmit it to the next generation. Learn about how you can inherit tragedies. Read more »
Link copied!
Interesting Articles
Research
How Generosity Affects the Brain