Giotto di Bondone, An Encounter Between Art and Faith

One can summarize the style of Giotto di Bondone through the dominant figures that are simple and severe, placed in abstract environments. He skillfully used anatomy and perspective as narrative devices. The question is, were all of the works attributed to this painter actually done by his own hand? 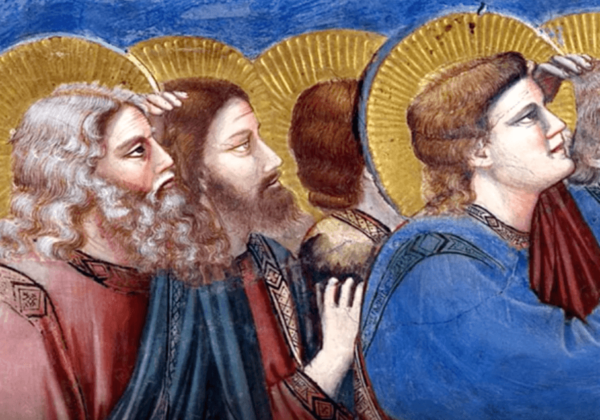 Giotto di Bondone was born between 1266 and 1276, in Vespignano, near Florence, Italy. He was a rather influential 13th-century painter. In fact, many art historians consider his work a turning point for the development of the arts in Europe.

His innovative works influenced the Renaissance style that developed a century later. Many still consider Giotto the father of European painting and the first of the great Italian masters.

The attributions of his work remain problematic and are profoundly speculative for many researchers. This is because little of his life and few of his works are well documented and also due to the difficulty of following a stylistic chronology.

“Every painting is a voyage into a sacred harbour.”

Much of Giotto’s biography and artistic development comes from the evidence of surviving works. Even so, historians can’t attribute several of these works to him with certainty.

Stories about his life and work mostly originate from the late 14th century. This is because Giorgio Vasari, a painter and art historian, described Giotto in his book The Lives of the Most Excellent Painters, Sculptors, and Architects.

Giotto was born in the year 1266, 1267, or 1276. The difference of 10 years is of fundamental importance in the evaluation of his early development. For instance, the difference is crucial to the attribution of the frescoes in the Basilica di San Francesco d’Assisi.

Historians are certain that Giotto died on January 8, 1337, as Giovani Villani recorded it in his Villani’s Chronicle. In it, he states that Giotto was 70 years old when he died.

People have always assumed that Giotto was a pupil of the prominent artist Cimabue. Many consider him the most prominent painter in the Italy of the late 13th century.

Cimabue tried to step aside, as no artist before, from the stylized forms of medieval art with the power of reality and imaginative force. Thus, his work inspired Giotto due to the power of his lines and ability to incorporate dramatic tension.

Human beings are the exclusive subject in Giotto’s works, in the context of the great Christian drama of sacrifice and redemption.

By comparison, many of his predecessors and immediate successors painted a puppet show with lifeless mannequins. Giotto broke with the Byzantine tradition and gave way to the emotionality of the Franciscan approach to Christianity.

The problem of Assisi

There’s a fundamental problem in Giotto’s studies though; the attribution of the Assisi frescoes. Did Giotto indeed paint them? What exactly did he paint?

There’s no doubt he did work in Assisi. Actually, a long literary tradition, dating back to Riccobaldo Ferrarese’s chronological compilation in 1319, attests that he did.

There’s evidence of Giotto’s works in the great Basilica di San Francesco d’Assisi. People attribute him several of the frescoes in the upper and lower churches.

The most important one is the cycle of 28 scenes from the life of St. Francis of Assisi painted in the middle of the upper church. In addition, he seemingly painted the Franciscan Allegories and some other frescoes in the lower church.

Most of these scenes are revolutionary in their expression of reality and humanity. In fact, he intensely captured the emphasis on the dramatic moment of each situation and the inner reality of human emotion through crucial gestures and glances.

However, someone in the 19th century observed that all these frescoes, although similar in style, couldn’t be of the same authorship. Thus, skepticism and the belief that these frescoes and the cycle of St. Francis dated from a period after Giotto’s death took hold. This extreme view has been abandoned, for the most part.

Understandably, Giotto was so successful as a young man that he received the most important commission to paint the official biography of St. Francis, written around 1266 by St. Bonaventura. Today’s mental image of St. Francis comes largely from these frescoes.

People attribute three major works in Rome to this painter. The large mosaic of Christ walking on water, La Navicella, located above the entrance to St. Peter’s, the altarpiece painted for Cardinal Stefaneschi at the Vatican Museum, and the fresco fragment of Pope Boniface VIII proclaims the jubilee in 1300, in San Giovanni in Laterano, Rome.

There are similar problems of attribution for these Roman works. Giotto may also have done the Crucifix in Santa Maria Novella and the Madonna in San Giorgio and Massimiliano Dello Spirito Santo (both in Florence) during this period.

The cycle of frescoes in the Scrovegni Chapel in Padua is an example of Giotto’s early development. The establishment of the chapel happened in 1303 and its consecration on March 25, 1305. In them, there’s an illustration of the founder offering a model of the church in Last Judgment, which covers the entire west wall.

The rest of the small bare church has frescoes on three levels. These depict scenes from The Lives of Joachim and Anne, The Life of the Virgin, The Annunciation (in the choir arch), and The Life and Passion of Christ, concluding with Pentecost.

Below these three narrative bands is a fourth containing the monochromatic personifications of the virtues and vices. The frescoes are in relatively good condition and possess enormous narrative power.

The legacy of Giotto di Bondone

Giotto achieved exceptional fame during his lifetime. In fact, Dante mentions him in The Divine Comedy, which cemented a legend that lingered in the 14th and 15th century in Italy. Many others began to crystallize around his name from then onwards.

Many consider this painter to be the man who ended the Middle Ages and marked the beginning of modernity. However, it wasn’t until the Renaissance, with Masaccio and Michelangelo, that his true successors emerged.