Generosity from a Psychological Perspective

In today's article, we'll analyze generosity from a psychological perspective. We know more about it every day, especially regarding the positive consequences of this attitude of giving that doesn't expect anything in return. 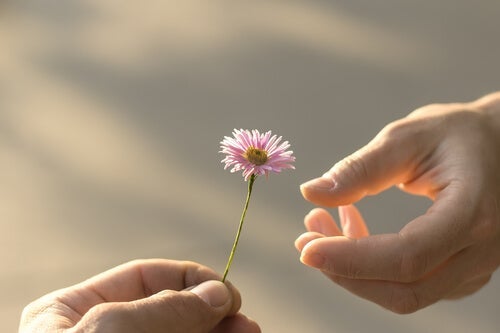 There have been several new studies in recent years on generosity from a psychological perspective. They reveal data that would support the benefits of practicing it. Some humanist-existentialist authors, especially Erich Fromm and Victor Frankl, emphasized ethical values ​​and love.

In this regard, Fromm affirmed that ethical values ​​and love are sources of psychological well-being and a characteristic of an emotionally healthy person (Oberst, 2005).

Generosity and gratitude are two important concepts that denote the excellence of personal character (Emmons & Sheldon, 2002). In addition, they’re complementary in a sort of way. Indeed, the relationship between these two concepts begins with an affective process of “giving”. Be it something material, advice, or even just helping someone without expecting anything in return. Generosity is a prosocial behavior that aims to improve another person’s well-being.

Maslow (2001) spoke of the “generous nature” of human beings, as opposed to selfishness, and of “healthy generosity”. He states that there’s a relationship between generous behavior and psychological health because generous behavior comes from “abundance” and “inner wealth”. On the contrary, selfish behavior is synonymous with inner poverty, typical of neurotic people.

Gratitude and generosity from a psychological perspective

Ethicists define gratitude as a moral virtue that, as such, denotes good behavior (McCullogh, Kilpatrick, Emmons & Larson, 2001). However, the definition, as moral behavior, forces us to thank the benefits received as impersonal mandates (Blumenfeld, 1962).

Recognizing and appreciating the person who helped us doesn’t mean that we’re indebted to them. Although many people have suggested that gratitude and indebtedness are equal, they’re essentially different (Watkins, Scheer, Ovnicek & Kolts, 2006). Debt requires payment.

It’s important to emphasize that the action of the giver must, in fact, be generous and that it’s not about seeking profit or rewards. A truly generous action doesn’t seek to acquire creditors for the purpose of selfish satisfaction.

Is generosity an indicator of mental health?

Generosity has been widely studied, especially in the context of the scientific search for the origin of altruism. In addition, several empirical studies currently consider it a good indicator of mental health. The feeling of belonging to a community is one of the foundations of psychological well-being. This is why its absence is an indicator of poor psychological adjustment and mental disorders,

When a child fails to develop a certain sense of community as a result of an overly authoritative or overly permissible upbringing, among other factors, feelings of non-belonging, inadequacy, and the infamous inferiority complex arise (Oberst, 2005).

Inferiority feelings are difficult to tolerate. Therefore, the usual tendency is to compensate and overcompensate for them with what Adler calls “eagerness for superiority or eagerness for power“. This is a characteristic that, according to Adlerian psychology, is often the root of many psychological disorders.

An individual with inferiority feelings and, therefore, with a poor sense of community, would develop what Adler calls “neurotic disposition” (Adler, 1912/1993). It can manifest in several ways that we would define today with more precision in neuroticism, as a personality trait, in addition to psychosomatic disorders and personality disorders.

Thus, a distortion of emotional life arises from this supposed inferiority. That is, the neurotic person is no longer able to relate to others in a natural, spontaneous way. They constantly try to achieve conceited triumphs to compensate for their inferiority.

When this provision accentuates or psychosocial problems converge, character deformities such as greed, resentment, malice, and cruelty may manifest.

False Generosity: A Narcissist’s Trap
False generosity is extremely common. Politicians, bosses, family members, and even a lot of us do it when we want something from someone. Read more »

Link copied!
Interesting Articles
Social Psychology
Get to Know the Psychology of Persuasion

Social Psychology
Social Dramaturgy: How We Develop Masks to Interact

It's possible to analyze our interactions with others as if we were in a play. Namely, as if our social…