Daniel Kahneman is a Nobel prize-winning psychologist and economist. Today, we'll reflect on some of his most thought-provoking quotes. 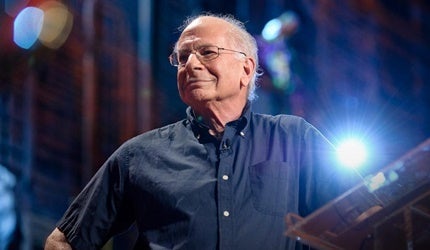 Daniel Kahneman is one of the few psychologists to ever win a Nobel Prize. The committee chose to honor him for his groundbreaking research on how people make economic decisions. Given his knowledge of decision-making and his profound insight, Kahneman’s quotes are worth reflecting on.

Daniel Kahneman worked for years as a college professor and researcher in schools such as Harvard University and the University of Michigan. He has also published best-selling books such as Thinking, Fast and Slow, which became popular due to its informative and accessible writing.

Now, let’s take a look at some of Kahneman’s most important quotes.

1. The mind makes everything worse

“Nothing in life is as important as you think it is, while you’re thinking about it.”

This first quote from Daniel Kahneman refers to the human tendency to see everything in the worst possible light. Along those same lines, psychologist Sonia Cervantes said: “There’s no worse storm than the one you create in your mind”.

If you’ve ever suffered from anxiety and obsessive or repetitive thoughts, this sentiment is sure to resonate with you. The situations in your mind usually haven’t happened yet, and probably never will, but you suffer anyway. Consequently, it’s important to take a step back from your thoughts and observe them without judgment.

2. It’s hard to admit your own mistakes

“It’s easier to recognize other people’s mistakes than our own.”

This quote is a reminder of the human tendency to avoid taking responsibility for mistakes. Kahneman talks about how most of us hate it when other people question our actions. When you make a decision and someone doubts you, it affects your confidence and you feel vulnerable.

This isn’t a positive trait. The inability to admit your own mistakes tends to lead to inflexibility with rules and criteria. Your beliefs also play a role because, if you do something based on your beliefs and someone labels it a mistake, it can cause cognitive dissonance. After all, your beliefs are a part of you and it’s easy for you to consider them absolute truths.

3. Placing too much trust in your beliefs

“…a puzzling limitation of our mind: our excessive confidence in what we believe we know, and our apparent inability to acknowledge the full extent of our ignorance and the uncertainty of the world we live in.”

This quote is closely related to number two although, in this case, Kahneman emphasizes the fact that you tend to ignore what you don’t know. A more accurate description of that tendency might be that sometimes you ignore it, but often you attack it.

You see it in the news and even more on social media: people defending causes that align with their beliefs without acknowledging the existence of other points of view. Beliefs are just beliefs. They’re not absolute, and it’s hard to determine which are “good” and which are “bad”. Questioning beliefs and seeing how they align with certain values is important.

“People are very sensitive to pressures and the immediate consequences they can have. The long-term effects are more abstract and hard to keep in mind. Global warming, for example. When the threat becomes concrete it will be too late to react.”

This fourth Daniel Kahneman quote tackles human short-sightedness. Some very difficult issues require immediate action but are easy to postpone because their consequences seem so far off. It’s as if you believe (or want to believe) that it won’t affect you or that it’ll take care of itself.

The climate change example is one of the most obvious, but this way of dealing with the world is more present in your life than you might think. Just reflect for a moment on your experiences with relationships, for example. How often did you see something coming and could have done something about it but you didn’t act in time? Humans are experts at procrastinating, even when the stakes are high.

5. There are no limits to our blindness

“We can be blind to the obvious, and also blind to our blindness.”

This last quote is from Kahneman’s book Thinking, Fast and Slow. It invites us to reflect on the incredible human ability to ignore what’s happening directly in front of us. Not only that, but how we aren’t even aware of our own blindness.

Opening your eyes is a hard thing to do. Everything you come into contact with is filtered through your beliefs, first impressions, and bad information that you consider the truth. The fact that you aren’t aware of how you’re using the filters and how they shape your opinions limits your ability to think critically. The world you think you’re working with isn’t real, it’s just a version of the world you’ve built for yourself.

These five quotes from Daniel Kahneman are a reflection of his way of thinking. His passion for the human mind inspired him to write and share his thoughts with the world. Each quote helps us learn something new or remember something we’d forgotten.

The Only Way to Change Your Reality Is to Change Your Thoughts
There's a reality out there, outside of us, but we don't actually interact with it. The only reality we truly live in is a simulation created by our brain. Read more »
Link copied!
Interesting Articles
Sayings
Five Unforgettable André Breton Quotes

Arthur Miller left us many quotes that have gone down in history. They come from his works, the interviews he…