Extrapyramidal Symptoms: What Are They?

Extrapyramidal symptoms can manifest as a result of medications that block your dopamine receptors or as a result of damage to particular parts of your brain. In this article, we'll study these symptoms. 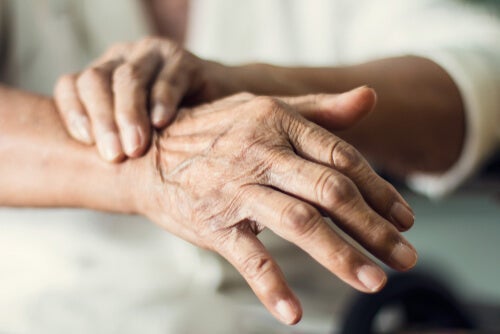 Extrapyramidal symptoms are all motor problems produced most often as a result of antipsychotic medications. It’s essentially an illness of the motor functions that happens because of damage to the extrapyramidal system. That system is basically the brain’s basal ganglia and the gray matter and pathways in them.

The extrapyramidal system deals with your control over voluntary movements and muscles. It also deals with automatic, instinctive, and learned movements. This is why whenever there’s an issue with the system, you may start to experience problems with movement, stretching, and posture.

Extrapyramidal symptoms generally happen as a negative reaction to antipsychotic medication. But there are also cases where they can happen because of damage to certain areas of the brain. The basic cause is a lack of dopamine regulation. Dopamine is the main neurotransmitter involved in human motor function.

Antipsychotic, or neuroleptic medications block D2 dopamine receptors. They do this to keep the dopamine pathways from lighting up in the brains of patients with psychosis. But blocking those pathways can cause some changes to motor function, or what we call “extrapyramidal symptoms.”

Typical antipsychotic medications tend to cause the most problems with extrapyramidal symptoms. In fact, atypical medications actually came about to get around these common side effects. The medications most likely to cause these symptoms are haloperidol and chlorpromazine.

Here are some of the main symptoms people experience:

There are also lots of other motor symptoms associated with problems of this nature. That includes things such as:

For the most part, when for some reason the treatment needs to happen fast, they’ll use anticholinergic and dopaminergic drugs. But in most cases, the basic treatment for extrapyramidal symptoms is to take the patient off of the medication that caused them.

But as far as preventing extrapyramidal symptoms from antipsychotic medications before they begin, the main thing to do is keep close control of the dosages. You also need to be on the lookout for any possible negative reactions and react quickly to avoid further problems.

7 Signs of Early Onset Parkinson’s Disease
These seven symptoms can help you to indentify early onset Parkinson's disease in those under 50 years of age, including adolescents. Read more »
Link copied!
Interesting Articles
Health
How Parents Affect Their Children's Mental Health

Experts have largely ignored the psychological aspects of diabetes since the illness was first discovered. However, those who suffer from…

Diet and Nutrition
The Psychological Benefits of Intermittent Fasting

We live in the age of diets. There are diets to detox your body, ketogenic diets to lose weight, diets for…