Esketamine - A Nasal Spray Against Depression

Recently, the Food and Drug Administration (FDA) approved, Spravato, marketed by Janssen - for the treatment of resistant depression. It's a new drug of intranasal administration that contains esketamine as the active ingredient. 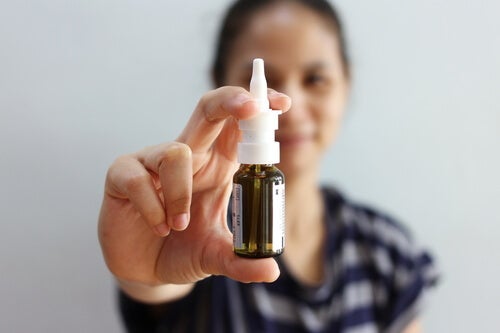 Esketamine is an innovative drug with decent prospects in the treatment of depression, especially in those cases that are unresponsive to common treatments. This is because it’s mechanisms are different than other known antidepressants.

This drug is a part of the family of ketamine, a widely used general anesthetic for intravenous or intramuscular use. It has hypnotic, analgesic, and amnesic properties and is fast-acting, though short-lasting. Some people use it for recreational purposes.

Ketamine is a combination of two enantiomers. These are specular molecules that mirror each other. Esketamine is the S enantiomer of ketamine, the most potent and active enantiomer. Furthermore, the other enantiomer is arketamine.

“Every man has his secret sorrows which the world knows not; and often times we call a man cold when he is only sad.”

Recently, esketamine was approved by the FDA for treatment-resistant depression, along with another oral antidepressant.

The drug Spravato, marketed by Janssen, is administered intranasally. Doctors prescribe it for acute depression in adults after other antidepressants didn’t work.

Several studies assure the effectiveness of esketamine in decreasing suicidal ideation. Particularly in those depressive patients who are conventional treatment-resistant and, therefore, at risk of suicide.

The main advantages of using it are:

Esketamine is an uncompetitive antagonist of the N-methyl-D-aspartate (NMDA) receptor, a glutamate receptor. In this regard, esketamine acts on the regulation of brain levels of this neurotransmitter.

Glutamate is an excitatory neurotransmitter linked to suicidal behavior. (Esketamine differs from the traditional mechanisms of antidepressants). Similarly, some believe esketamine can help restore synaptic connections in neurons. However, researchers don’t know the exact mechanism by which esketamine exerts its antidepressant action.

It also acts as a dopamine reuptake inhibitor to some degree. In fact, it increases its activity in the brain due to this. However, it doesn’t interact with sigma receptors, unlike ketamine.

The drug is only available in the United States through a restricted distribution system. This is due to the risk of side effects and, also, to its potential misuse. The dispensation of the drug must have a package insert guide to the drug and describe its uses, contraindications, and side effects.

Actually, this medication must be administered at a doctor’s office, under supervision due to its likely side effects. Physicians must monitor their patients during the two hours following the drug’s administration.

According to the lab that commercializes it, the patient and the prescriber must both sign a waiver. Also, the patient must prove they have a safe way to travel back home because they shouldn’t drive during the day of this treatment.

Intranasal esketamine can lead to serious side effects such as:

Generally, these side effects appear quickly after administration and usually disappear throughout the day. However, it’s important to take them into account and control them.

On the day of treatment, a patient mustn’t drive or operate machinery or do anything that requires them to be alert. They must follow their doctor’s instructions.

In conclusion, intranasal esketamine is a promising new fast-acting treatment option for severe depression. It opens a rather interesting window as an innovative approach to depression research.

Selling and prescribing this drug is still illegal in the European Union. However, it’s currently awaiting approval by the European Medicines Agency (EMA). For the time being, we have to wait and see how it works and how its research evolves in the longer-term.

How Antidepressants Work
Antidepressants work by triggering physiological changes which improve your mood. The chemical action of the drugs are what cause those changes. Read more »
Link copied!
Interesting Articles
Treatments
Weight Gain Associated with Psychoactive Drugs