Some studies by Donald Redelmeier show data that support the idea that more traffic accidents occur during a full moon. Similarly, psychiatrists Wehr and Avery also found evidence of what seems to be another type of moon influence. 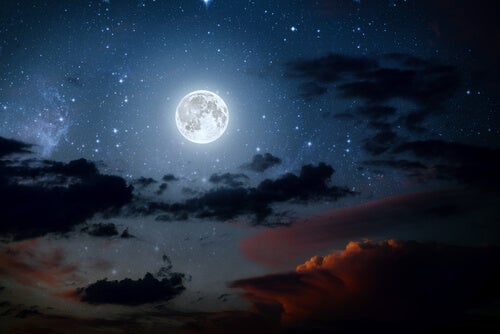 The British Medical Journal published some studies by Donald Redelmeier on the effects of the moon. According to these, the full moon increases fatal traffic accidents. This is what the scientist concluded after collecting and analyzing a series of data from several countries around the world.

Donald Redelmeier’s studies made the Christmas issue of the aforementioned magazine. These types of editions come out once a year and include funny, striking, and surprising research, always based on scientific facts.

Humans have known about the spell of the moon for a long time. It continues to inspire poets, lovers, and scientists just as it has before. The moon shines in the night like an oasis in the middle of a mystery. But does it really exert such influence in people as to lead to fatal accidents? Donald Redelmeier’s studies seem to prove so.

“There are nights when the wolves are silent and only the moon howls.”

Donald Redelmeier’s studies have a statistical foundation. This scientist, who is a researcher at the University of Toronto, along with his colleague Eldar Shafir, another researcher but at Princeton University, made a peculiar analysis. They monitored traffic accidents between 1975 and 2014, in the United States, Canada, the United Kingdom, and Australia.

They looked for patterns and they certainly found them; although, not exactly the ones they expected. Thanks to their inquiries, they detected that lethal traffic accidents seemed to increase and, as a consequence, the number of injured and deceased people during full moon nights.

According to their data, there were 988 nights in which there was no full moon during the period they studied. 8,535 traffic accidents took place throughout that time and let to an average of 8.64 full moon-related deaths every night.

In the same period, out of the 494 nights with a full moon, 4,494 traffic accidents happened with an average of 9.1 deaths per night. The average during the so-called “super moons” increased to 10.6 deaths per night.

They attribute them to the spell of the moon. In fact, they found that many drivers are enthralled by the moon’s beauty and get distracted. Thus, this is what leads to more accidents.

The moon spell according to Donald Redelmeier

Donald Redelmeier’s studies are an anecdotal way of answering a question that human beings have asked themselves for thousands of years. What influence does the moon exert on human behavior? The legend of the “werewolf” is a fantastic way to answer it: the most animal instincts come out in the human being when there’s a full moon.

Outside of fantasy, there are many who continue to postulate the influence of the moon on animal behavior. Without going too far, Aristotle was convinced that attacks of madness and epilepsy occurred in direct relation to the phases of the moon. In addition, Pliny the Elder, a Roman naturalist, fully agreed with this hypothesis.

In fact, the word “lunatic” is part of the common vocabulary and refers to abrupt changes in behavior, especially during full moon nights. There are several scientific studies in this regard. However, almost none of them are fully consistent, only one.

Psychiatrist David Avery from the United Kingdom had a rather particular patient. He had bipolar disorder and was also quite methodical and liked to do scientific research. This is why he kept a thorough record of his extreme mood swings. When Harvey studied his patient’s notes, he noticed that the sleep fluctuations coincided with the fluctuations of the lunar tides.

The conclusion seemed to be somewhat absurd to the psychiatrist and he dismissed the subject. However, another well-known psychiatrist, Thomas Wehr, published an article in which he pointed out that 17 patients with bipolar disorder had a very striking regularity in their mood swings. Not only that, but their changes coincided with the cycles of the lunar tides. This study was based on observations he made over several years.

Then, the two psychiatrists met and joined forces. After a while, they both presented their conclusions in various forums and are in fact correct, from an empirical point of view. There’s definitely a coincidence but other scientists argue that there’s some other factor that influences this phenomenon and they just haven’t detected it.

Most of the scientific community refuses to seriously consider the relationship between the moon and behavior because there are no physical foundations to corroborate it. In addition, Wehr and Avery’s data couldn’t be replicated. There’ll definitely be new studies that will shine some light where there are still shadows.

Neuroscientist Mark Filippi Says the Moon Really Does Influence our Emotions
Neuroscientists Mark Filippi says that the different phases of the moon affect our brain's production of neurotransmitters. Read more »