Characteristics of the Cerebral Ventricular System

The ventricular system is in charge of maintaining, protecting, and structuring your brain. It also contains the cerebrospinal fluid, quite essential for your body's preservation. 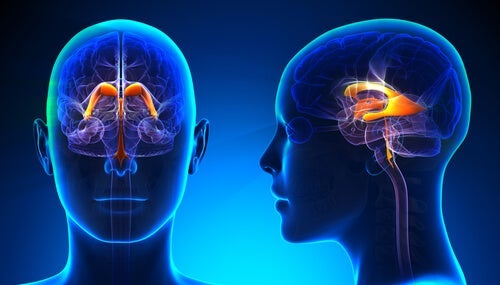 The nervous system is sort of like an orchestra conductor. Its various parts interact with one another and are responsible for various functions. Thus, some of its systems ensure its proper functioning. This is the case of the cerebral ventricular system which basically consists of small reservoirs that are connected to each other. It’s kind of like a sewage system.

This article will take you on a tour of the ventricular system and define what it consists of and explain the difference between each of its cavities and their functions. It’ll also explore some of its related alterations.

“Humor is by far the most significant activity of the human brain.”

What’s the ventricular system and what’s its origin?

The set of cerebral ventricles is the ventricular system, composed of structures and interconnected cavities. The cerebrospinal fluid (CSF) that originates in these cavities circulates and keeps the brain and spinal cord moist.

The ventricular system develops parallel to the rest of the central nervous system, facilitating the circulation of CSF during the process. The differentiation of the optic ventricle begins approximately on the 26th day of embryonic development. Later, an evagination begins in the midline of the midbrain, which later forms the cerebral aqueduct.

The development of the interventricular foramen begins around the sixth week and initiates the formation of the choroid plexus of the lateral ventricles. Then, the grooves and segmentation become more noticeable.

Finally, during the seventh and eighth week, the horns finish defining themselves and constitute the definitive vesicular form. The isthmic part compresses due to the growing cerebellum and numerous villi extend into the midline.

The ventricular system has four ventricles interconnected through channels and openings. Here’s a description of each of its parts:

The ventricles continue through the ependymal canal upon reaching the spinal cord. This cavity begins at the end of the fourth ventricle and runs internally through the cord until it reaches the first vertebra in the lumbar area.

Functions of the cerebral ventricular system

The ventricular system can suffer alterations of various types. Here are some of them:

As you can see, the cerebral ventricular system is fundamental, and its malfunctioning causes serious alterations in the body.

As we mentioned at the beginning, the cerebral ventricular system is a kind of shield that protects you from adversity. Furthermore, it does everything possible to maintain internal balance and rejects harmful agents.

Who hasn't tried to erase an unpleasant memory or a traumatic experience! However, to your brain, forgetting is more complicated…