Biopolitics refers to the mechanisms implemented from power to govern the individual lives of human beings. It does so under the guise of freedom, even while controlling their private life. 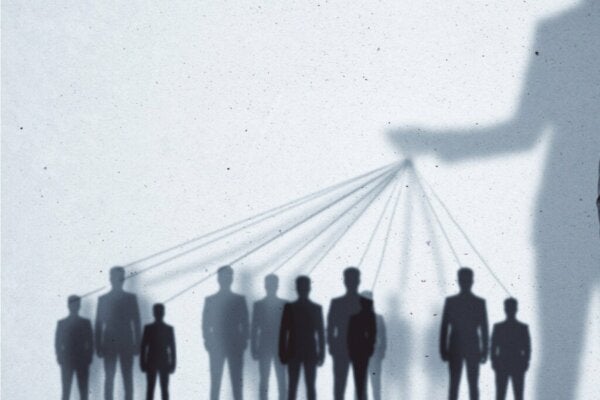 Biopolitics or the government of life is a concept by Michel Foucault. It’s related to the deployment of technologies, practices, rationales, and strategies to introduce the logic of power in people’s daily lives.

In Foucault’s perspective, biopolitics stemmed because power wasn’t enough to introduce the division of classes, private property, and the exploitation of so-called human resources. The exploited must willingly accept these rules and use them voluntarily.

Biopolitics is a factor instilled in people’s consciences that leads them to accept power effectively and meekly. In fact, they’re happy to do so. Thus, there are a series of practices applied to every individual, even before birth, that subtly lead to incorporate certain values ​​and logic in their life in order to achieve this.

“The “psychiatrization” of everyday life, if it were closely examined, might reveal the invisible hand of power.”

Biopolitics and the technologies of power

People in power implement the government of life principles through a series of powerful technologies that seek to establish control over people. Some of the tools they use, in the case of capitalism, are statistics, psychology, and sociology, among others.

From the moment a person is born, and even before that happens, they become part of a control register implemented from said powers. Right when a newborn is born, it becomes necessary to notify their birth to an institution responsible for registering them and assigning them a number.

Babies are also born in medical institutions that determine what’s “normal” and what isn’t. They examine the baby, apply a series of procedures, and classify them within a logic. Needless to say, it’ll go on forever.

Things weren’t always like this. All of these events belonged to the realm of private life in earlier times. Currently, all this ritual supposes the possibility of entering within the scope of power and receiving the rights or benefits derived from it. Even though these benefits or rights don’t exist, or materialize in many places.

It remains that way throughout life. Crucial events, such as reaching a certain age, getting married, divorced, and so on, continue to be recorded through some sort of public instrument. Why, though?

It’s basically so those in power can keep a watch on the lives of individuals. It hardly serves these to comply with rules established by the law. Those required by their community to access school, do paperwork, etc. However, in essence, they’re basically useless when done individually.

The rules of biopolitics

The vehicle through which biopolitics is made effective are the norms. In this regard, Foucault makes a differentiation between the norm and the law, as is obvious. Thus, the law governs social life, while the norm deals with individual life.

Norms don’t only determine the form of social behavior when it comes to the rights of others or respecting their space. There are also rules for feeling and dancing, even for kissing and for having sex. There’s a whole series of codes that tell you what’s right and what’s wrong in every area of your life.

Foucault says that the great success of power lies in that the technologies of power lead humans to try to conform to those norms, by all means. In other words, without questioning whether it’s right or wrong for you to do so. Furthermore, there’s the promise that everyone will be happy as long as you follow such rules.

The great success of biopolitics is that power achieves everything it wants in a subtle way. The state doesn’t tell you how to have sex exactly, but it does so through advertising or brochures. It’s all to give you the dichotomies of “good/bad” or “normal/abnormal”. For that, parents and schools must follow clear dictates. As you can see, they operate on behavior, thoughts, affections, and so on, most of the time.

Thus, from the perspective of biopolitics, a person must feel like they’re free, even when they’re not. In fact, power itself creates mechanisms to manage rebellion. There are soccer championships, video games, and high-risk activities to give you a margin of transgression.

For Foucault, critical thinking embodies the only form of resistance to that overwhelming power. The question of why and the conception of new ways of doing, feeling, and thinking are ways of limiting or reducing the action of biopolitics.

What the Future Holds, According to Slavoj Zizek
Slavoj Zizek is a prominent thinker, whose thoughts currently revolve around one idea - that the current crisis is the coup de grâce for capitalism. Read more »

Link copied!
Interesting Articles
Philosophy and Psychology
Friedrich Nietzsche and the Will to Power

Philosophy and Psychology
Dataism: Is it the Religion of the Future?

Beliefs change over time. After all, it'd be pretty pointless now to be thinking the same things people did 1,000…