Your Fate Won't Just Come Knocking on Your Door 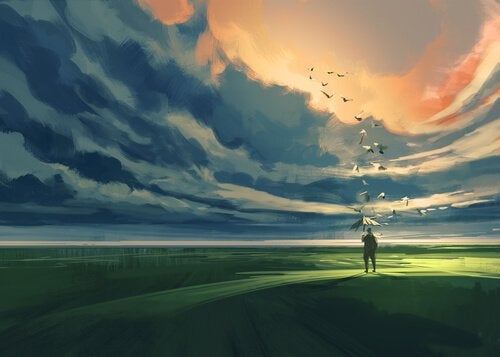 Fate doesn’t offer delivery services. If we want to meet our fate, we have to go out and look for it instead of waiting for it to come knocking on our door. Although we may think that life itself will magically satisfy our desires, our wishes won’t come true unless we work hard to fulfill them. In fact, that sometimes might not even be enough.

I’ll dare to say that the best moments in life are those where we take matters into our own hands. Those moments where we make decisions, as difficult as it may be, allowing us to choose our own path. Instead of praying or waiting for the universe to give us a sign of what to do, we should know what we want to achieve in order to start working on making our wishes come true.

“The best years of your life are the ones in which you decide your problems are your own. You do not blame them on your mother, the ecology, or the president. You realize that you control your own destiny.”

Our decisions mark our destiny

We create our destiny with every step we take and every choice we make. However, many people think good things will happen if they simply let go and just wait for fate to take charge. Now, from my perspective, that doesn’t work. The only way we can have what we want is if we work hard for it.

On the other hand, some people believe that our fate has already been written. According to this idea, the things we’re supposed to do in life have already been set. This means we’re not here by accident, there’s a purpose to our existence.

No matter what we believe in, the truth is that our fates are individual and we all create them through our decisions. The only thing we should do is fight for what we want. We all must do what we consider appropriate for our lives.

Let’s look at a story that analyzes how fate may or may not influence our lives. Enjoy!

David was a very pious and observant man, a devoted Jew. One night, while he was sleeping, an angel came to him in his dreams.

“David,” said the angel. “I come from heaven to grant you a wish. God decided to reward you, so he sent me with this message. You can ask for whatever you want. When you wake up, you’ll receive it. You’ll also remember everything that’s happening right now so you won’t think it was your imagination. So, what do you want?”

David thought for a moment and then remembered that there was something that had been haunting him for a while: his own death. He asked the angel, “I want you to tell me the exact date and time that I’m going to die.”

After hearing this, the angel turned even paler and hesitated. “I don’t know if I can tell you that.”

“You told me I could ask for whatever I wanted. Well, that’s what I want.”

“I also said it was a prize. If I tell you what you’re asking me, you’ll live your life worried, counting the days until your death,” said the angel. “That wouldn’t be a prize, but a punishment. Ask for something else.”

David thought about it thoroughly. However, when the idea of death gets into someone’s head, it’s really hard to forget about it.

The angel realized that he couldn’t do anything to make him change his mind and that, if he didn’t answer, he would be failing his mission, which was to reward David. Therefore, he reluctantly agreed.

“Since you’re a good Jewish man, you’ll have the honor of being among those who die on the holiest day of the week. You’ll die on Shabbat.”

After saying this, the angel said goodbye. David was satisfied and slept soundly until morning.

When he woke up, he vividly remembered everything that had happened just like the angel told him. He also felt relieved because he now knew was going to die on a Saturday.

The next days went by okay, at least until Friday. This day, David started shaking and feeling scared.

Would this Saturday be the day of his death? Was that the reason why the angel paid him a visit? What was the point of going to the temple on his last day? Since he was going to die, he preferred to stay home. David then understood the mistake he had made. He knew something he wasn’t supposed to and it only made him suffer.

Then, he finally thought he’d found the solution. He would read the Torah every Friday night and wouldn’t stop until he saw the first star of the day appear. The reason for this is because no one is supposed to die while reading the sacred Jewish book.

So that’s what he did. Two or three months passed and then, one Saturday morning while reading the Torah, David heard someone yelling desperately, “Fire! Fire! The house is on fire! Get out! Quick! There’s a fire!”

It was a Shabbat, and this made him remember the angel’s message. However, he also remembered that The Zohar assured that people were safe while reading the Torah. In order to convince himself more, he repeated, “Nothing can happen to me, I’m reading the Torah.”

But the voices on the street kept yelling, “Everyone get out now! Get out!”

David was shaking. This was happening to him because he tried to save himself instead of accepting his destiny. He was finally going to die. He was a victim of his own attempt to try to save himself.

“Maybe you still have time,” he tried to tell himself. While closing the Torah, he looked at the staircase to make sure it wasn’t on fire. He ran down the stairs as fast as he could, which made him stumble and fall to the floor, hitting the back of his neck on the last step.

David died instantly that Shabbat. He was so concerned about his fate that he never even realized that the house on the other side of the street was the one on fire and that the fire would’ve never reached his house.

“A person often meets his destiny on the road he took to avoid it.”

Is It a Coincidence or Fate?
Sometimes, everything seems to synchronize inexplicably, so that two seemingly unrelated situations match up, and people attribute it to fate. Read more »
Link copied!
Interesting Articles
Psychology
Effort Adds Value to Your Dreams

The effort that you put into getting what you want is what gives value to your dreams. Because when you…