You: Falling in Love with a Stalker

You tells the story of a young woman and her stalker. Are we really safe? Can the content we share on social media be used against us? What's the thin line that exists between being a mere observer or an authentic psychopath? 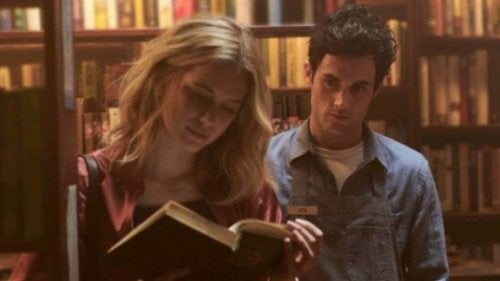 Last December, Netflix released a series that gave us a lot to talk about: You. The series was first released on the Lifetime channel. However, Lifetime canceled it shortly due to poor audience ratings. However, its creators didn’t give up and decided to sell it to Netflix. There, the series has been seen by more than 40 million viewers. Netflix has also announced a second season (although it really doesn’t need it).

You is like one of those guilty pleasures that we refuse to admit, but enjoy deep down. We know that what we’re watching isn’t one of the best series out there, but can’t avoid watching it for hours. In fact, the series portrays a serious subject, which has been studied a lot, quite lightly. However, it has an interesting and very addictive plot.

Why does You give us so much to talk about? Unintentionally, it’s almost more terrifying than any scary movie or series. Its protagonist, Joe, is a charming man, a knight in shining armor, who hides a terrifying truth. Above all, this series shows us how vulnerable we really are and the issues that can arise due to excessive exposure to social media.

You copies the format of a romantic comedy, only to destroy it subsequently. It starts off with the typical boy-meets-girl in an unusual place. However, in You, this casual encounter is anything but casual. As soon as Beck, the young woman, leaves the bookstore with a smile after meeting Joe, he begins to investigate her life and plot how to win her over.

You: A love story?

You shows us very different characters that are looking for love in one way or another. However, the idea of love and the way in which it manifests differs greatly from one character to another. In the series, we find characters who are looking for a way to love themselves, as well as characters who want to fall in love and share their life with a partner, and even some who don’t accept their homosexuality.

In short, everything seems to revolve around the idea of love. An idea that, by any means, is abstract, complex, and very subjective. For example, Joe believes in love at first sight and love stories. In turn, this makes him go to unimaginable lengths. He meets Beck in a bookstore and, from that moment on, we realize that Joe targeted her. He starts watching her from the shadows like a predator stalking its prey.

Joe doesn’t have social media accounts, but he controls Beck through them. He portrays himself as a mysterious young man who’s different and somewhat lonely. He fits into the prototype of a man who’s complex, yet fascinating. Joe acts like those princes Disney tried to sell us, the ones who will save us and listen to us.

But knights in shining armor only exist in movies. Behind Joe’s gallantry lies an authentic stalker. Some viewers have confused Joe’s toxicity with true love. Penn Badgley, the actor who portrays him, has demystified this thought by reminding us that his character is nothing more than a stalker.

Joe investigates Beck and discovers that she’s in a very toxic relationship with a young man, Benji, who seems to use her. Similarly, he also discovers that her group of friends is also toxic and that Beck constantly struggles to fit in. Joe devotes himself to eliminating all the people that, in some way or another, get in the way of Beck’s life and Joe’s plans to become the man in her life.

The truth is that his first victims, Benji and Peach, are quite unbearable. Beck’s life improves considerably when Benji is no longer a part of it. Therefore, Joe justifies his atrocious acts of love by doing them for the sake of Beck and their relationship. He murders characters of questionable morality so, therefore, it can’t be that bad.

Somehow, Joe manages to make us believe that he has legitimate reasons to kill and that love can justify anything. At the same time, we see a certain human side to him through his relationship with Paco. Paco is Joe’s neighbor, a boy who comes from a broken family. His mother is a drug addict and his stepfather is abusive. Joe helps Paco a lot, gives him books, and makes his life a little less sad.

This human side contrasts his evil side. It makes us wonder how someone who seems so nice and shows emotions can really be a stalker.

Joe worries excessively about everything. Namely, he becomes obsessed to the point that he believes his duty is to intervene and do anything to make the people he cares about happy. However, that happiness is also subjective since it’s his point of view on what should make others happy.

You and the dangers of the Information Age

You proposes something that’s completely terrifying. Anyone is susceptible to being harassed, and, at the same time, anyone can become a stalker. In a world in which we publish our lives on social media, it’s not very difficult to get an idea of the places a person goes to, their tastes, their environment, etc. Therefore, now it’s really easy to become the victim of a predator like Joe.

Since Beck is a pretty insecure young woman who seeks others’ approval and has financial and family problems, she’s the perfect target.

Nowadays, privacy no longer exists. It’s true that the image we project on social media differs from reality (we’re not going to upload a picture where we look ugly, sad, or bored). However, it’s also true that we share too much information that’s susceptible to being stolen and used against us.

In addition, there’s a very fine line between love and obsession. Who hasn’t ‘stalked’ someone at least once? Who hasn’t discovered something unexpected about someone through the Internet? Information is more accessible than ever and is too tempting to resist.

Beck also investigates Joe’s past as soon as she begins to doubt him. Are Joe and Beck any different? The difference between them is that Joe goes from being a mere observer to using information to achieve his goal. He discovers Beck’s tastes and environment. Thus, he fakes the casual encounters and begins to carry out his plan.

With the power of information, he knows what to say at the right time so Beck falls for him. But obsession is dangerous and Joe crosses that thin line, becoming the stalker we see on screen.

You is a terrifying series that immediately leads us to reconsider the content we share. At the same time, it dismantles the romantic idealism we see in movies. It proves that a fairytale prince can end up destroying your life.

The Mind of a Stalker
The objective of a stalker is to access the life of a person they want or love, even if doing so is not appropriate. Through fear, they slowly take over every aspect of their victim's life. Read more »

Link copied!
Interesting Articles
Cinema, Television, and Psychology
What a Robot Can Teach Us About Resentment and Jealousy

The turtle technique helps children with tantrums discover their emotions from an early age. In this case, we're talking about…

Culture
What's Up with the Use of Euphemisms?

The use of euphemisms is present in daily life. For instance, when layoffs occur, you hear about “strategic cuts in…