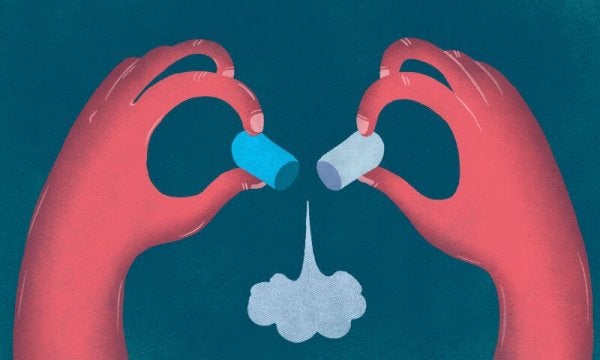 We’ve all heard of the famous “placebo effect.” You might have even experienced it in your life. There are many studies that support the concept, but the same thing hasn’t happened for its opposite, something called the “nocebo effect.” It happens in similar circumstances, but there isn’t much published research about it, making the term sound a bit mystical.

The “placebo effect” has been helpful to doctors and researchers for years now. For one thing, it’s very effective in experiments without harming the subjects. And it also helps medical specialists sort out severe pain from the much milder kind.

There are plenty of times when parents see their child express pain in a dramatic way, so they give them a candy and say it’ll help. It almost always works (of course except for the times when it’s actually really bad pain). That’s just one example that shows how the power of suggestion is much stronger than you might think.

What exactly is the nocebo effect?

But these effects disappear the moment the patient realizes they’re being given false information. The amazing neurological process that causes these changes comes from stimulation of the prefrontal, orbifrontal, anterior cingulate cortexes.

The same thing happens with our amygdala, spinal cord, periaqueductal gray matter, and nucleus accumbens. According to some MRI research, these parts of your brain affect your perception of your health.

Of course you also have to take into account the person’s attitude and how the researchers administer the nocebo. Studies about this effect usually come along with their fair share of controversy because of they can cross into unethical territory.

Prescribing a worthless treatment to a patient without telling them the truth can lead to a lot of problems. The controversy centers mostly around doctors, because it’s their job to minimize symptoms, not make them worse, and definitely not try to make them appear.

“Happiness lies first of all in health.”

The price of a medication

According to a study that recently came out in Science magazine, the price of a medication has a huge influence on people’s unconscious reaction. A group of researchers did a sample of 49 people where they gave them jars full of a kind of cream. They told those people that it was a trial for eczema treatment with two different substances. But the truth was that there was only one.

The blue jars (associated with a higher price and quality) had the same cream as the red jars (associated with more accessible medications). They told the volunteers that they would probably experience a burning feeling, because their skin was hypersensitive. They should apply it for a half an hour, and then go some place that would heat up their bodies.

However that might sound, the results were truly revealing. The people who got the cream in the blue jar said they felt more pain than the people in the other group. The reason is that they associated the more expensive cream with stronger effects. It was a psychological trick that kept repeating itself and increasing in intensity.

The researchers also discovered that their brains lit up in the exact same places as with the “placebo effect.” The main difference was in their gray matter, which lit up in different neural areas. That’s how they figured out that even though the same parts of the brain light up, the way they activate is very different.

The nocebo effect and fibromyalgia

Scientists have done similar experiments with fibromyalgia patients. After they found out that people with this disease are more likely to experience the negative effects of a drug, they decided to treat a group of them with nocebos.

These completely harmless nocebos caused so many problems for the people with fibromyalgia that a lot of them even had to stop with the treatment.

The “nocebo effect” can make you wonder. For one thing, why there isn’t more research into it? And are its effects actually so big in most people? Even though there are no studies on personality that back this up, it might be true that a person’s motivation could play a part in the results.

The people who obsess over the changes a drug will supposedly cause are more likely to feel pain. The hypochondria that came up in some of these cases can actually have a negative impact on an ill person’s symptoms. Once again, it looks like our brain is a powerful tool we all have to learn to manage.

If you can control the way you handle whatever it is you fear, you’ll be less likely to experience the “nocebo effect,”the placebo effect’s evil twin.

5 Brain Myths That You Thought Were True
We only use 10% of our brains! We've got two brains! We've all heard plenty of information about our brains but how can we separate the brain facts from the brain myths? Read more »
Link copied!
Interesting Articles
Culture
Before You Start a New Relationship, Try These 5 Tips

Culture
Neural Language Network Models: What Are They?

Culture
Discover Yourself By Valuing Your Roots

We're all on our own unique paths in life. Your roots are partly responsible for the path you're on and…