Wetiko: the "Virus" of Selfishness According to Native Americans 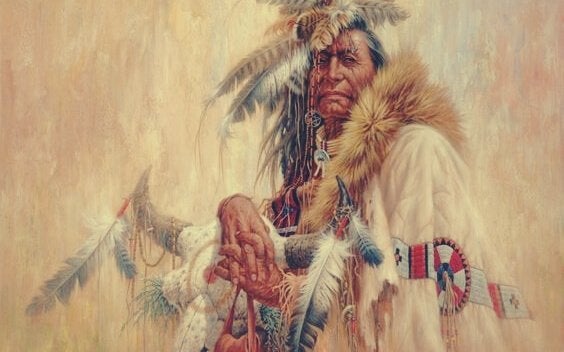 According to Native Americans, Wetiko is an evil spirit that invades human minds. It’s a “virus” of selfishness. A physic pathogen forcing the victim to feed their insatiable needs as if they were starving. It makes humanity become its own worst enemy…

This interesting yet unsettling view comes from a piece of literature we think everyone should read. Paul Lévy is an admirer of Carl Jung’s legacy and a regular columnist for “The Guardian”. He wrote a literary piece titled “Dispelling Wetiko” that deserves some reflection. Levy says that we live in an era where most psychosocial phenomena proves the existence of a “virus” of selfishness.

Wetiko is a word that Native Americans use to designate an evil person who never worries about the well-being of others.

The legacy Levy wished to leave with his book is not at all negative, reproachful, or alarming. It actually has the opposite message. Every virus seeks a host to invade and feed off of. However, each of us can put up defensive barriers. We can strengthen our psychological “immune system” to keep from being infected by selfishness.

Let’s dive into the idea now…

Jack Forbes is a historian who explained something very interesting in his book Colombus and Other Cannibals. When indigenous communities came into contact with the first European pilgrims, the Native Americans said they were infected by Wetiko. It was a tribe of the Cree in Canada who used this concept for the first time. However the Ojiwa, for example, already were using the well-known term “windigo”.

Whatever the case, the mental concept they had of the white or “civilized” man was that of an individual affected by the “virus” of selfishness. The virus led them to desire the force of nature and its resources as their own. In turn, Paul Levy explains that this idea is the very same one Carl Jung used to explain the concept of Shadow. Shadow is the archetype of the unconscious that we all share.

Thus, common things like jealousy, greed, thirst for power, and selfishness are actually products of our collective unconscious. Our darkest shadows and a “self” which has become dissociated from the conscience. A being that lets itself get carried away by despicable acts.

Therefore, we could say that the evil spirit defined by the Native Americans is different from Jung’s idea. It wasn’t something that came from the external world, bent on possessing us. Instead, it resided within ourselves.

Actually, we all carry that Shadow within, but it’s up to us whether we give it power…

How to kill the “virus” of selfishness

You can eliminate the “virus” of selfishness from your life. One way is by getting to know what Carl Jung called “daemon”, the demon of our Shadow. It feeds off of greed, envy, contempt, and the thirst for power or domination. These things have done terrible things to mankind throughout history.

The evil of wetiko has governed our world for quite some time. We give it power, we obey it, and we let ourselves get carried away by it. Like Jung explained, our responsibility is to be aware of it.

If we all let ourselves be controlled by these impulses to possess what another person has and manipulate them for our own benefit, even at the cost of harming them… we’ll fall into a collective psychosis where we would all end up losing. Selfishness is not a modern evil. It’s an old illness we still haven’t managed to eradicate.

Paul Levy enlightens us by explaining that we need reflect if we want to work on our Shadow and kill our Wetiko. At the end of the day, that inner demon is nothing more than our underdeveloped, underworked, neglected personality.

It’s a part of ourselves we’re hiding. By hiding it, we allow it to go out alone in search of nourishment. We let it feed off of greed and envy. No more! Heal from the “virus” of selfishness by working on your inner struggles, growing as a person, and dealing with the Shadow hindering you and humanity from living life to the fullest.

Self-Esteem Is Not Selfishness, Arrogance or Superiority
Self-esteem is a healthy regard for oneself. It is not arrogance or excessive pride. Read more »
Link copied!
Interesting Articles
Culture
Platonic Love: Are We Using the Wrong Expression?

Have you ever heard of the expression 'platonic love'? Usually, people use this expression to refer to a person they…

Hermann Rorschach was a physician and psychiatrist who belonged to the first generation of Freudian psychoanalysts. He became famous throughout…

This last interview with Carl Jung helps us understand the depths of his thinking, the foundation of his beliefs, and the ins and outs of his theories. Jung was a…

Culture
Before You Start a New Relationship, Try These 5 Tips