When I Want to Cry, I Don’t...and Then I Start Crying for Nothing 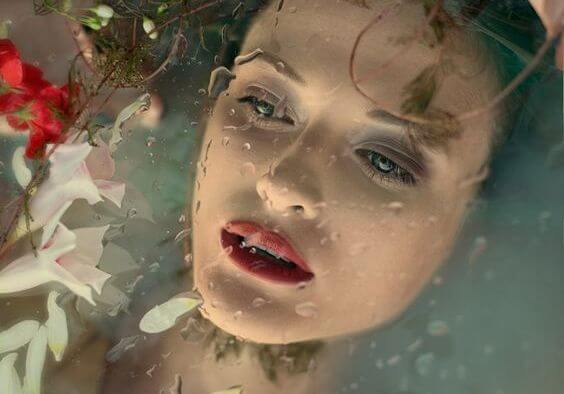 Crying is an infinitely complex act, and it’s also infinitely moving. In fact, science still offers us an incomplete answer when it tries to explain why crying takes place. In humans, it is a reaction associated with strong emotional states, whether happiness or misery. In some animals, who also let tears flow from their eyes, the same motivations apply.

Crying is basically the first way we have to manifest ourselves to the world. It’s the foundation of our communication during the first months of life. A way for us to say “I’m here” and “I need others”. It precedes language and, simultaneously, transcends it.

“The tears we spill are bitter, but even more bitter are those we keep within.”
-Irish Proverb-

Every healthy human being knows what it is like to cry. Sometimes due to a suffering for which you have no more words. Other times because laughter crosses the limit that turns it into tears. Sometimes out of simple excitement. And also at times, we cry when we experience clashing emotions, without knowing why.

When I want to cry, I don’t

Crying is a symbol that you have been affected, and that’s why it is rejected, particularly in environments where emotions are devalued as well as ones which are too authoritarian. It is associated with femininity and, thus, can be an object of contempt. But even the most macho of all the warriors started out their lives crying. And if someone doesn’t allow themselves to cry throughout their life, it’s due to an act of repression. Not because they don’t feel the need to, like everyone else.

There are times in which we feel that we’re filled with tears, but, at the same time, there’s a force that we can’t identify which is fighting to stop those tears. To keep them from dampening our eyes and falling down our cheeks. In many of these occasions, we feel overwhelmed. Like a sky covered in dark clouds, but we don’t know why that is. Other times, the force that’s stopping our tears has to do with the fear that is brought forward by our own emotions. The fear that if you start to cry, you won’t be able to stop.

The title paraphrases a poem by Ruben Dario: “Youth, divine treasure, you are already leaving to never come back! When I want to cry, I don’t. And sometimes I do for no reason at all…” This is how we feel during those moments in life in which we need strength to move forward, but a tear tells us to pause for a moment.

And sometimes you cry without knowing why…

You do so because you aren’t investing the necessary time into allowing the suffering you keep inside to come to the surface in a healthy way. We are talking about a suffering which is found beneath all of the tasks you write into your agenda. One which is manifested in every single one of them. Because it doesn’t have a time specifically set out for it to play the main role and, therefore, be able to heal.

You’re not crying about whatever is overwhelming you. Instead, you might cry when the National Anthem plays or when you stop to look at an ad, which in another emotional state would have seemed terribly corny.

Maybe what drives you to tears is a melody, a piece of literature, or even the way a dog walks. When there is unresolved suffering, anything could be a trigger for that impertinent tear. Crying when you don’t want it to happen.

Also, in moments of great inner transformations, tears can pour out at any moment. Every great change implies saying goodbye to another era, moments that will never come back. Even if these moments were filled with bad times, they were of great significance in your life. In moments of change, we become very sensitive to everything, and we tend to cry without something really motivating it.

Crying is always a healthy act. First of all, because it turns pressure into ex-pressure in your inner world. It’s good, because it liberates an inner force. When you cry, you allow this force to be drained, which produces a sensation of liberation and relief. Crying is usually accompanied by an emotional discharge and, in that sense, originates a sensation of well-being.

Emotional tears have a different composition than the so-called “basal tears”. The latter are the ones produced when the eye needs to lubricate itself. Or also, when it is irritated (for example, when you’re cutting onions). Scientists discovered that emotional tears have more proteins and more hormones associated with stress. That’s why the idea that crying is a liberating act is a statement with scientific bases.

Crying is also a language, a form of communication. It appears when words simply aren’t enough to define an emotion. Like when you accomplish something, and it is a determining factor in your life. Or, when you witness something which moves every fiber of your being. That’s why they say that crying is highly complex, since it is associated with very profound emotions. And, even so, there is no theory which explains it in its entirety.

Those who brag about not crying suffer from something that could be defined as emotional illiteracy. The psychoanalyst Jean Allouch speaks about a period of time called “dry grief”. He postulates that nowadays people don’t want to cry, even when they have obvious and worthy motives to do so. He also suggests that this limitation could be the base of many forms of depression. Crying isn’t a sign of weakness, but of spontaneity. That’s why you can fearlessly say: let the crying begin!

Link copied!
Interesting Articles
Wellness
The Most Beautiful Thing in the World is Hugging the People You Love

Sometimes we pass through time without realizing everything we have, without hugging the beautiful people that surround us. Hugging our loved…

Wellness
Traits and Functions of the 6 Basic Emotions

We have an old habit, inherited from philosophy, of dealing with reason and emotions as if the emotions could alter…

Wellness
Let's Not Be Made For Each Other

"I'm sorry, but you're not my happiness. No, you're not, and because of that I free myself. I refuse to…

An intimate relationship is so much more than just having someone to keep us company. Romantic love is a renewing…

Frustration is a universal emotion which we all experience. Just like all of the other emotions, such as fear or…