The Relationship between Isolation and Victimism

Isolation and victimism are different, and yet intrinsically linked in many ways. Find out all about this in this article! 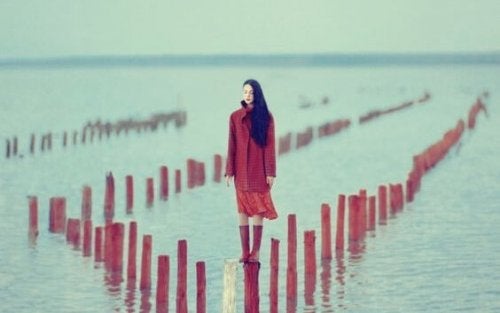 Victimism, or victim mentality, is when we draw attention to how helpless and bad we are, and it can be a very harmful attitude. In most cases, it becomes a strategy to ensure that you aren’t responsible for what’s happening in your life. In other words, we’re talking about a way of trying to avoid growing up. But what’s the link between isolation and victimism? Are they the same thing?

We may have seen this behavior in a relative or friend. They tend to isolate themselves, spend time alone, and feel bad about themselves. But what if it’s happening to you?

When a situation becomes too much for you, it’s normal to feel lost and helpless about what’s going on. This doesn’t have to be something objectively dramatic; it could be something as simple as not being able to find a job or not being invited to an event by your friends.

The discomfort that this generates can make you feel like a victim of what has happened to you. However, after a few hours or a few days, you should be able to get over it, and the negative feelings leave you. However, if this doesn’t happen, then you run the risk of adopting certain unhealthy habits. One of them is isolation.

Isolation is a form of victim mentality

When we talk about isolation, we’re referring to a voluntary act. You make the conscious decision to stay at home or to not arrange to meet up with friends for reasons that have to do directly with yourself. In these types of situations, you often tend to deceive yourself. You believe that others are rejecting you, when, in reality, you’re the one who’s avoiding social commitments.

Here, you’re the one who needs to feel that you’re important for someone, and that if you move away then the other people will look for you. If they don’t, then you feel alone, without really being alone – even before you decided to stay away.

Isolation increases the sense that you’re a victim by preventing you from accepting responsibility for the things that happen to you. But what’s the biggest influence? Is it isolation that influences victim mentality or is it the other way round?

The reasons why we distance ourselves from others

We can define isolation as shutting ourselves away and not wanting to see anyone. However, the truth of the matter is that it goes much further than that. Let’s now look at some of the reasons why we isolate ourselves and why this leads to an increased sense of victimism.

The comfort zone in isolation and victimism

One of the reasons why you find it so hard to get out of this victim mentality that you’ve adopted is that it becomes your comfort zone. You complain, but you do nothing to change the situation that you’re experiencing.

As Maximiliano Hernández Marcos rightly says in his article “Victimism: Characterizing This New Way of Life“, “This rise of victim mentality in recent decades shows that we aren’t dealing with a temporary social fashion, but rather with a dominant mentality.” Thus, if this situation is serious, what can we do about it?

When you isolate yourself instead of saying “yes” to your friends’ requests to go out at night, then your negative response is only increasing that feeling of loneliness. The only one who’s having a hard time and who isn’t happy is you.

In order to break out of this cycle of isolation and victimism, it’s very important to start adopting certain measures. We highly recommend that you get professional help in this process. They’ll give you some tools and help to get out of the hole that you’ve got yourself into, the one you believe you’ll never get out of.

The first step is the most difficult one, but it’s the most important. To begin, you have to shake off everything that’s making you feel like a victim. To achieve this, it’s a good idea is to take a good look at your beliefs, and then question them and reject those that only give you pain and suffering.

After you’ve done this, you have to make space for new thoughts and feelings. At first, this may be very difficult. You can feel very attracted to your comfort zone, which will try to convince you that you don’t feel like it, that you’re tired, or that you’re going to feel uncomfortable.

However, when you make the effort to move away from those negative thoughts, you’ll discover that it really was worth the effort!

The Culture of Victim Mentality
Have you heard about victim mentality? Do you complain or receive complaints constantly? Do you know what it means to have a victim mentality? Read more »
Link copied!
Interesting Articles
Self-esteem
3 Way to Improve Self-Esteem

The idea of self-esteem has become somewhat of a dilemma for many people. Countless books and articles talk about self-esteem it as if it were the solution to all your…

Your self-esteem should not neglected or left in anybody else's hands. Yet in today's world we feel such a need…

Do you think we're born with a certain level of self-esteem? Do you think that loving yourself is important in day to day life? Is it possible to influence your children's self-confidence?…