The Relationship Between Depression and Back Pain

Depression and back pain are often related. As you can see, those with this kind of chronic pain also have a greater risk of being emotionally unstable at some point. Why, though? 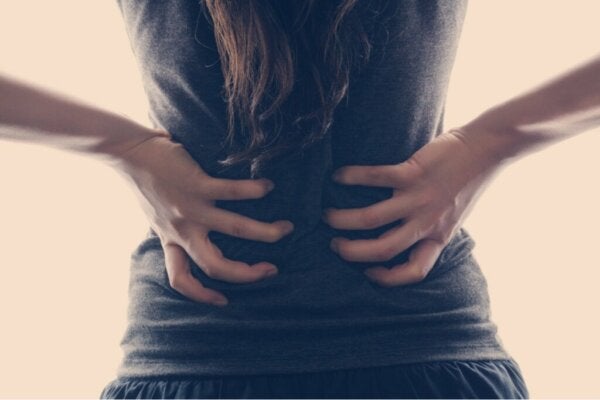 There’s a direct relationship between depression and back pain. In fact, the former tends to appear along with the latter. It’s common for a person experiencing chronic low back pain to develop a mood disorder. You may not be aware of it but these are quite debilitating and often alter the quality of life of those afflicted by them.

Thus, these are the most common and recurrent in regard to those conditions that cause the most pain at the work level. For example, it’s clear that back pain has a great impact on absenteeism and that this is a global problem. In fact, estimates indicate that almost 80 percent of people have had or will experience this problem at some time in their lives.

The same thing happens with depression. The psychological, social, occupational, and personal impact of this disorder is enormous and will be even more so in the future. Therefore, it’s a relevant problem that continues to accumulate more research decade after decade. Living with pain, be it physical or emotional, is incapacitating and affects many areas of people’s lives. Thus, it’s important to clarify the causes and improve the mechanisms of approach.

“I didn’t want to wake up. I was having a much better time asleep. And that’s really sad. It was almost like a reverse nightmare, like when you wake up from a nightmare you’re so relieved. I woke up into a nightmare.”

Factors that determine the relationship between depression and back pain

Depression, major depression in particular, is usually followed by intense physical symptoms. In addition to back pain, there are contractures, neck discomfort, headaches, joint pain, gastrointestinal alterations, etc. This isn’t new and, in fact, there are accounts of many people who experience post-traumatic stress disorder and have all sorts of physical pain.

Atkinson, Slater, Patterson, Grant, and Garfin (1991) noticed that depression and back pain often afflict veterans who return from missions in scenarios where there’s armed conflict. Thus, studies such as those conducted at the Jilin University in China, which specializes in genetic research, provide compelling information regarding the relationship between these two dimensions. In other words, mood disorders and chronic pain are often two sides of the same coin.

People are facing a major depression when low back pain is either psychological or emotional. It’s the most serious mood disorder and usually the result of a psychological entity that’s either neglected or not properly addressed.

What scientists observed through X-rays and CAT scans in these situations is that the brain regions linked to depression are the same as those related to the physical perception of pain.

One could say they experience emotional pain in the same way as physical pain. Likewise, they were able to discover that depressive states increase the production of a type of protein, pro-BDNF. This molecule releases in the spinal cord, elevating the perception of pain, especially in the back area.

Freie Universität Berlin and the German Health Service conducted a study of more than 43,000 people over a year. They wanted to understand the link between depression and back pain. One thing they observed is that this reality is more common among women, especially after the age of 50. Likewise, they also observed it affected people who received less emotional, social, and psychological support.

Thus, sometimes, people can spend long periods of time neglecting this mental state. This depression makes a dent and worsens their emotional state. Finally, the psychosomatic symptomatology elevates and mostly affects the back.

Similarly, it’s evident that people with chronic low back pain also have a greater risk of developing a mood disorder. The pain, the limitation in carrying out basic tasks, of being able to work normally, and a diminished daily routine eventually affect their state of mind.

How to treat depression and back pain

Medical professionals advise using an interdisciplinary approach when dealing with depression and back pain. It’s important, above all, to make an adequate diagnosis and detect the possible presence of other physical or psychological conditions. The following approaches are generally useful:

Professionals are still developing exciting programs. In fact, research such as that conducted by Gatchel, RJ, and Turk indicates the need to achieve “mental deconditioning” in patients. What this means is there are times when a person feels completely conditioned by pain and subordinate to their own suffering. Thus, they fail to manage to advance and their depression intensifies.

Finally, it’s necessary to work on that perception and reality in order to achieve small daily advances.

The Relationship Between Emotions and Physical Pain
Have you ever had a headache after a fight with your significant other? There's a reason. Emotions and physical pain are closely linked. Read more »
Link copied!
Interesting Articles
Illnesses
Surviving Cancer and What Happens Next

A couple of years ago, there was news about the brain-eating amoeba. In fact, some newscasts announced that several people…