The Origin of the Three Kings

The Three Kings are mentioned in the Gospel of Matthew. His Gospel reads they came from the West looking for the "King of the Jews", guided by a star. 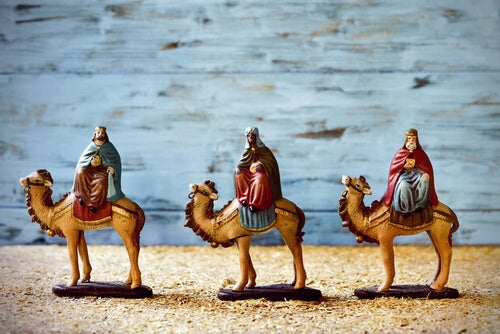 Although traditions related to the Three Kings are well-established in society, their origin remains a mystery for many people. In Spain and Latin America, the Three Kings Day is one of the most widely-celebrated holidays of the year.

Furthermore, these Biblical figures have inspired numerous works of art and painters and sculptors from around the world.

The children’s legend tells that three Magi came from the West following a star to leave their gifts in the people’s homes. These Magi were rich kings with abundant treasures, who decided the children they’d leave their gifts for and what each child deserved. In the past, children also wrote letters to the kings, telling their wishes and how they’d behaved that year.

The tale of the Three Kings brings magic to children throughout the holiday season, and particularly on the night before Three Kings Day. It’s also a time for the adults to feel the magic as they share the joyous excitement of their children and many participate in the gift-giving tradition themselves.

However, what’s the origin of these three Magi? Where did the tradition of celebrating Three Kings Day begin? Finally, how’s the holiday celebrated in Spanish-speaking nations around the globe?

The origin of the Three Magi

The Three Kings, or “Wise Men”, are mentioned in the Gospel of Matthew, though specific names and dates aren’t mentioned. His Gospel tells that the Magi came from the West looking for the “King of the Jews”, guided by a star. The star led them to baby Jesus in Bethlehem, to whom they presented offerings of gold, frankincense, and myrrh.

The three Wise Men are first mentioned in the 3rd Century BC. However, Origen of Alexandria, a well-known writer and Christian theologian, is the first to connect the three kings to the three offerings presented at Jesus’ birth.

In the 6th Century AD, Andreas Agnellus gives the names of the three Magi in his work entitled Pontificalis Ecclesiae Ravennatis. Their names are Caspar, Balthazar, and Melchior, and they represent different ages (youth, maturity, and old age, respectively).

The word “Magi” comes from Persian and means “priest”. Subsequently, the Greek word “magoi” referred to those who studied the stars in search of God. The Greek translates to Latin as “magus”, from which the Spanish word “mago” was derived.

The beginnings of the tradition in Spain

In the 19th Century, the tradition of Three Kings Day began in Spain as a celebration for children. Also, the holiday is related to the celebration of St. Nicholas or “Santa Claus”.

The “Night of the Kings”, also known as the Twelfth Night, refers to the twelve days after Christmas and is celebrated on the night before the Epiphany. This is the night when the Kings leave their gifts in the children’s homes.

In 1866, the city of Alcoy (Alicante, Spain) celebrated the first parade for the Three Kings. The tradition spread to the rest of Spain and, later on, to other countries, particularly in Latin America.

The history of the Three Kings, according to the Bible, dates back to the birth of Christ.

The tradition of the Three Kings in art

The Three Kings have had a strong influence on art over the centuries. Their history has inspired many artists, including Sandro Botticelli, Leonardo da Vinci, and Hieronymus Bosch’s work Adoration of the Magi.

The legend of the Magi has influenced architecture around the world. There’s a particularly strong presence in Spanish architecture. For example, Romanesque portals on the facades of churches in both Burgos and Soria depict scenes of the Magi.

Have You Ever Heard of Jerusalem Syndrome?
Jerusalem syndrome is a psychic illness affecting tourists who visit Jerusalem as well as those who live there. They imitate biblical characters and more... Read more »
Link copied!
Interesting Articles
Curiosities
What's Murderabilia?