The Life of Ryszard Kapuściński, a Famous Journalist

Ryszard Kapuściński was the kind of journalist who put his vocation ahead of his own life. He courageously reported on some of the bloodiest conflicts of the 20th century, providing his readers vital information in his own poetic and profound way. 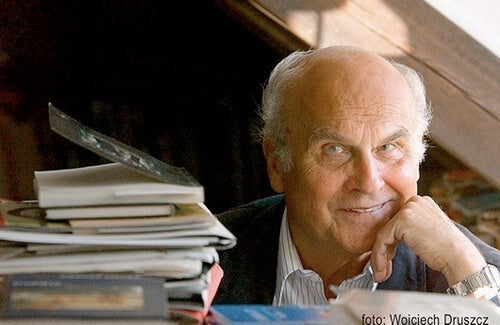 Ryszard Kapuściński was one of the most important journalists in the world. He embodied the classic idea of the reporter who risks their own life in order to get first-hand information. Over the course of his life, he witnessed 27 revolutions and was on the frontlines of 12 wars. He also survived four death sentences, malaria, and tuberculosis.

One of the most noteworthy aspects of Ryszard Kapuściński’s work is that he didn’t focus his journalism on the people in power. Instead, he was a voice for the powerless. He sought out and reported on how the historical events of the world were affecting the very heart of the societies where they happened.

“Our salvation is in striving to achieve what we know we’ll never achieve.”

He wrote about 30 books during his lifetime, in addition to countless articles, essays, and poems. Not only was he a thorough researcher but also a wonderful writer. Critics tend to agree that his best book is one of his travel memoirs, The Shadow of the Sun (The Polish title is Heban, which literally means “ebony”). The book is a collection of articles that narrate the fall of colonialism in the African continent. Other books, such as The Emperor, The Soccer War, or Another Day of Life have also captivated readers all over the world.

No one has written the definitive biography of Ryszard Kapuściński yet, so there’s still a lot about his life we don’t know. Nevertheless, in his own book, Travels with Herodotus, he talked about his childhood. We know he was born on March 4, 1932, in the Polish town of Pinsk. Today, Pinsk is part of Belarus. Kapuściński writes that it was the poorest area of Poland, and possibly all of Europe.

Poverty and war were part of his life from the moment he was born. He talks about going to Warsaw, a city he always loved when he was 12 years old. He went there, and to many other Polish cities and towns, as a refugee. His family had to constantly move around, fleeing from one armed conflict to another.

Being poor and displaced as a child completely shaped his perspective of the world. From a very young age, he knew that his destiny was to “cross borders”. That’s why he was such an insatiable traveler. “The meaning of life is to cross borders,” Kapuściński once said. He also held a special fascination for third world countries because they reminded him of his own childhood.

A traveler and reporter

Ryszard Kapuściński studied history, but he was a reporter at heart and he figured that out fairly quickly. He started working for a small newspaper. When he was 32 years old, the Polish Press Agency hired him as the only international correspondent on staff. That’s when he started on a journey that eventually took him to Africa, Asia, Europe, and the Americas. It didn’t take long for people to start admiring his work.

In a posthumous biography, the only one written so far, the author writes that Ryszard Kapuściński was actually a member of the secret intelligence service for the Polish government. No evidence exists nor has anyone come forward yet to confirm or deny this information.

Even if it were true, it wouldn’t discredit his work at all. He always showed the utmost professionalism. He wrote beautifully, and dedicated himself to recording and sharing the stories of the poorest and most marginalized people. Ryszard Kapuściński had a research method similar to that of a spy. He dove into his subjects with a passion and kept digging until he found the details that helped fully illustrate the truth.

Over time, Ryszard Kapuściński’s fame spread to the rest of the world. Gabriel García Márquez personally invited him to become a teacher at his Foundation for a New Ibero-American Journalism. He was also a professor in many universities and gave countless lectures. In addition, he won several prizes for his work.

He fervently believed that you have to understand a story in detail before you can report it. Kapuściński never covered something without learning about its history and getting an accurate idea of the causes and consequences of the issue. He was the kind of reporter who was on the ground in crisis zones, reflecting critically on the most relevant events of his time. He told these stories in such a way that made them accessible and understandable to a wide audience.

Many journalists today seem to be obsessed with fame and focused on trivialities or whatever is trending at the moment. Ryszard Kapuściński stands in stark contrast to that interpretation of journalism, and reporters today could stand to take a page from his book. Not only was he passionate about his profession, but he also had a strong moral compass. His priority was always the truth and delivering the truth to the public.

George Berkeley: Biography and Works
George Berkeley, the father of philosophical idealism, laid the foundations of a new world view for the study of objects and their relationship to our mind. Read more »
Link copied!
Interesting Articles
Biographies
Sabrina Spielrein, from Patient to Psychoanalyst