The Benefits of Sensory Deprivation Tanks

These days, sensory deprivation tanks are everywhere. Proponents say that the experience is like returning to the womb: your mind goes blank and you can truly and deeply relax. 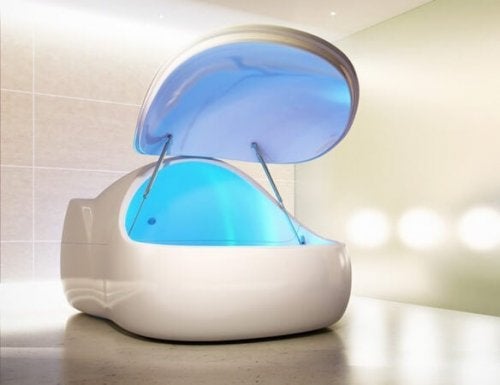 Sensory deprivation tanks, also known as isolation tanks or flotation tanks, go in and out of style periodically. Although they were originally invented to study the brain, these days people use them as a form of relaxation. Many companies specialize in sensory deprivation experiences and many spas offer them as well.

Proponents of sensory deprivation tanks say that it’s like being back in the womb. They’re probably exaggerating a little, but people who use them a lot describe the experience as unique. The tanks seem to offer the opportunity for extreme relaxation.

The tanks have their detractors as well. Some people approach the experience with some apprehension. They feel anxious about completely disconnecting from the outside world. Those who manage sensory deprivation tanks say that you need a certain level of emotional stability and maturity to have a good experience.

“Whilst part of what we perceive comes through our senses from the object before us, another (and it may be the larger part) always comes (in Lazarus’s phrase) out of our own head.”

The invention of the sensory deprivation tank

The isolation tank was invented by John C. Lilly, a neuropsychiatrist from the United States. His goal in creating the tanks wasn’t to make a successful business. Far from it. He wanted to study the changes that happen in the brain during isolation.

In the 1950s, these kinds of subjects captured the attention of many scientists, Lilly included. He created what he called “sensory isolation chambers”. He designed them to reduce the senses to the absolute minimum.

Lilly proved that his inventions did indeed provide a very special experience. Being inside them was very relaxing and rejuvenating. Nevertheless, no one in the scientific community took his research seriously because Lilly was an outlier. Other scientists thought he was an eccentric who just wanted attention.

Lilly’s idea didn’t gain much traction at first, but over time people became more interested in it. Researchers started experimenting with Lilly’s sensory deprivation tank and discovered that it maybe wasn’t such a crazy idea after all. In fact, they saw the potential for therapeutic applications.

At first, researchers studied the tanks for military purposes. Their potential to help strengthen the body and mind seemed evident and several marines underwent sensory deprivation therapy. Later, NASA used the floatation tanks as part of their astronaut training program.

In the 70s, sensory deprivation tanks started to become more widely popular. High-performance athletes were the first to use them for muscle recovery. Then, the spa and relaxation market saw their potential and began to incorporate them into their services. In a world of highly-stressed people, they seemed like a great business choice.

Sensory deprivation tanks contain between 400 and 600 liters of water. At least half of that volume is made up of Epsom salts (magnesium sulfate). The high salt concentration makes your body float naturally, like in the Dead Sea.

The water is similar to body temperature so you don’t feel hot or cold. In some cases, the tank has a door that closes so you’re completely enclosed. In that case, you float in total darkness and total silence.

Other sensory deprivation tanks stay open, but the light in the room is low and there’s no sound. In general, you stay in the tank for 60-120 minutes.

Research indicates that using these tanks causes positive changes in the brain. First of all, when your senses are deprived in this way, your brain exhibits activity similar to what happens when you’re meditating. As a result, it’s a very relaxing experience.

These tanks can also have health benefits. They can help relieve muscle pain and prevent chronic issues such as migraines or menstrual cramps. People suffering from anxiety can also find relief from this kind of therapy.

On top of all these purported benefits, proponents argue that sensory deprivation tanks also stimulate creativity and increase intellectual capacity. While a small minority complains that the experience is boring or uncomfortable, most who try it become repeat customers. Since it doesn’t seem to have any negative side effects, what are you waiting for? You might just get hooked.

Have You Heard of Snoezelen Multi-Sensory Stimulation Rooms?
You might've heard about Snoezelen rooms before. They're based on a concept of multi-sensory stimulation are part of a revolutionary new form of therapy. Read more »
Link copied!
Interesting Articles
Therapies
Lack of Sleep and Anxiety: A Bad Combination

When you're open to exploring the world, you can let yourself go by using your senses. One of the most…