The 7 Social Sins According to Gandhi 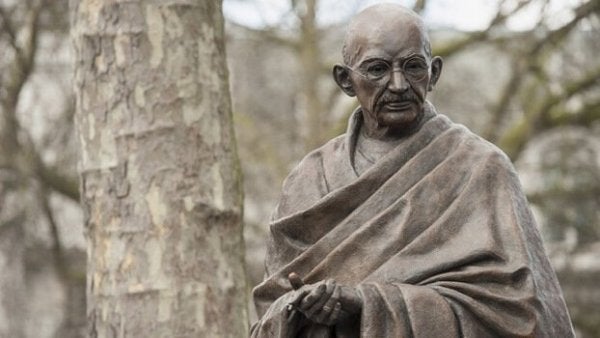 Gandhi’s 7 social sins are a comprehensive list of behaviors that cause serious harm to society. Convinced that morality is a superior force, the spiritual and political leader created a list of factors that degrade it in order to warn against them.

Morals are a set of values that include religious, civic, and family virtues. Gandhi exhibited a combination of these virtues as an ethical guide for society to follow.

“Strength does not come from physical capacity. It comes from an indomitable will.”

Gandhi’s social sins refer to behaviors that go against this ethical code and thereby weaken society. When values are not strongly held, people respond weakly to crisis and difficulty. The following are the biggest social sins that Gandhi warned against.

When you see the word politics, you automatically think of politicians. It’s common to criticize politicians and label them as corrupt, and to use this as an excuse to not participate in politics.

However, we often forget that we’re part of that group of people ourselves. If the system is maintained, it’s because of our own action or inaction. We’re all involved in politics either actively or passively. The question is whether our participation contributes to strengthening values in politics or not.

Ambition is another factor associated with social sins. When you only think about your own well-being, you can justify almost any action. Personal success becomes an excuse to take horrific actions.

Even people who think they’re “good” end up hiding behind the excuse that they “have to be practical.” They label people who bring up morals and values as idealistic and naive. But all this does is blur the line between right and wrong and uphold the law of the jungle.

Work is not just a way to earn an income; it also gives you dignity. Living off of other people’s work, however, degrades your character and turns you into a social parasite.

Your well-being should be a product of your own effort. And in fact it is. When people live without purpose, they don’t tend to feel very good about themselves. It’s usually quite the opposite: they feel insatiable, unsatisfied, meaningless.

Education is an comprehensive process, and denying that fact can lead to another social sin. Educating is more than just instructing, training, cramming knowledge into people’s minds, and making them an expert as if they were a machine.

Those in charge of educating and training people should be firm in the values that they ingrain. Inconsistency is a terrible message for someone in training to receive.

While science serves humanity in principle, there are many cases in which it does not. Examples are when inexact or false information is spread, hiding behind fraudulent research, or when unethical experiments are done on people and animals.

It’s completely legitimate to seek pleasure. Everybody has the right to do things that are pleasing to their senses and their soul. But if they occur in excess, the same pleasures can cause a lot of harm.

Gandhi had a stoic view on the matter. He believed moderation to be one of the greatest virtues. Having fun responsibly means maintaining balance, rather than letting it become a vice that messes with all your other values.

Although Gandhi talked exclusively about religion, in this case the principle can also be applied to any type of spiritual belief, religious or not. When you profess a belief, you should be prepared to turn what’s in your mind and heart into action.

Religion without sacrifice is a social sin because beliefs without action lose most of their value. When you truly believe in something, you should be prepared to give up a lot for it.

These are the seven social sins that Gandhi warned against. It’s important to spend your life fighting against these behaviors. And even more importantly, everything you achieve should be done by putting your principles into action and using their moral strength like a suit of armor.

Revenge Makes the Whole World Blind
there would be enough ears that were ready to listen to and understand his message. His warning about revenge is easy to understand, but difficult to apply. Read more »
Link copied!
Interesting Articles
Interviews
Interviewing Dr. Manuel Antonio Fernández: Pediatric Neurology and Child Development

After our interview with Dr. Manuel Antonio Fernández, we realized that we'd discovered one of the best pediatricians in Spain.…

Artificial intelligence is developing in unprecedented ways and its future is unpredictable. Facebook announced recently that they had to deactivate one…

Have you ever felt lost or overwhelmed? Almost everyone feels like they just can't cope sometimes. During these times, negativity often…

Culture
The Borromean Knot in Psychoanalysis

As psychoanalysis is complex, many experts use metaphors and analogies to make ideas easier to conceptualize. One of these analogies…